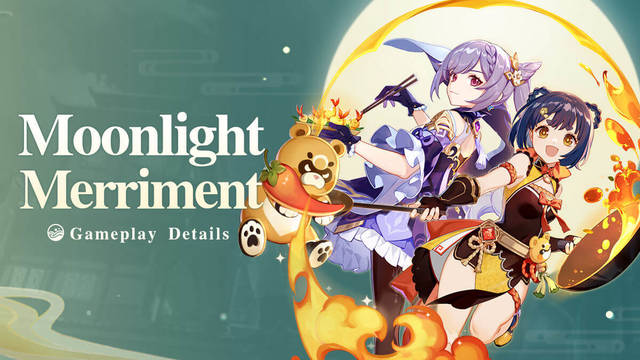 The new event "Moonlight Merriment" is about to begin!

The autumn moon shines bright, and Liyue Harbor is hard at work preparing for the traditional Moonchase Festival. The preparations for various activities based on the festival's theme are well underway.

New missions have also been added to Moonchaser. Complete them to receive BEP.

Adventure Rank 28 or above

This event is divided into three stages: "Path of Stalwart Stone", "Path of Gentle Breezes", and "Path of Austere Frost." At the beginning of each stage, the corresponding quests or challenges of the stage will become available.

When the collection progress of the designated area reaches a certain level, you can obtain rewards such as the event-exclusive claymore, Luxurious Sea-Lord as well as its refinement materials, Weapon Ascension Materials, Mora, and Festive Fever. Additionally, you can obtain Primogems when you open Mystmoon Chests.

Travelers can go to Linyang in Liyue Harbor for clues daily. Linyang will mark the location of some of the Moonchase Charms and Mystmoon Chests on your map that were not found in order to aid you.

When the accumulated delicacacies offered reach a certain amount, Travelers can get the corresponding "Trail Comforts." Trail Comforts can greatly help you in battle, but these buffs will only work during the Trail of Delicacies challenges.

Each of the three Trail of Delicacies areas has different Trail Comforts, and the Trail Comforts in one area will not take effect in another.