You can read the official notice for the event here!

The event will have 3 quests that are time locked during the event, all running until the 28th February:

Within Lantern Rite there are sub-events; Lantern Rite Tales, Theater Mechanicus, Xiao Market, and Stand by Me. The criteria for each event are as follows.

Complete the quests in "Lantern Rite Tales" to earn Primogems and increase the Festive Fever measurement. Festive Fever is needed to unlock rewards and further parts of the event. 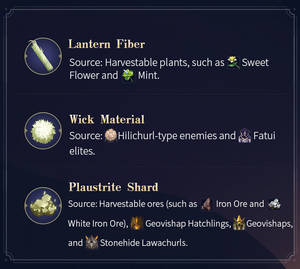 You need to have completed the quests "The Origin of the Lanterns" and "Liyue: Theater Mechanicus" to unlock this minigame. The levels can be attempted in Single Player, or as a 2 member Co-op party.

Each attempt at Theater Mechanicus costs 1 Xiao Lantern, which will be consumed whether or not you are successful. Xiao lanterns can be crafted using plants, ores, and monster drops.

As you progress through the Lantern Rite Festive Fever levels, you will unlock new maps, new mechanici, higher upgrade levels, and higher difficulty levels, as well as new Theater Mechanicus challenges. If you complete the challenges you'll win Peace Talismans which you can spend at the Xiao Market.

Here you can spend the Peace Talismans earned from Theater Mechanicus to receive the following rewards:

Once you've reached the Festival Fever stage "Glow of a Thousand Lanterns" and have spent 1,000 Peace Talismans in Stand by Me to receive one of the following 4* Characters: