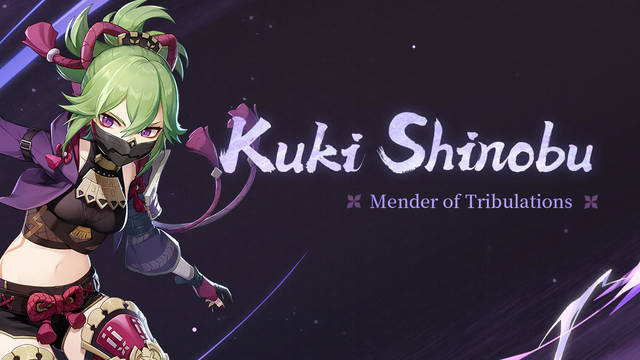 Today Genshin Impact will be introducing a new character, we'd like to introduce you to the deputy leader of the Arataki Gang — Kuki Shinobu!

Her primary responsibilities are to bring in business and maintain a stable team... uh, as well as bailing out the gang from the Police Station, returning snacks and toys to kids, and catching anyone secretly slacking off during a job...

Although Kuki Shinobu joined the Arataki Gang at a later stage, she is a powerful figure who transformed the whole gang. After she arrived, the gang's business scope expanded to all walks of life, including but not limited to: legal consultation, business negotiation, banquet catering, clothing customization... What's even more surprising is that the lackadaisical Arataki Gang was able to produce all the relevant practice certificates, all signed with the same name: Kuki Shinobu. It is said that this second-in-command had studied abroad, and it is also said that she has close affiliations with the Tenryou Commission. When outsiders hear this, they inevitably have many suspicions. However, the residents of Hanamizaka who often deal with the Arataki Gang are different, and they always go to her for advice on various matters without any reservations. In their opinion, discussions with Kuki Shinobu are always smooth and efficient. Just always keep in mind the following two rules: One, do not attempt to find out how she looks like under her mask. And two, don't ask why she has to steer clear of the Grand Narukami Shrine every time she heads out for a job.

Talents
Kuki Shinobu is a support character who wields a sword and uses her  Electro Vision to both heal teammates and deal continuous damage from off the battlefield.
She could do it all! Her unique skills allow her to sacrifice her own HP in combat in order to heal other party members.

Sanctifying Ring
She sacrifices a certain portion of her HP to create a Grass Ring of Sanctification that will heal friendly characters within it and deal continuous Electro DMG to surrounding opponents. After unlocking the Passive Talent Heart's Repose, her Elemental Skill's healing and damage will be boosted based on Shinobu's Elemental Mastery. With another Passive Talent, Breaking Free, when Shinobu's HP is low, her Healing Bonus is increased! Travelers will need to monitor her HP when using her skill.

Gyoei Narukami Kariyama Rite
Creates a special field in front of her that deals continuous Electro DMG to opponents within it.

Passives
With Protracted Prayers, she gains increased rewards when dispatched on an Inazuma Expedition for 20 hours. 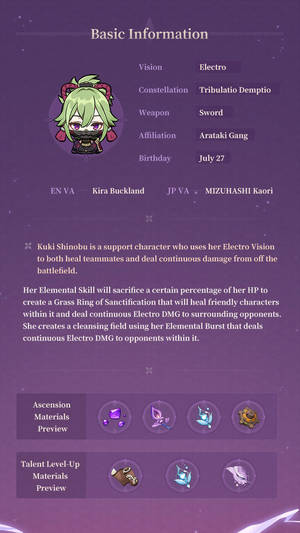 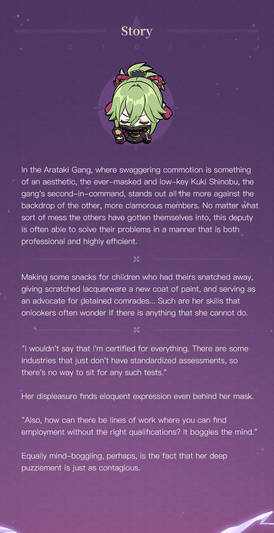 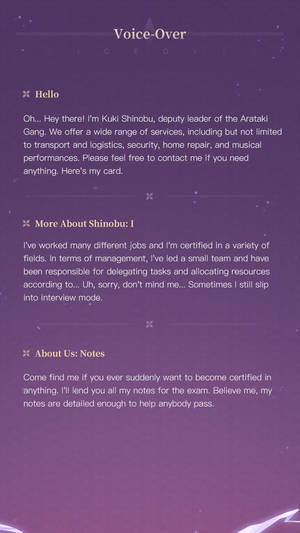 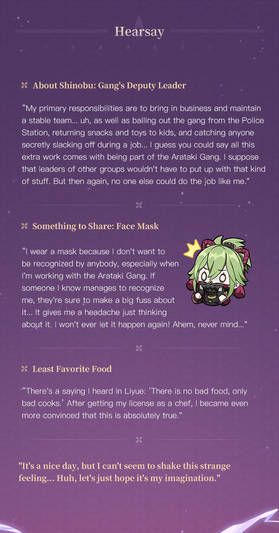