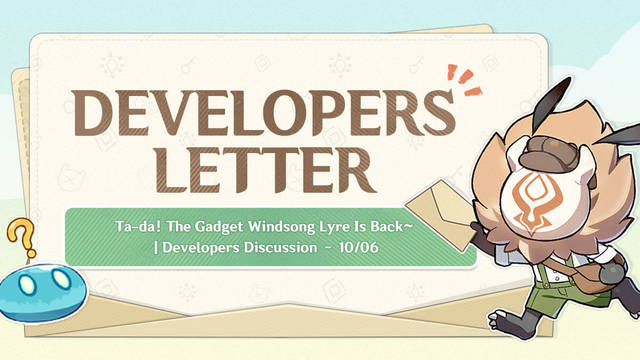 A new Developers Discussion is here~ Let's see what they have in store for us!

Q: Is there any way to obtain gadgets from events that I've missed? I regret missing out.

A: For Travelers who have missed out, don't worry. In Version 2.2, Travelers can use Mora to purchase the Windblume Festival Commemorative Balloon, Windsong Lyre, and Wind-Blessed Harpastum gadgets from Marjorie's store in Mondstadt~

A: In Version 2.2, we have also worked to optimize this. We will reduce the opacity of some effects that will obstruct the crosshair when bow characters switch to Aiming Mode.

Q: Can the previously chosen options be saved in Hangout Events? It's a bit tedious when I'm trying to get all the different endings.

A: This optimization will be implemented in Version 2.2!(*’U`*) Starting from Version 2.2, when the same device is used for a Hangout Event, the previously selected options will be saved.

Q: Controllers for PS5 don't work very well on PC. When will support be added?

A: In Version 2.2, we will increase the HP and movement speed of the transported goods, so that Travelers will be able to complete the quests faster.

Q: Raiden Shogun's Elemental Skill, Chakra Desiderata is too bright if you look at it for too long.

A: In comparison to Version 2.1, in Version 2.2 we optimized Raiden Shogun's Chakra Desiderata by reducing its brightness in various lighting environments.

Q: Is it possible to add photos as wall furnishings for the Serenitea Pot?

A: "Photo Frame" Furnishings are currently under development. In future Versions, there will be new interior furnishings that can display the Hangout Memories of Hangout Events. Travelers can select Hangout Memories according to their preferences to display in their realms~

In addition, the developers have already taken note of the request for "furnishings that play music" and recorded it in the feedback collection~

Q: Could we see the lineup of enemies when we are forming our party in the Spiral Abyss? It is very difficult to remember the enemy lineup when forming my party.

Q: Is it possible to restore my default team after exiting Co-Op Mode? I have to do it manually every time.

A: The development team is working on it. In a future Version, when Travelers switch from Co-Op Mode back to Single Player Mode, their default party will be restored.

In Version 2.2, we are also fixing an issue in Single Player Mode whereby the duration and cooldown of opponents' skills would not stop after the game was paused.

After the fix, some enemies will no longer be able to switch to another skill as quickly when Travelers pause the game. For example, when facing the Primo Geovishap, it will no longer be able to use the time the game is paused to execute its "Primordial Shower" skill multiple times in a short amount of time. Another example would be when facing Maguu Kenki and Childe. In this case, enemies will not be able to take advantage of the pause to use skills that deal high amounts of damage.

Similarly, after the update, some enemies with different attack phases will not be able to change phases quickly just because the skill duration cannot be paused. For example, before the update, when facing the Oceanid, if Travelers paused the game, this pause did not affect the Oceanid's skill, so when the game was resumed, the Oceanid could enter into the next phase of attack quickly. After the fix, similar issues will no longer occur.