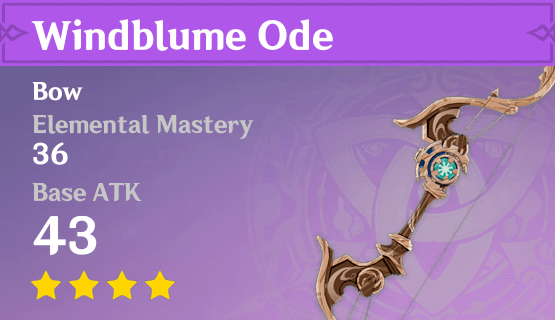 In the childhood dreams of Mondstadt, there was a certain breed of floaty flower,

That would grow lushly even amidst the mighty winds, terrible winters and wild whipping ice.

It was unlike those normal plants, which would blow away, roots and all, by the powerful gales.

Indeed, this "Windblume"'s roots would grow stronger even as the wind grew wilder.

Today, the rebellion of ordinary mortals against tyranny has long been consigned to festive jests,

And the shape of that flower has grown faint, melding into the lilting lyre-tunes of histories long gone by.

"Let me give you this nameless flower, and may the spring-times you never saw mean nothing to you."

"Pray repay me with hope and a smile, and stand with me to welcome the day when the storms blow no longer."

In the days when a tyrant gazed down upon the common folk from his tower, those who nursed freedom in their breasts would greet each other thusly.

Those who sought courage and dreamed of walking upright wove the unknown, using this as their secret sign.

In those days, a lonely and fragile flower would come into bloom with the wind before slowly blossoming all across the wild mountain ranges.

So too did rootless and indifferent subjects content to go with the flow become proud, fearless heroes.

The frowning lord in the tower grew ever lesser in stature, and could no longer disperse the swelling, raging tide.

"Let me give you this nameless flower, and may she crown us champions, defenders of spring and sky."

"May the dawn be our spirit and follow us into the winds of true freedom."

Atop the ruins of the ancient tower, amidst the cheers, songs, and tears of those who had newly won their freedom.

A red-haired warrior turned his back on the newborn god, hidden like a single raindrop in a tidal wave of humanity.

He was first among those who passed the secret sign of Windblume, the one who wove threads of dawn throughout the long night.

His name has since been lost to time, but his deeds are still remembered in song.

A thousand years later, another red-haired knight would follow in his footsteps, and bring light to the then-benighted history of the nobility.

Just as the fate of the Windblume is to bloom under great pressure when the need to arise is most desperate,

The fate of this clan will likely never change: they shall ever live in the darkness and bring forth the flame of dawn.

The shape of the Windblume has been lost amidst the flowing winds of time.

In times of peace, its name has become synonymous with love and gladness.

But surely, this must have been the desire of those who walked stalwartly through the darkness...