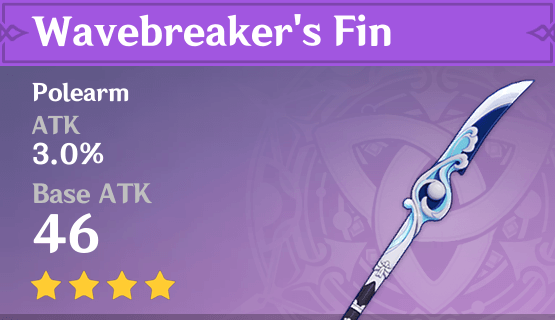 The naginata of "Umigozen," the mighty warrior of Watatsumi. Its edge flows with the phosphorescence of the depths.
The way this person once made the navies of Narukami quail are well-recorded in the island's music.

The whalesong that the twin Watatsumi shrine maidens once sang followed the tide's flow into the dreams of the island's people.
All of Watatsumi's warriors pinned their hopes and will to fight upon their shoulders.
And they brandished their nagamaki like a white, flowing wave, and with a loud shout advanced upon the other islands.
Yet the glory of Omikami and that of his warriors were dimmed by the lightning's glow...
Mouun was consumed by a dark storm of crow feathers, and the great whale who sang with the sisters sank to the bottom of the sea.
The vassal ruler, determined as a child, the vanguard of their forces, vanished into a rift rent into the very earth itself.

"Umigozen" was lost to the waves, becoming a myth to the archipelago at large.
Some say that she dove alone into the press of tengu warriors to reclaim the bodies of her comrades, and was lost after a valiant last stand.
Others say that she hid thenceforth, steering her flagship into the Dark Sea at the borders of the world...
The only proof that she once sought to change the tides of the world is this still-sharp naginata.

As long as the seas are yet disturbed by the waves, so too might the memory of her song live on.
Legend even has it that the song yet echoes within seashells and the bellies of mighty whales at the bottom of the sea.