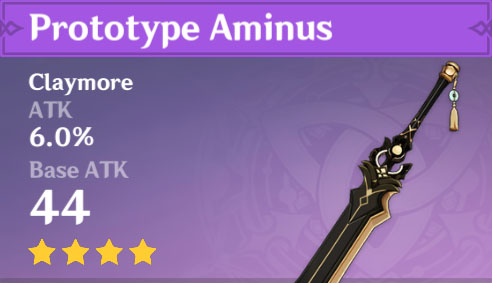 An ancient prototype greatsword from Liyue's arsenal. The batch number has faded and no records exist to confirm the date of production.
Weighing in at close to forty pounds, this weapon's hilt is made from a rare ore, while the blade is forged from the finest steel. All you will see when it is swung are blinding flashes of light, powerful enough to devour the clouds and blot out the moon.

After the great disaster, the Yun family forge joined forces with master craftsman Han Wu to find a way to push past the constraints of contemporary blade design and revolutionize their craft.
Thus was born a new series of weapon models, simply named "the prototypes." The first greatsword built using the new design was unusually understated in its final appearance.
The underwhelming sight of dull, blotchy gold masked the weapon's true strength. While not much to look at, any who cared to try it would discover that it was weighty but not unwieldy.

Han Wu, the master craftsman who forged the weapon, traveled north through the night to hand the sword over to a martial artist who followed the chivalric code.
The martial artist inspected the blade closely before trialing it. The blade howled like the wind and in an instant decimated the entire bamboo forest. It was a rare sight to behold.

The martial artist said to Han Wu, "This blade is endowed with the elegance of antiquity. It is of equal value both as a weapon and an ornament."
"Such a fine creation possessed of both scale and subtlety is worthy of a prestigious name. May it be known as Archaic."
Due to its unparalleled strength, this sword subsequently became the model for thousands of greatswords in Liyue.