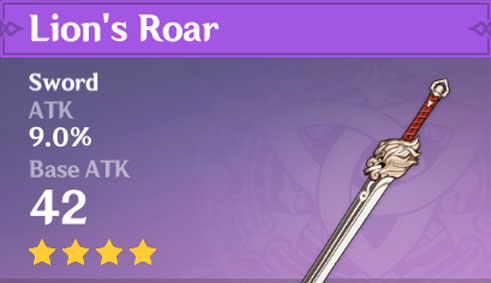 Rumored to be a legendary sword of Liyue.
It was said its sheath was made with eaglewood, decorated with mica, and engraved with the imagery of war.
This priceless sheath, however, was lost.
To the blade, the sheath was its prison, keeping it from its true purpose.
The blade is so sharp that its victims would only realize they had been struck an hour later.

It is said that Kunwa forged this prized sharp sword in just one day, though he worked all day and all night to do so.
But when Kunwu's aged master saw his apprentice's work, he clenched his fists, sighted in anguish, and beat the ground with his staff.
"O, pitiful is this thing merciless in all the world."
The master let out a final, long sigh, and hobbled away.

Kunwu pondered his master's word for three days, and did not touch a single blade in that time.
Then, he spent a whole year painstakingly carving an eaglewood sheath.

Kunwu thought that an elegant and opulent scabbard would surely suffice to subdue the wildness and violence of the blade.
But then the prized sword was lost among the common folk. The sharp blade survived, and all that remained of the scabbard was its story.
For the sharp blade seeks only to bathe in the blood of its victims, and no sheath can be made that will curb this desire.

Bane of Fire and Thunder