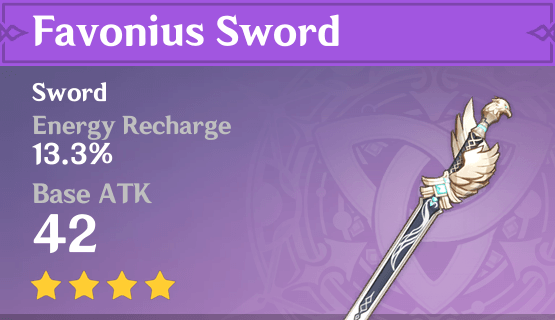 A standard longsword wielded by the Knights of Favonius. It is usually issued after the approval of both the Master of the order and the Church.
The craftsmen in Mondstadt have achieved some results in elemental affinity by studying Mondstadt's Anemo.
This light and agile sword is not only an honor bestowed upon a Knight of Favonius, but aslo the fruit of the hard work and skills of the guardians of Mondstadt.
It can channel elemental power with ease. Its bearer could do well to remember that its sharp blade is intended for defending, not attacking.

The traditional art of Favonius Bladework was originated by the childhood friend and spirtual counterpart of Arundolyn, the Lion of Light, whose name was Rostam, the Wolf Pup.
Legend says he could chop each drop of rain out of the sky, and that the wind from his sowrd dance could split the rose and extinguish the torch.
In this lies the essence of Favonius Bladework: light, swift, and precise in the defense of Mondstadt.

At age of twenty-seven, Rostam received the title of Wolf Pup.
Knights of Favonius tradition dictated that the titles of Lion and Wolf were reserved for those of great leadership potential. Such individuals would one day assume the position of Grand Master, devoting themselves to the leadership of a multitude of knights and the safeguarding of Mondstadt.
But though he fulfilled his duties faithfully, and devoted himself to Mondstadt, Rostam would not live to see that day.

Since Rostam introduced the bladework style, no other practitioner has ever matched his legendary abilitiy.
But his fervor, along with his will to protect Mondstadt, have stayed with the knights throughout the generations.