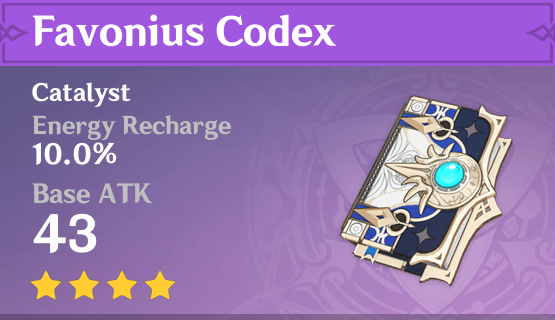 A secret tome that belonged to the scholars of the Knights of Favonius. It holds the collective knowledge of the scholars.
It is inlaid with crystalized elements, which is what makes the Favonius Codex such a rarity.
Not only because the elemental crystals are precious, but also because the Favonius Codex is hand-made.
Only scholars who have mastered the control of the elements can create such elemental crystals.

When the Knights of Favonius was founded, the Dawn Knight Ragnvindr turned the aristocrats' indoor baths into a library. In time, countless contributions from bards, scholars, and travelers turned the library into the largest collection of literature in the northern half of the continent.
After all, songs are whisked away by the wind and wine's pleasure lasts but a fleeting moment. Only that which is committed to the page may sparkle and shine for eternity.

Even so, the scale of the library's collection is now a fraction of what it was at its peak.
For sadly, the library once burned down in the "Great Fire of Fall Equinox" tragedy.

There is a large sturdy door of poplar wood in the library basement.
It is said that the door predates the founding of the library and stood firm against the smoke and flames.
The truth is this door stood there long before the Knights of Favonius was ever founded.
The Knights of Favonious officially states that the restricted section of the library is housed behind the door.
But tales tell of a far more profound secret hidden within.