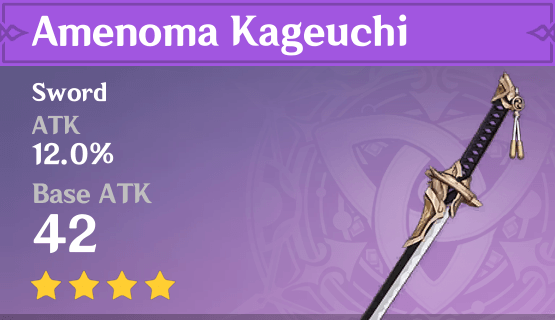 One of the "kageuchi" copies of the famed sword "Hakuen Michimitsu Amenoma."
It was gifted to the Saimon Clan by Douin, the founding patriarch of the Iwakura Clan.
This gift was given in thanks for the care that he received from them when he was living in seclusion in Konda Village.

It is said that Iwakura's secret blade technique, Tengu Sweeper, can only be performed when there is not a single trace of confusion in one's heart.
In the past, the name "Tengu Sweeper" sounded the same as "Tengu Victor," and it was a sword strike that could cut a Tengu soaring in the sky down.
For centuries, the swordsmen of Iwakura, they who inherited the name "In," would use this secret blade to destroy countless evils throughout the Inazuman archipelago.

Legend has it that the Tengu Sweeper was first created in the courtyard of a small shrine where incense no longer burned.
The technique was so powerful that it destroyed the building, and Iwakura Douin's sword was broken in two.
After that, he founded the Iwakura Art with his swordsmanship skills and became the instructor of the Kujou Clan.
He would also have the Amenoma master of that time craft the sword that would be passed down through the "In" line — the "Hakuen Michimitsu Amenoma."

Legends abound concerning the deeds done using that blade. It is said that its edge was so sharp that it might even cut through mortal fate.
As for the overly lengthy name, it is said that Iwakura Douin specified to Amenoma that it be called as such.