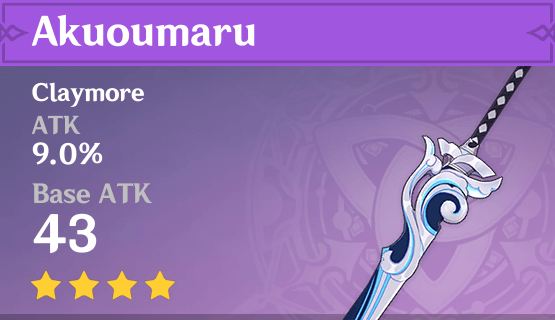 This blade was once used by a mighty general of Watatsumi.
It is said that he only knew as much of swordsmanship as the "Getsumouun" and "Yuushio" styles he taught himself,
And yet by their grace was he never vanquished by any mortal in a duel or on the field of battle.

It is often said that snakes and fish are both cold-blooded. But cold-blooded creatures ever seek the promised land of warmth.
To see his people's dreams fulfilled, Omikami challenged the gathering storm clouds to war.
Amongst the people of Watatsumi bent upon conquest, a young man stood out from the rest.
His fearless valor won him great love in Watatsumi, and they named him Touzannou.
But after many years passed, his kingly name was forgotten, only to be replaced by the epithet by which his foes knew him:
"Akuou," the wicked fangs and claws of the Great Serpent, the savage, demonic invader of Yashiori Island...

The slaughter had hardened the young man into a warrior. But to him,
Only the wish he made before departing, a wish made upon the moon reflected in the waters beside the shrine, was eternal.

"One day, I shall set myself above Mt. Yougou, overlooking the palace of the Lord of Thunder."
"I will have a joyful showdown against the legendary Great Tengu of Yougou upon the roof of Tenshukaku."
"...And then I'll bring that tengu's mask back to Ayame and Mouun as a souvenir!"

At last, the tides washed all their dreams away like towers in the sand.
The tengu's mask, shining like a crimson star, was shattered like seashore gravel amidst the chaotic battle,
Nor would the shrine maiden who shone like moonlight into the young man's soul ever return again,
While the Akuou himself would face the blinding ray of lightning alongside the Great Serpent.