Mask of the Wicked Lieutenant 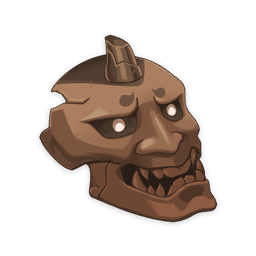 Folktales tell that once upon a time, there lived an oni named Torachiyo. Torachiyo was a highly skilled warrior, such that it was once said the Torachiyo might dance amid a thousand blades, juunihitoe robes becoming shredded like falling violet petals, and yet not receive a single wound. Yet this oni would eventually betray the Shogun and revolt, becoming shorn of an arm and a horn in the battle before fleeing and slaying itself in a fit of furious madness.
Hearsay holds that the stubborn oni often hold fear and distress in their hearts. That they should fantasize about eternity yet fear the moment, and are apt to become swallowed by terror or anger is their just reward. This mask depicts Torachiyo, fangs bared.