Mask of the Kijin 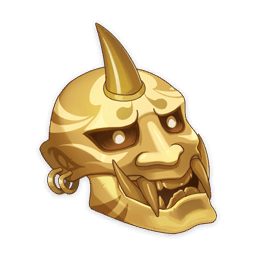 Chiyo, a warrior of the oni tribe with the Electro Mitsudomoe emblem emblazoned on her back, was once swallowed whole by a beast from beyond this world that had a tiger's body and a serpent's tail while holding back the forces of darkness. At last, she tore the creature's innards apart from within, breaking free.
This is the origin of the phrase "Chiyo the Tiger-Bite," and would be changed over many years to "Torachiyo."
But within the belly of the beast, she was stained by a deep sin and saw her comrades ripped to shreds by those blood-red teeth. Steeped in darkness as far as the eye could see, she would eventually draw her sword upon the Almighty Narukami Ogosho. Her sword-arm and one horn would be cloven, and she would flee from the city into the forest like a wounded beast. There, they say that she was taken for some unknown monster and slain by the tengu, or perhaps by the Shiyuumatsu-Ban — or perhaps by a scion of the Iwakura Clan training deep in the mountains, for her features had been twisted by hatred and the agony of her wounds. Or perhaps she even met the oni-masked, sword-bearing doll near the corpse of the giant serpent, and there ended her life's journey.
Few among those who fought against the abyss in those days were spared pitch-dark dreams. Those who slew monsters and then became them were hardly the minority. The border between worlds grows fragile, and corruption of this kind is perhaps not merely monodirectional.