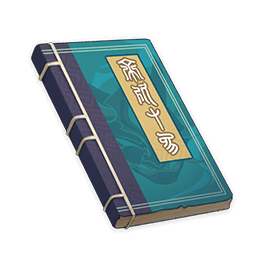 A volume out of the ‘Hidden Wonders and Folklore of Liyue’ collection, which serves as Liyue’s own version of ‘Tour of the Land of Liyue,’ an encyclopedia of folk beliefs and customs by Masudi, a scholar from Sumeru. Due to the archaic nature of the author’s writing style, it was largely dismissed by the public and publishers alike. ‘Yakshas, The Guardian Adepti’ introduces the readers to the various yakshas who fought side-by-side with the Geo Archon.

Liyue knew naught but plague in antiquity. The warmongering archons made it so, for the defeated were trapped under the rocks and became pressed, and the pressed rotted and became soil. Thus were they returned to the cycle of Elements, which doth span both Heaven and Earth, and which knows no end. Embittered arcane souls did rebel and become flesh once more, but their fleshy form was that of daemons. The burning in anger of the daemons gave rise to miasma, which in turn engendered all manner of plagues, daemons and other perverse evils. They starved the earth and boiled the waters, and wrought devastation on the people. Therefore, it is said: The daemonic is the echo of that which was defeated in the divine.

“Liyue suffered many outbreaks of disease in ancient times. Some say this was caused by the chaos of the relentless warring between archons. The defeated were squashed beneath the rocks of the earth, where they decomposed and became soil, and finally re-entered the everlasting elemental cycle. Some of the archons’ souls were filled with bitterness at their fate, and refused to suffer it any longer. Their bitterness materialized and became evil monsters. The monsters’ rage manifested itself in the form of diseases, monster infestations, and all kinds of other strange occurrences. The monsters ravaged the land and turned it into a wilderness, and unleashed all manner of evil upon the rivers and seas. They inflicted untold suffering on the people. Hence, what we call monsters are in fact physical manifestations of the resentment of archons defeated in war.”

Rex Lapis summoned Yakshas unto him to purge the daemons. Illuminated beasts of dreadful appearance and warlike temperament were they, and no brutality did they spare in their duty to defend. Of the many, five were the strongest: Bosacius, Indarias, Bonanus, Menogias, and Alatus. Wherever battle took Rex Lapis, so did they follow, until the plague was purged. The five are known unto mortals as “The Yakshas”.

“The Yakshas” were guardians of Rex Lapis for years without measure, and the evils they vanquished were incalculable. Yet, mighty though they were, beyond the torment that betide all who face war the Yakshas were not, and they became afflicted. Some were given unto their rage, others unto a madness which fear mongered. Many turned to the slaughter of their own, others were bewitched by shadows of the soul. After a millennium did fate present itself unto them, and it was such: three of the five perished, the fourth vanished, and all of the myriad shared the fate of the three or the fourth. The fifth alone prevailed, and the fifth was Alatus.

Alatus is the Golden-Winged King that is also the Great Demons Slayer. None knows whence he came, nor whither he went. Only at springtime, during the offering of lanterns at night, might the people see the glow at Guyun and declare: “Behold, the Guardian Yaksha ends the dominions of daemons!” And only then might they hear the whistling of the marsh reeds, and think it the sound of the flute, but find none in the marsh who play the flute, and thus declare: “Hark, the Yaksha calls to summon his old friends to their homeland.”

Thus, divine endowment doth carry with it that ultimate and unbreakable trial: to lose kin, friend, or ally, to face the impossibility of redemption, to burn in everlasting anger and know no respite. To become the foe of an ancient evil was to abandon hope of both reward and resolution in his endeavors, and his torment was that of the preta, which is to be without satiety after ten thousand fates.

“For this reason, it is said that the wages of being blessed with supernatural power is a destiny of hardship and eventual destruction. For the Yaksha lost all his friends, family, and those he fought alongside. He built up an incalculable karmic debt from the violent deeds his like necessitated, and the consequence was a heart filled with darkness and hatred from which there was no rest. There was no reward to be gained from making an enemy of his own bitterness and hatred from the old days, nor there any escape from the unbearable suffering. The torment ate away at his heart like an insatiable wolf, and an infinite number of lifetimes could have done nothing to reduce it.”