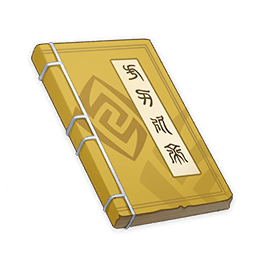 Of all the elements in the land, Geo alone stands fast,
Built on a bedrock of proud tradition, which doth make it last.
For just is the law of Rex Lapis, and ineffable his wisdom -
The cornerstones of justice, which prevails throughout His kingdom.
Slayer of foul demons, no evil would He leave unquenched.

He sought celestial order, to stay the tide of turbulence.
Adepti rallied round him, Yaksha guardians charged ahead,
Frightened by the courageous people the demons fled.
The Lord then fashioned mighty rocks, which into the earth He cast:
The sea monster subdued, peace returned at last!

Though demons lay defeated, their souls did plot revenge.
Down into the watery abyss the demonic souls did descend.
Hatred fueled their rage. Rage, in turn, did blunt their mind,
Their folly sullied the seas, whence the demons multiplied:
A demonic infestation thus engendered by the fallen souls.

Five Yaksha guardians His Majesty task’d with evil to defeat,
To rid the world of poisonous rage with which the demons seethed.
Mountains shook as Yaksha wrath with golden splendor burned,
But though they purged the evil, alas! One alone returned:
Alatus, by whose talons foes were quashed and peace procured.

A peace that harked to days gone by was the peace that now endured.
Peace restored, Adepti back to Jueyunjian ascended.
Duty fulfilled, Yakshas off to unknown corners departed.
May this lowly offering departed souls appease.
And may these words by fire’s light His majesty’s heart please.