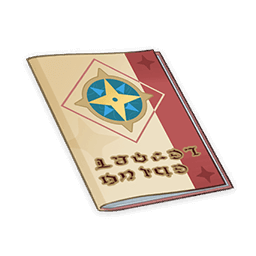 A magazine by the Adventurers’ Guild. Each issue introduces great sceneries across Teyvat. This issue includes a short traveling diary of Alice the Traveler in Liyue.

The northern stretch of the Bishui River turns into a wetland. If you look south beyond the Stone Gate you will see a Silvergrass marsh as far as the eye can see. At the southernmost point of the marsh is an inn sat atop a giant rock. That is the Wangshu Inn, the highest point on the entire marsh. Look south from there and you will see the Guili Plains. You can also make out the Guyun Stone Forest across the sea. Also – there’s a weirdo staying at the inn on the top floor. I don’t think I’ve ever heard him say a single word.

Lunch is a true feast at the Wangshu Inn. The kitchen is equipped with every utensil you could imagine – perfect for getting some practical alchemy experience. On the topic of alchemy practice, I’ve got a few new things to test out in my search for an explosion catalyst. If everything goes smoothly, I’ll spend a few more days here then head to Guili Plains.

In the end, I came to the Guili Plains a few days earlier than I’d originally planned.

Records suggest that prior to the Archon War, this area was a thriving marketplace.

The foxes and wild finches are stunning here, their fur and feathers have a certain glow about them. But I hear that they can be pests, too. Liyue locals complain that they keep eating their fruit offerings to the Geo Archon. I wonder if that gives them a fruity aroma when roasted? Maybe I should go hunting.

They run a strict operation at the checkpoint on the main road, but the guards who work there are friendly people. I made a potion from some local herbs and gave it to one of them for his stutter – it cured him, but it did have some minor side effects. He now can’t help but constantly imitate everyone he comes across. Not just what they say, but the way they say it. It’s uncanny how spot-on his impressions are.

I’m told somewhere amidst the misty peaks of Jueyun Karst lives an adeptus, the exact location hidden somewhere in the ocean of cloud. All the Liyue herb gatherers claim to have seen the realm of the adepti in all its glory revealed before their very eyes in the clouds. Based on personal experience, I can say that over-indulging on certain types of mushrooms can induce visions of a similar nature.

The terrain fascinates me. So many of these Stone Pillars look like they belong deep underground, not here on top of a mountain. There is supposed to be an underground reservoir here. Part of me wonders if all the water was drawn out, perhaps Jueyun Karst would find itself back on the ocean floor where it belongs. My travel companion Zhongli is the sternest person I know, but he seems most entertained by this theory. He won’t stop laughing.

What an odd fellow.

I’ve heard that the fog often rolls in off the sea onto Yaoguang Shoal, and when it’s at its thickest you can barely see your hand at the end of your outstretched arm. Unfortunately, I didn’t make it here in time to see a foggy episode. It’s a bit of a shame.

There are so many lovely shells on the beach. I wonder how many of them have been there since the Archon War? I strung some of them together to make a necklace, but unfortunately that fisherman from the inn sat on it and broke it… Every last shell, brutally crushed beneath his merciless buttocks. None were spared.

Not only that, but because he injured himself on the shard of broken shell, I had to pay his medical bills. A giant sea-snail shell stands on the beach where the Bishui River enters the sea. A kind old lady lives inside. Her family is said to have sailed here on the giant shell, and she spends her time rescuing shipwrecked people who end up drifting near the shore. I think that repurposing the giant shell as a self-propelled boat would make it much easier for her to rescue people from the sea.

But after I lost control of my third prototype seashell-boat and it blew up, the kind old lady decided she was not going to rescue me from the sea anymore.

This is the site where the Geo Archon defeated the sea monster. Some of the great stone Poles that pierce the ocean floor still tower above the surface of the sea, though many snapped long ago. The hexagonal Stone Pillars, formed from a conglomeration of Geo energy, are quite intriguing to look at. Viewed from above, one gets the impression that they were deliberately arranged in their current form to make a specific shape on the ocean surface. Maybe that was the real reason the Geo Archon rained down destruction on the ocean floor with his stone Poles? Maybe it was all just a big joke, albeit in extremely poor taste?

Zhongli from Liyue Harbor seems extremely knowledgeable on Liyue folklore, but I’ve never actually seen him come here. I can see the Wangshu Inn in the distance. I’ll bet that weirdo I met there last time is still staring this way now.

The flow of the ley lines around here are unique in all of Liyue. Much more dynamic, somewhat unstable… It’s as if a great, relentless power stirs somewhere in the depths of the ocean. Perhaps it is the defeated sea monster, still writhing on the ocean floor.