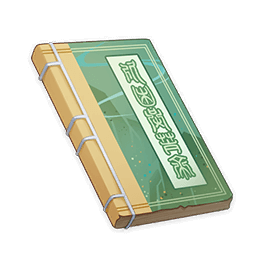 A history book compiled and translated from ancient stone tablets of Liyue by the historian Zichang. It constrains various fragmented historical events.

In the beginning, Rex Lapis descended. He lowered the tides, raised Mt. Tianheng, and calmed the waves. Thereupon, peace was brought to the people. They cut into the mountain and found jade, they bore through the rock and made tunnels, and they piled up stones and built a settlement. It is written that the jade from the bowels of the mountain is that which glows. Hence, they named it “Shanhui Fort” [1]. In that time, all the people of Tianheng derived their livelihood from the mines, all prospered from them, and none knew poverty within a thousand-mile radius.

[1] Better known today by its shorter alternative “Shanhui Rock,” which is often further simplified to “Mountain Rock,” thereby stripping the name of most of its original meaning.

Guizhong, the Lord of Dust was an ally to the Lord of Geo. Around Mt. Tiangheng, he set up Crossbows to keep guard, and they were named “Guizhong Ballista.” He brought his people to the north of Mt. Tianheng and taught them to tend the soil. Agriculture became their livelihood, and all prospered from it. The farming towns stretched for miles, and it was said that one could walk all the way to Stone Gate without ever leaving the network of pathways between the fields. Guizhong said to the Lord of Rock: “My people had left their home and came to this place. Here, they are happy in their abodes and content of their work, thus it is as if they have returned home. Hence, what better name to call this place than ‘the Plains of Returning and Departing?’” The Lord of Rock praised the Lord of Dust for his work and thereafter the area was named in the tongue of Liyue “Guili Plains.” [2]

[2] It later came to pass that the archons each strove for dominance, which brought catastrophe upon the land. Though the adepti fought to protect the Guili Plains, they could not stop the tide of war, which ravaged the plains and took the life of its king, Guizhong. Thereupon, the Lord of Rock Rex Lapis took his people south of Mt. Tianheng. Thus the people departed from the Guili Plains for good, never to return, and it was left to become a wilderness.

Rex Lapis pacified the archons, adepti and yakshas were content in their positions, and Liyue re-entered an era of peace. Before this time, the archons waged war for centuries on end, and not one field was left unravaged. The people of Liyu turned to commerce and artisanship for their livelihood, and prospered once more. Those who prospered above the rest joined together, calling themselves the Qixing. Thus was formed the framework around which Liyue Harbor developed. Under the jurisdiction of the Qixing were all the known trades, no business of Liyue took place inside or outside the nation that was not known unto them. The Millelith also took orders from the Qizing, supporting the masses at home and suppressing the monsters at the border. Thus became the nature of Liyue’s governance under Rex Lapis.