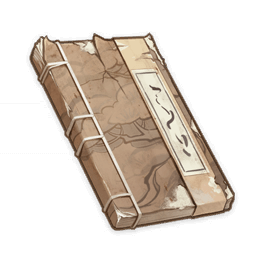 A diary left behind by someone in the wilderness that tells of the owner’s unfortunate events encountered at Guili Plains.

Out of the frying pan, into the fire…

I finally made it out of that Hilichurl camp alive, only to end up nearly being killed by a Ruin Guard! I’d figured it was probably out of action given the way it was sat there completely motionless in the torrential rain. But then a bolt of lightning struck it right on the head… There was some whirring and grinding, and suddenly it was back to life.

I was powerless to defend myself against it. He lifted me up like a baby bird and tossed me from the top of the cliff. Luckily, amidst my frantic scrambling, I managed to duck into a cave at the foot of the cliff. It was out of his line of sight, so he gave up trying to find me. If not for that cave, he’d have ripped me to shreds, thrown me to the ground, and then stomped me into… I don’t even know what you’d call it by that point!

Surely it must be well away from here by now… Even so, I can still hear the droning noise it made, like a swarm of bees buzzing around inside my head. I think I must have broken my arm, because it hurts when I put any pressure on it. I think – I hope – that I will be able to manage, though. In any case, at my age I need to grin and bear it. I mean, what would Dongdong and his mother think of me if I didn’t?