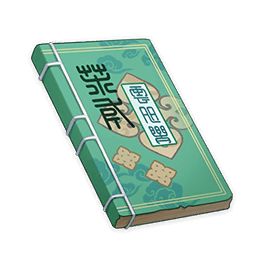 A collection of folk stories, myths, and legends from Liyue.
It’s quite a page-turner. This segment is on the legends of stone beasts.

Stone statues appear all across the vast land of Liyue. Most were built by locals who prayed to them for favorable weather and peace steadfast as the mountains. But it is claimed that some have a much more ancient history.

One story regarding the animal statues in particular is popular among the fisherman of the Bishui River, the Silvergrass harvesters of Dihua Marsh, and the old mining crowd. They say that in some corners of the land, ancient stone beasts wake at night in the cool of the fall and look around at a world that has slowly become alien to them. Hearing the sounds of frogs and insects greeting them, they respond with deep, soulful cries from their petrified throats. Then they roam around Liyue, inspecting once more the land they used to protect.

To my knowledge, no-one has ever witnessed a stone beast in motion firsthand. However, local residents who know the territory extremely well have long observed and accepted the phenomenon that the animal statues can change location and posture overnight. Meanwhile, light-sleeping campers often report hearing a sound in the middle of the night that is like flowing water, only much deeper in tone.

As for where these stone beasts originally come from, the elders of Qingce Village say they are the illuminated beasts who once fought alongside Rex Lapis in the Archon War. After the war ended, the tide subsided and peace was restored. The illuminated beasts were no longer required to serve as defenders of the common people, and one by one they retreated to more secluded parts of the country. There they lived free from concern for mortal affairs. But some illuminated beasts remembered with fondness the glorious days when they served under Rex Lapis, and they pined for the years they protected Liyue. Though they were not of the mortal realm, nor were they immortal: For them, too, life would one day come to an end. Thus, they beseeched Rex Lapis to turn their ephemeral flesh bodies into everlasting stone. The merciful Geo Archon granted their request and made them as such.