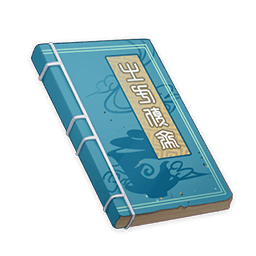 A poetry collection by the Mystic of Mt. Ping. The quality of the poems is all over the place, but it has long been a reference book for young poets or poet-wannabes in Liyue.

I watch two village men play chess, they play it terribly. For one of them is lacking skill - the other, strategy.

A muddled mess of bungled chess upon the board ensues. I claim to watch in ignorance… in fact, I’m quite amused!

These curious rock formations! All that grows here grows awry:

From Cor Lapis, to shining jade, to silken shrubs galore, the sights exceed what many aged simpletons can endure.

The more that one seeks it, the more it seems true, for the birds and beasts here hail from there too.

The rich expel it from their homes, but in mine, I boast that it freely roams.

A sound assails my ears, ‘tis waves that crush against the cliff.

A thoughtless neighbor is that wind god, who tears the skies asunder. For he sends things flying everywhere, and disturbs the people’s slumber.

Spring blooms in Qingce, floral fragrance fills the air. It’s times like this I really wish my mum and dad were there.

Silvergrass softly rustles in the cool autumnal breeze. I harvest it to weave new clothes before the winter freeze.

Rex Lapis erected this mountain and built that bay by the sea.

These stratified cliffs are majestic, and those streets entertain endlessly.

Oh, how cool is the shade of the trees when summer’s heat sets in!

I lie my body on a bed of leaves, in a blanket of breeze ensconced.

Alas, mosquitoes show no mercy to my tender skin! In hast, I flee from persecution and head back home at once.

I took an after-dinner stroll at evening by the sea. I stroked my beard in thought and gazed out at the galaxy:

The stars across the sky connect to form a canopy, holding back the moon lest it fall into the sea.

I stopped by Feiyun Slope to view the merchants’ wares: precious stones of every kind - from expensive to astronomical.

But why waste Mora here on rocks, and have none left to spare?

I’d rather spend at Yujing Terrace on all things gastronomical.