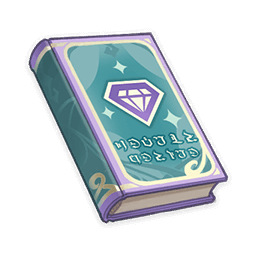 A collection of fantasy stories centered around a mysterious antique shop. It’s widely popular around Teyvat.

The shopkeeper, who had fox-like eyes with slender lines for pupils, opened the glass double doors to let in the bright moonlight, which seemed to sweep up the stardust from across the night sky and sprinkle it down upon the counter.

Everything, from the ostentatious flowers, the dust-covered harpastum, and the old books rendered illegible by years of erosion, to the now-stringless old longbow, appeared as the opulent halls of the ruling aristocrats might have done in times of old - covered in a shiny silver coating, though this was a silver that came from the cold light of the night sky.

“Hey. Business any good these days?”

This audacious alternative to the courteous greeting most people would opt for in the circumstances came from somewhere deep in the back of the shop.

The shopkeeper turned around. A familiar customer was sat nonchalantly on her armchair in the part of the shop that the moonlight did not reach.

“Business is fine. But these days, it would appear, I need to watch out for burglars.”

The shopkeeper responded with a slight smile.

“That’s it? You’re going to turn away your oldest customer, just like that?”

The customer let out a sigh, “There’s nothing in your shop that’s worth me spending money on anyway. I mean, if I really had to pick something…”

“What do you mean? You think I’m just here to offload some loot again?”

“Why, of course not. When have I ever heard you use the word “loot” before?”

“On the contrary… all the “exchanged goods,” “free gifts,” “philanthropic donations,” “bestowals” and so on that you have so generously given over the years… why, they must make you the most charitably inclined burglar to roam the streets, no?”

“Well, that’s not why I’m here this time. This time I am here to ask for something from you… the wine. That special wine you’ve got that helps you forget about the one you long for.”

Though a burglar by trade, this customer was nevertheless valiant at heart. His words lacked courtesy, but the smile on his face was entirely earnest.

“I’m terribly sorry. Somebody has already bought it.”

He looked, and somehow, she was now holding in her hand the wine flash that he had discreetly slipped into his breast pocket earlier.

“Each item in this store is spoken for. The particular one has already been bought by a customer who will turn up at some point in the future.”

“It seems your sleight of hand is superior to my own. What a disgrace I am…”

The burglar of valor said with a pained smile.

“I discovered recently that the feeling of longing for someone is heavier to carry than gold. In my line of work I am forever leaping between rooftops and running along rafters. I need to cut out whatever… unnecessary weight I can.”

“...I wonder if the girl with the sapphire-blue eyes feels the same weight that I feel?”

Suddenly, the shopkeeper was startled by the jingle of the door bell.

The customer who had just arrived was a blue-eyed sorceress with a Pole in her hand and a tall, slender figure to match. The marks on her face bore witness to her persecution by the aristocrats. Ignoring the piles of random objects strewn around the store, she marched straight to the counter like a sword lunging toward its opponent’s heart.

“Welcome to the store. Do you see anything that takes you fancy?”

“I have an item I wish to exchange.”

Her tone sounded cold but fragile, like thin ice in the moment that it shatters. As the sorceress spoke, she placed a giant blue crystal onto the counter.

“A burglar pried this from an aristocrat’s silver goblet. He gave it to me as a gift, and then I was punished by my master for it.”

“But that was many years ago. I had thought that with the passage of time my anger would be quenched and my desire to see him again would fade away…”

“Very well. What sum of Mora do you ask for in return?”

The sorceress gestured toward the tableware cabinet, in which stood an aristocrat’s silver goblet with its gemstone missing. The fox-eyed shopkeeper turned the crustal in her hand, flooding the room with the brilliant blue light that reflected off its surface.

“I see. Well, provided that this is what you really want…”

When a person encounters a setback, the worry that everything shall come to a fruitless conclusion appears. The advent of fear causes cracks to appear in the mind.

Death follows easily in the footsteps of fear, like a damp cold that, to the unprepared, pierces to the bone.

For many, it is only in the moment that death is upon them that it dawns on them that their weakness has now been targeted with fatal consequences - and that at some point, therefore, that weakness must have been exposed.

Lifting the blue crystal up into the moonlight, the shopkeeper gazed at it intently with her fox-like eyes with slender lines for pupils. She watched with delight as the crest of the ruling family came into view, faded out, and came back into view once more. Legends claim that peering into a pure gemstone at a specific time can reveal the past, the future, and even someone’s true nature. Just as legends claim that somewhere in the world, there is a field of dandelions as vast as the sea. Or that once there were three bright moons in the night sky named Aria, Sonnet and Canon, sisters who were parted by death in a great catastrophe. Or that there was once a witch who could see death before it took place, but in the end herself died from a broken heart, as he who had stolen it from her waited in distant lands longing to see her again.

One thing she knew for certain was that even if she were to abandon these objects, the legends attached to them would not disappear, and the way the stories ended could not be undone. In which case, it seemed to make sense to collect all the legends and stories she could in her shop.