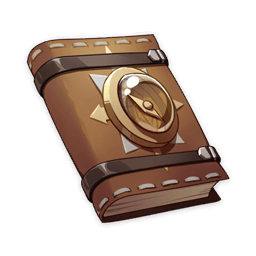 A diary left behind by the famed adventurer, Roald, by chance.
The pages are damp and seem to have been soaked in water.

We skirted past a few small islands occupied by Hilichurls, managing to steer clear of their line of sight, and made it to Guyun Stone Forest successfully. Six giant Stone Pillars kept the sun out of my eyes as I went ashore, and it was remarkably cool in their shade. The crabs on the beach were big and meaty. Maybe it’s because the area has been nourished by the remains of a magical beast for millenia? Anyway, they taste great roasted.

The sheer beauty of this place makes it hard to imagine that it was once the site of a bloody battle between the Geo Archon and the sea monster. Suffice to say the blood once shed here has long since vanished into the sea without a trace. I suppose that everything pales into insignificance when faced with the scale of the sea. Whether it’s a single drop of an ordinary person’s blood or rivers of blood shed collectively by the heroes of the past, the relentless flowing of the winds and waves are destined to wash every last trace of it away. In the end, everything will be just as it has always been, since time immemorial.

Legend has it that the Geo Archon once carved a giant polearm out of the rocky land. He plunged it deep into the ocean, riding it straight through the body of the demon that wrought chaos upon his domain. Over the years, the wind gradually eroded the stone polearm into the form we see today.

Later, I’ll return to the mainland to camp out for the night. From where I am, I can see the ships leaving the harbor in the distance. As I write, the Crux is setting sail once more, embarking on its next grand voyage. I wonder what mission the Qixing Commerce Guild has entrusted to the legendary Captain Beidou this time?

I had the most awful night’s sleep last night. I dreamt I was somewhere pitch-black and damp. Suddenly, I was a sea monster, and my impaled body was being driven into the ocean floor by the Geo Archon’s polearm. I writhed around and clutched at the giant polearm made of rock, trying desperately to free myself, but it was wedged firmly in place. Each moment I made filled me with agony, and with rage…

Note to self: Guyun Stone Forest is not a good place to spend the night! I woke early, so I lit the campfire and I’ll move out once the sky’s bright. My next stop is Liyue Harbor: I just need to be somewhere that I can get my clothes washed, beard trimmed, that sort of thing. Once I’ve sorted myself out, I’m making another trip to Jueyun Karst. I didn’t make any progress on finding the adepti last time. This time, I think I’ll try my luck at Qingyun Peak.

Another note to self: Do not lose my diary again!