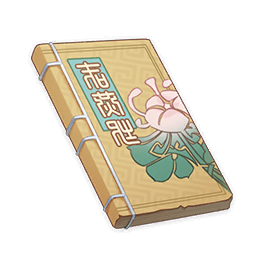 A book on the cultures and customs of Liyue originally compiled by Fadhlan, a scholar from Sumeru residing in Liyue. It was then edited by many local scholars and published. It is one of the bestsellers in Liyue.

It is customary at weddings in Liyue for the bride to cast a flower ball towards the oncoming crowd of guests. It is said that the one fortunate enough to catch it will enjoy a year of good luck: business owners will see their wealth increase, the poor will see their fortunes turn around, the single will encounter their fated partners, and the married will see their shared life blossom with mutual love and appreciation, never again to descend into petty squabbles over life’s daily vexations.

While some brides use a real flower ball, many alternatives exist depending on the family’s wealth. The rich tend to use woven balls with silk from Silk Flower, while the poor fashion theirs from colored paper or cloth. But the custom itself is observed in the same fashion at all of Liyue’s weddings, even though the fortunes of individual families may differ.

Some say the Liyue custom was originally adopted from the Ludi Harpastum festival celebrated in the neighboring Wind Kingdom of Mondstadt. Others say it dates back to before the Archon War, when the Salt God roamed free in Liyue. She once stood shoulder to shoulder with the many gods of Liyue, but her extraordinary gentle nature saw her quickly ousted in the hubris of the Archon War, before being ruthlessly murdered by one of her own followers.

Her remains are likely to be found somewhere in the ruins of the area known as “Sal Terrae”. According to a legend that time has unfortunately stripped of all useful detail, she once handed out bunches of flowers to her people as a blessing to them. Or at least, if not a blessing, then a small gesture of comfort to stave off the bitterness of wartime existence. In any case, following her return to the elements, it is conceivable that her followers spread across Liyue, took this custom with them, and taught it to the locals. The people of Liyue being a competitive and fun-loving folk, they may then have adapted it and embellished upon it to suit their own preferences.

Despite being a benign and joyful celebration at heart, security logs from the Millelith indicate that the throwing of flower balls is responsible for a significant number of injuries every year. In fact, the number of cases is more or less the same as those caused by monster attacks.