Prospect of the Brave 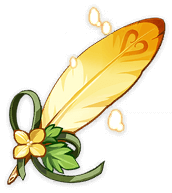 To comfort his crybaby of a companion, the young hero gave his friend a bird's feather.
This was proof of their shared adventure, of the treasure they
found together, and was meant to embolden his comrade.

Much later, one of them was named a "lion,"
And became a crownless king at the head of many knights.
The other became a "wolf,"
Supporting his friend from the shadows, and running affairs of state.

In those turbulent times, the two defended their home and each
other like sword and dagger.
But this was a story from long ago.
So many were lost during the cataclysm.