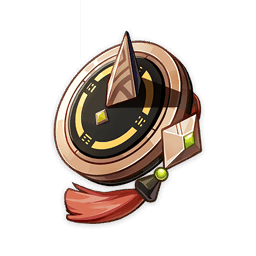 A hardy timepiece powered by sunlight and moonlight, capable of capturing rays of light even on the darkest of days.
When Liyue was threatened by a pitch-black malice, this time-dial helped the soldiers to remember the warmth of the sun

In the course of fighting side-by-side with the yaksha, these mortal soldiers could not escape being contaminated by karma, or harmed during the slaughtering.
To avoid being consumed by the darkness of constant killing, the Millelith soldiers used this timepiece to silently mark the passage of time during each battle.
They fixed a unified marching pace and schedule so that one squadron of mortal soldiers would take the battlefield as the one before them retreated.
This cycle of advance and retreat continued all the way to the depths of the Chasm, where yaksha and valiant soldiers both fell.

100 years later, this timepiece was unearthed by a miner. Its bronze surface sparkled in the bright starlight.
Urban legends tell of a collector of curios wearing black robes, who roamed the market streets one day, buying up Orichalceous Time-Dials and paying a generous sum for each one.
Some sellers queried him, curious to know what his reasons were, but he deftly deflected all their questions with an array of excuses and other verbal tricks.
As for what this individual's true motive was, perhaps only the unyielding forward march of time can finally deliver a satisfying explanation.