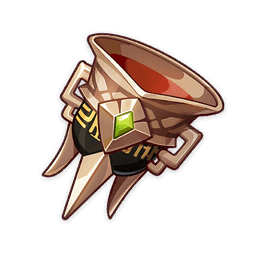 When the Millelith was first founded, Liyue was still a savage and dangerous place.
The elders of towns, villages, and tribes would pledge oaths of allegiance with a golden cup.
As a show of loyalty to Rex Lapis and duty to their countrymen,
They selected valiant soldiers from all regions. These soldiers became known as the Millelith.

They would go on to take up arms with a yaksha in battle, fighting from the rearguard. They too drank from that golden cup.
It was a final toast to the benevolent and majestic Lord of Geo. With their gaze fixed ahead of them, they stormed into the abyss.
Hundreds of years later, a conceited adventurer retrieved the cup from the depths of The Chasm and washed away the imperfections.
Miraculously, the cup remained whole and untarnished by the passage of time. The pitch-dark of that subterranean realm had failed to remove its radiance.

Yet more centuries passed. Eventually, the people of Liyue would tell tales of an era of catastrophe and a nameless yaksha,
Tales of how heroes from disparate heritages and different lands united under a single banner against the Abyss...
Inevitably, the tale would touch upon the cup, and how the blood of those that went before remained clear and spotless as the day it was spilled.