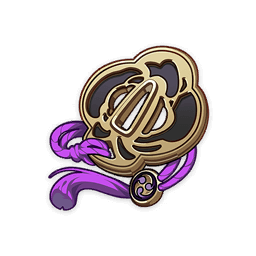 Mother had bared her fangs against the Shogun, who had been kind to her and who had given her a treasured sword.
In the end, the only thing that was sent back to the Mikoshi Clan was the tsuba of that blade which she had loved so dearly.

Mother's long-cherished wish was to overcome the destiny of life and death with her boiling passion.
She would make such contributions as to make an eternal name for the ever-thinning blood of the war-oni.
If she was engulfed by the pitch-black tiger-beast of sin itself, then she would tear it apart from the inside.

She would've proved her valor resoundingly under the Electro Mitsudomoe banner,
And she thought she could wash her bloodstained juunihitoe battle-garb clean.
But it was stained black in the end, together with her fiercely beating heart...

From then on, her eldest son, who should have inherited the family fortune, lived in seclusion in a village outside the city,
With naught but the mountain and wood as his friends — that is, until he met that girl...

"What a pain. Well, if you wish to abandon your past, allow me to give you a new name."
After hearing about his past, the girl who possessed jet black wings sneered disdainfully.
"Well, you shall be called Iwakura. 'The seat of rock.' A name that human words cannot harm."
"Come on, mortal in whose veins runs the blood of the oni, be glad. Smile a little!"
"You should know that names given by us Yougu [sic] Tengu are blessed with divine powers."
"Besides, the name 'rock' suits you — it certainly suits your mind and your muscles, that's for sure."

"Well then, when the cherry blossoms fall next year, let's have a duel here, 'Iwakura.'"
"Child of the oni, hone your swordsmanship and become a foe whom the Yougou Tengu would not be ashamed to cross swords with."
"Ah, yes! If you manage to touch me, you'll get to call your secret blade 'Tengu Victor'!"
"After all, if you get to that point, you'll have a sword that'll let you 'triumph over the tengu.'"