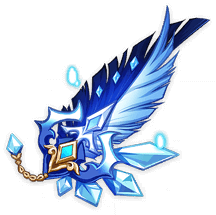 A feather of a bird of prey that did not originally belong in the winter chill. It is cold to the touch.
And when you do touch it, it is as if you can hear cries in the snowstorm, unbowed but bereft of hope.

With no nest or shelter, the bird faced the storms proudly.
This feather has been assailed with coalescing ice and snow, leaving it coated in pearls of frost.

It once came from a falcon in flight and was plucked violently from that bird by the frigid winds.
It drifted a while in the air before the weight of the frost dragged it back down to the ground.

“I believe that the lively birds will follow you, and return to the gardens of the summer palace, now green once more.”
“Those who have been chased away by the chilling tide, and those children who have lost their homes, they will return with you to the home of their dreams.”

The hero, bearing such great burdens on his back, halted in the whipping snow, struggling to discern the color of that feather.
Sealed in ice, that feather’s color faded every step of the way — just like the hero’s task.