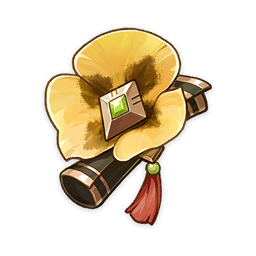 In an age when solemn songs were sung from the clifftops, a meteorite once fell into the Chasm.
Out of the depths of the boundless night sky above, the iron meteorite plummeted to the ground, turning the earth to powdered glaze on impact.

Though human life is fleeting, Rex Lapis personally ordered the Millelith to rush to the defense of the mines.
As the Abyss flooded forth, the Millelith escorted countless civilians to safety.
Miners tell tales of a small number of troops from the rearguard, who remained in the Chasm
Together with the nameless yaksha, they fought courageously until they, too, made the ultimate sacrifice among the jagged rocks.

In time, the names of both mortals and adepti alike were forgotten. In time, even the mountains and rivers change form.
Yet there will never come a time when their honorable deeds shall be forgotten. Like this gold-leafed flower, they will shine on forever.
500 years on, the harbor city remains as steadfastly peaceful today as the day the disaster was quelled.
And still, the troops wear this golden flower with pride, in honor of the sacrifice made by their forebears.