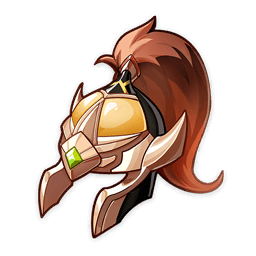 The commander who fought together with the nameless yaksha fell in the line of duty,
As did the handful of his compatriots who fought alongside him.
To ensure that the afflicted civilians could safely escape, and to maintain their honor in the eyes of the Lord of Geo,
The helmet-clad troops of the front line took the lead, pointing their spears towards the Abyss and charging into battle.

Disaster arrived in the land of glaze, and a horde of ancient foes came surging forth.
At the order of Rex Lapis, the yaksha fought a bloody battle against the warped creations of the Abyss.
The fight went on until the last drop of blood had soaked into the battlefield and all that was impure had been cleansed.
As the tide of the Abyss receded, the glaze sands shone gloriously once more,

But when the gloom that had filled the skies above The Chasm had finally dissipated, the yaksha disappeared without a trace.
As for the general and his men who left their helmets on the battlefield, they rest there in peace forevermore.