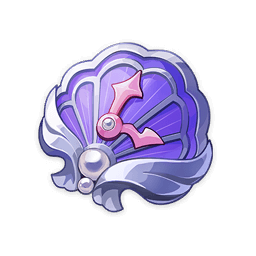 Time seems to pass exceedingly slowly in the silent, florescent ocean depths.
Even the bright seashells might grow forgetful as the years lenghten.

The people of Watatsumi once came forth from the darkness, and thus, bade farewell to the long dreams of the deep.
They escaped the prying gaze of the Dragonheir in the dark, walking the glimmering coral stair into the realm of daylight.
It is said that at the time, the ocean people would take a single seashell and remembrance for their clan.
And as for those who had lost theirs, they would be welcomed into a new family.

In the ancient tongue, these pure shells would become known as the Parcels of Reunion.
Two parties who embrace shall not again be parted by an outside force, though this enjoining is not itself eternal.
These seashelss, therefore, were a farewell to life beneath the waves, and the beginning of a new life under the sun.