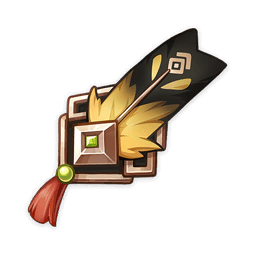 As a mark of military service, the Millelith use the feathers of high-altitude birds of prey to adorn their uniforms.
These tail feathers are only worn on ceremonial occasions. They boost the morale of the citizenry and fill visiting outlanders with a sense of awe.

It is said that in its inception, this ceremonial custom was inspired by the nameless yaksha.
In the heat of battle, when the yaksha was engaged in fierce combat with the Abyss, some of its plumage was stripped away. The feathers that fell to the ground were seen as a symbol of hope.
In the end, the brave yaksha and fearless citizenry would sink into an exhausted slumber in the dark lair of the enemy.
Rex Lapis was moved by their sacrifice and observed a prolonged vow of silence among the low murmuring of the mountain stone.
The people claim that the nameless yaksha that defended The Chasm was not, in fact, under the command of Rex Lapis.
Instead, they believe that it was an act of redemption from a longstanding sin... a price paid for cowardice and dereliction of duty.

Whatever the truth of the matter, the yaksha that had once soared through celestial heights had now returned to a free existence amongst the clouds.
As for the soldiers, trapped in eternal slumber in the depths of The Chasm... their legend continues to evolve with the flow of time.