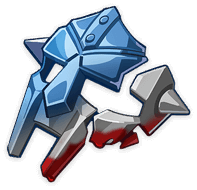 Bathed in the flames that devoured his homeland, the berserker's face was no longer recognizable.
The iron mask became joined with his flesh, permanently branding his face with a heartless countenance.
Then, in a fierce battle, his horrifying mask was split into two by his opponent.
The cracks of the mask tore apart the flesh that had long stuck to it.
But neither pain nor blood could stop the berserker's unfaltering footsteps.
The berserker kept roaring until the fresh blood covered the black clots hardened on his face.