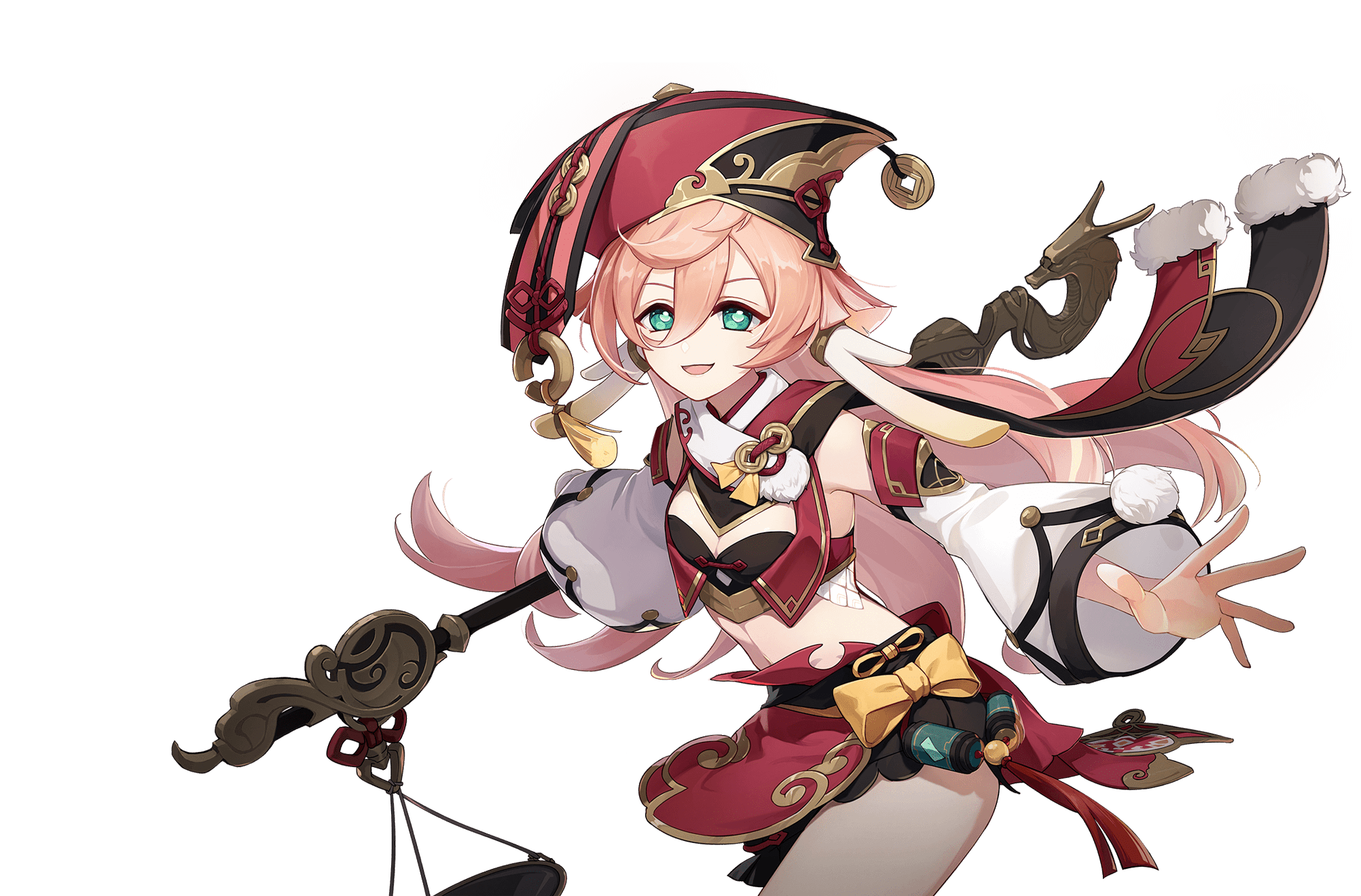 A half-illuminated beast and highly-skilled legal adviser.
She combines adherence to the legal codices and reasonable flexibility to find the perfect balance in her work. She devotes herself to protecting the fairness of contracts in Liyue with her identity as a legal adviser and her unique experience and methods.

A well-known legal adviser active in Liyue Harbor. A brilliant young lady in whose veins runs the mixed blood of an illuminated beast.

Liyue is a port that prizes contracts and trade, and it is a place where wealth accumulates.

Merchants from various nations are active here, which has contributed to Liyue's abundance, but has also brought up many disagreements. The Tianquan, Ningguang, has written a very comprehensive compendium of laws to deal with this, but not everyone has the patience to study them.

Thus was born the role of the legal adviser in Liyue society. Highly familiar with Liyue's laws, they help those in need to navigate any contradictions, earning recompense for their efforts.

Yanfei is the premier legal adviser in Liyue Harbor.

She is always able to obtain the most benefits for her clients, insofar as the law will allow. Some even call her "the law that walks."

But in truth, what Yanfei — one of the few half-illuminated-beasts who have yet to sign a contract with Rex Lapis — really wants to do is live a free and happy life.

As for the copy of "The General Law of Liyue" that she carries around on her person, Yanfei has this to say:

"If you don't wish to be bound by the rules, you have to first understand them all."

As the most sought-after legal adviser in Liyue Harbor, Yanfei's rates are also top-of-the-line. Even so, she never lacks for people coming to seek appointments. After all, merchants are not stingy about mediation fees, but are very picky indeed about the mediator. "Money is no object — we must have Yanfei come and settle this matter for us." Many rate Yanfei in this fashion, not only for her quick-thinking or her masterful oratory, but also because she very greatly emphasizes the cornerstone of the law — "fairness." Her mediations often end in win-win situations, and even merchants with daggers drawn will temporarily set their prejudices aside. Though she is unbound by a contract, Yanfei has made her own contribution to the peace and prosperity of Liyue.

As a legal adviser, Yanfei does have her fair share of weaknesses. An example is the mediation of civil disputes that involve emotions and relationships. Divorces, inheritances, custody disputes, senior care, severances... The list continues. It is said that upright officials are hapless in household affairs, and so it also is with Yanfei, who grew up surrounded by love — these matters fall right into her blind corner. Sometimes, she will find that both sides have reason on their side, and other times she will find them to both be unreasonable. Child custody disputes are the absolute worst, as no matter how she settles them, the settlement will have a great psychological impact on the innocent children. Even if Yanfei chooses to soldier on, she will only tire herself out. "Hopefully, everyone can meet the right person and be spared this particular grief."

As a result of her greatly tolerant nature, Yanfei has a wide variety of personal relationships throughout Liyue. There is no need to worry about rubbing a sore spot, and you'll be able to get along with her whether you're an avid conversationalist or not. Of course, this is true as long as you don't attempt to debate with her or start a conversation about the legal profession... Yanfei in work mode is a completely different beast to deal with. Additionally, Yanfei has cultivated the habit of being overly rigorous from her long years of studying the law. When chatting, Yanfei will vigorously eliminate any ambiguity or loopholes present in the discourse and can seem like a bit of a chatterbox. When she realizes this, Yanfei is wont to knock herself on the head with a book in irritation. However, so long as she constantly bathes in a sea of legal literature, this habit will probably be quite hard to break.

When investigating the law, Yanfei's habit is to look past the cold letters of the law to perceive their point of origin. As such, she is also something of a master of "reading comprehension" in her relationships. Once, the Traveler met Yanfei by chance and said, "Huh. Didn't expect to see you here." This should have been a line that one might hear just about anywhere, but it wound up holding a completely different meaning for Yanfei. "Didn't expect to meet you here" implied that the Traveler had at least thought about a scenario in which they would meet. Then why the use of "didn't expect"? One could only postulate that the Traveler had some expectation of where she might appear, and that her current location was not such a place. But whence came the expectation? Could it be that the Traveler had always been paying attention to her in secret? "Does this mean that the Traveler...?" Yanfei tossed and turned in bed that night, unable to sleep.

Yanfei's most prized possession is the steelyard balance that her father gave her.

It is said that this balance was a treasure given by Rex Lapis that can be used to measure the value of all things. For convenience, Yanfei tends to use Mora to balance the scales, which is to say that she uses Mora to evaluate objects.

The prices of many objects have slowly changed over the years, but weighing an object with this balance only gives its value at the time Mora was created, leaving the rest to Yanfei to exercise her own wisdom and judgment.

Across the measurements of countless objects, Yanfei is able to see the changes in Liyue. Some objects that were once common have become vanishingly rare, and some exotic objects of the past have been rendered pedestrian today.

This steelyard balance reminds her that many things cannot be valued by the standards of the world.

Yanfei once tried to weigh the value of a Vision, but no matter how much Mora she added, the scales would not be balanced.

In frustration, she placed on the scale the box at her waist, which contained her heavy, handwritten legal notations. Only then did the weights at last even out.

This is the most special of the many legal treatises that Yanfei collects.

As opposed to the codices that grow heavier and more complicated with time, this book is unbelievably light and thin.

After opening it and getting past the prologue, one will find naught but the most basic few principles of the law inscribed.

As Yanfei sees it, this is the final form of the law. In the far future, the law will have entered into the people's hearts. All people will be amiable, modest, and live happily in this world. The halls of judgment will lie empty and the mountains of legalese shall be caked in years of dust.

Though this may sound like something very far off, for someone like Yanfei, in whom flows the blood of an illuminated beast, living till that day is hardly a great accomplishment.

After encountering one of Xinyan's performances by chance, Yanfei was quite taken by this new wave of performance art.

That said, learning an instrument from scratch proved to be a bit difficult, so after consulting a great many resources, Yanfei came to what she considered to be a decent backup plan.

If such a day were to arrive, she would just become a rapper.

For someone who can recite tens of thousands of words' worth of Liyue law from front to back within an hour, speed at least should be no challenge.

Normal Attack
Shoots fireballs hat deal up to three counts of Pyro DMG.
When Yanfei's Normal Attacks hit enemies, they will grant her a single Scarlet Seal. Yanfei may possess a maximum of 3 Scarlet Seals, and each time this effect is triggered, the duration of currently-possessed Scarlet Seals will refresh.
Each Scarlet Seal will decrease Yanfei's Stamina consumption and will disappear when she leaves the field.

Plunging Attack
Gathering the power of Pyro, Yanfei plunges towards the ground from mid-air, damaging all opponents in her path. Deals AoE Pyro DMG upon impact with the ground.

Apart from their legal uses, Yanfei's seals also come with her customized additional terms and conditions. Well, it's not as if the Ministry of Civil Affairs can change the laws of nature.

Triggers a spray of intense flames that rush at nearby opponents, dealing AoE Pyro DMG, granting Yanfei the maximum number of Scarlet Seals and applying Brilliance to her.

Brilliance
Has the following effects:

The effects of Brilliance will end if Yanfei leaves the field or falls in battle.

"Here the full terms for this matter of life and death — by which I mean my life and your death!"

When Yanfei consumes a Scarlet Seal by using a Charged Attack, each Scarlet Seal will increase Yanfei's Pyro DMG Bonus by 5% for 6s. When this effect is triggered again while its current duration lasts, it will dispel the previous effect.

When Yanfei's Charged Attacks deal CRIT Hits, she will deal an additional instance of AoE Pyro DMG equal to 80% of her ATK. This DMG counts as Charged Attack DMG.

Displays the location of nearby resources unique to Liyue on the mini-map.

The Law Knows No Kindness

When Yanfei uses her Charged Attack, each existing Scarlet Seal additionally reduces the stamina cost of this Charged Attack by 10% and increases resistance against interruption during its release.

Increases the Level of Signed Edict by 3.
Maximum upgrade level is 15.

When Done Deal is used:
Creates a shield that absorbs up to 75% of Yanfei's Max HP for 15s.
This shield absorbs Pyro DMG 250% more effectively.

Increases the Level of Done Deal by 3.
Maximum upgrade level is 15.

Increases the maximum number of Scarlet Seals by 1.