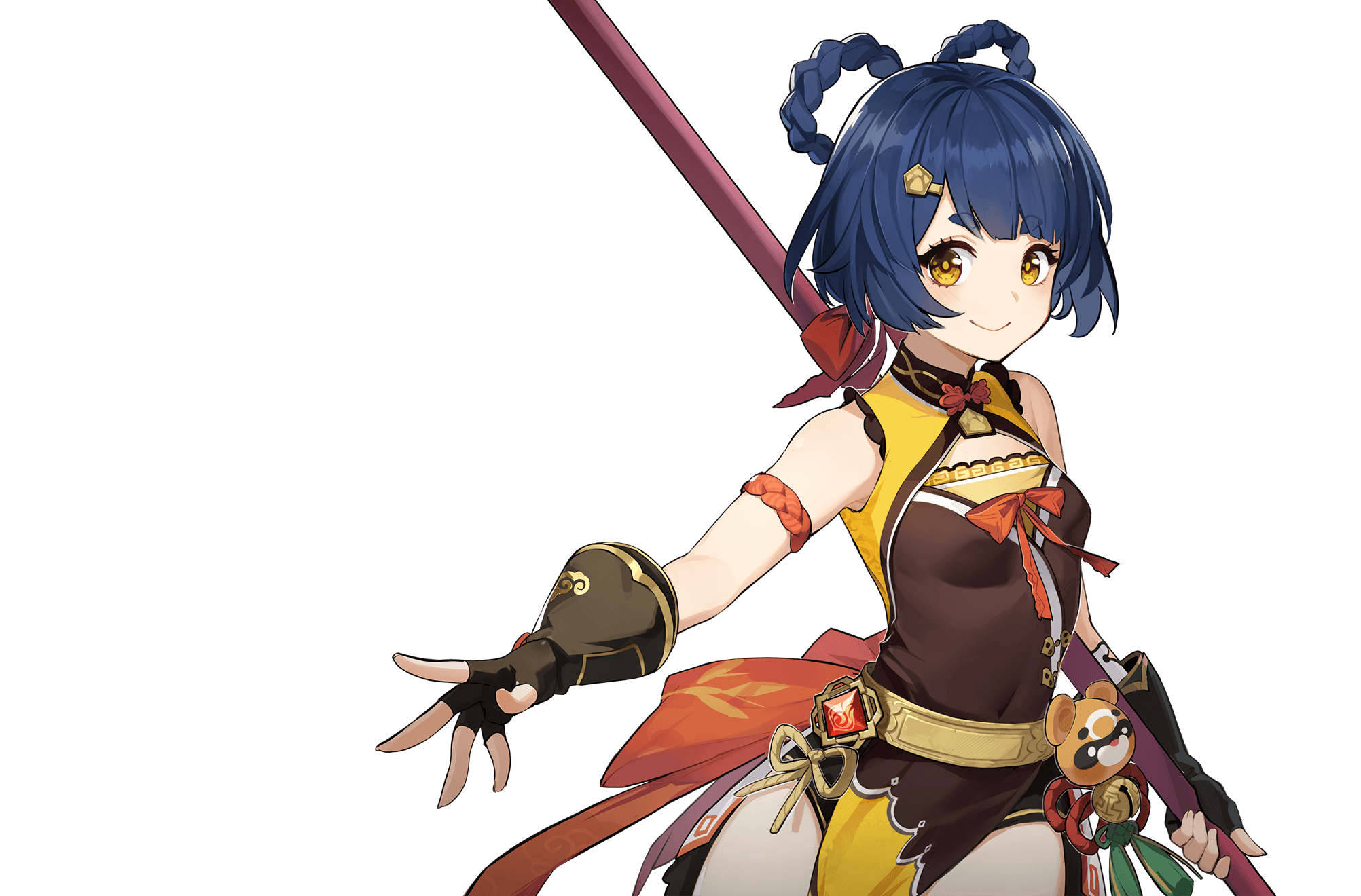 The Head Chef at the Wanmin Restaurant and also a waitress there, Xiangling is extremely passionate about cooking and excels at her signature hot and spicy dishes.
Though still young, Xiangling is a true master of the culinary arts with all the skills of a kitchen veteran. She enjoys a good reputation among the hearty eaters at Chihu Rock.
"There's absolutely no need to be nervous if she wants you to sample her latest creation. It will not disappoint. Promise."

She has a friendly, cheerful, up-beat personality and an immense love for cooking and food. Her slogan is "there is no bad food, only bad cooking".

A renowned chef from Liyue. She's extremely passionate about cooking and excels at making her signature hot and spicy dishes.

"Coming, coming! Here's your Chicken Stir-Fry! And your Mora Meat. And Fried Radish Balls, as you ordered."
In Liyue, there's a place called Chihu Rock, and there stands a restaurant known as Wanmin Restaurant. One must remain focused if they want to keep moving forward on the bustling streets of Liyue. Unsuspecting newcomers to this place are often lured away by wonderful culinary aromas or lead to peek inside stores by curious sounds. Xiangling, who is both chef and waitress at the restaurant, delivers steaming, delicious dishes to the tables.
"Sit anywhere you'd like. I can make whatever you want, even if it's not on the menu!"
The workers at Wanmin Restaurant can recognize a regular, if not by their face, then by the first sentence out of their mouths. A customer that orders without needing a menu has been at least a few times before. However, if they ask "Is Xiangling the chef today?" then they're definitely a regular.

Xiangling has destroyed many a wok in her time. Either the insides would become irreversibly charred from the heat of a Pyro Slime, or cracks would appear due to flash-freezing from a Mist Flower — or, at some step in Xiangling's unconventional cooking process, a small-scale explosion would reduce it to scrap metal. After some heavy consideration on the part of Xiangling's father, he ultimately decided not to banish his daughter from the kitchen, despite the destruction she caused.
As reckless, imaginative, and uninhibited as she may be, it was exactly these traits that led her to create her most successful dishes. "Maybe this isn't so bad..." He tried to convince himself.
Suffice to say that payment for a new wok is a regular feature of the restaurant's monthly ledger.

"There are many secrets to cooking; the most important of which is passion."
When Xiangling decided to learn to be a chef, her father handed her his own handwritten cooking journal, his life's work. That line was written on the title page.
If she was any other person, she would likely have regarded it as some cheesy inspirational quote. However, Xiangling regarded it as a priceless treasure.
To her, her father only secured his footing in the forever-ongoing war between the Li and Yue cuisines by upholding that principle.
However, at that time, the conflict between the two styles was white-hot, with many restaurants feeling the pressure that arose from it. Wanmin Restaurant was no exception.
"Good food is good food, period!"
The monopoly on luxurious ingredients such as matsutake and crabs infuriated Xiangling, her angry response to which was to take over in the kitchen.
It was time for her to build upon the foundation her father gave her and make some changes.
"I'm gonna make super-delicious dishes out of any ingredient!"

Xiangling's liveliness is disastrous for the hilichurls of Jueyun Karst. They one day awoke to find their fighting clubs gone.
Of course, the flora in Dihua Marsh did not fare any better.
After all the work she put in, she finally created some new recipes, such as Hilichurl Club BBQ Fish and Horsetail Sticky Rice and Meat...
She'd never create anything new if she just stuck to the recipes of her predecessors.
One must break with common conception if they are to carve their own path.
When Xiangling finally created her crowning achievement, the Chef's Special Cold-Dressed Fowl, her father paid the price, needing to resort to simple white congee for two days following.
"Mint and Qingxin Flower seem to induce diarrhea..."
She learned a valuable experience to add to her journal.
Strange. She ate her own dishes, but nothing ever happened to her. Xiangling did feel guilty though.
Maybe it was because she was young and healthy, or had somehow built up a resistance to certain toxins... One may never know.

Whenever a customer asks what exactly was the perplexing creature that follows Xiangling around is, she tells them the story:
There was a sudden downpour one day when Xiangling was on her way to fetch some Violetgrass. Halfway there, she was already tired and hungry. She stumbled into a cave, and came across a strange shrine.
So she sat down by the shrine, and took out two pieces of spicy cornbread.
She gobbled down one, but left the other one on the shrine, intending to eat a little later, but then promptly fell asleep.
When she woke up, the other spicy cornbread was gone and a mysterious creature was sitting in front of her, staring.
"Was it good?"
It nodded.
"More?" She took out some jerky from her backpack.
The mysterious creature nodded once again.
This was how Xiangling made a new friend. It seemed to be drawn to Xiangling's cooking, as the creature started following Xiangling around wherever she went.
Xiangling named it "Guoba," after her favorite childhood snack.

After sampling every dish there was in Liyue, Xiangling's culinary skills drastically improved. Her specialty spicy dishes earned the praise of even her father, a veteran chef with over two decades of experience.
She created her unique and complex flavor profile through a generous helping of chili peppers mixed with fruits and herbs for increased aroma. She also created what became the signature dish of Wanmin Restaurant: Black-Back Perch Stew, which combines the richness, color and strong flavors of Li cuisine with the fresh aromas and nutritional content of Yue cuisine.
Some have tried to copy her recipes, but try as they might they can never quite reproduce the way her cooking tastes.
"Braise fresh Violetgrass overnight. Dry, then grind to a fine powder. Sprinkle into any dish for an aromatic boost."
This is one of Xiangling's secret recipes, arrived at through a painstaking process of trial and error.
In Xiangling's case, that means countless bouts of diarrhea, countless bruised knees bashed on rocky cliffs, and countless wasted potfuls of food that didn't quite turn out as expected.

This map of Teyvat is lined with dense notations in various colors, and if you read closely, you can find the places where Xiangling has been, and where she intends to go in future.
"The shellfish of the shallows around Guyun Stone Forest are unmatched in their freshness. They say that 'here be sea monsters'?"
"Sea monster meat tastes great. Should look for Beidou to go fight another one. Will steaming them will eggs make them taste better?"
"There's a dragon in Mondstadt? Great! I just need three days of provisions to get there."
"Valberries are sweet. Lots here. I'll bring a basket. Take some back. See if they'll grow."
"This Mondstadt restaurant's Sautéed Matsutake is way too luxurious! They should just sell the matsutake. Ooh, what if I fry some with Jueyun Chili? Sounds good already. Might as well borrow a kitchen tomorrow and give it a go."
"Haven't found the dragon yet. Am I in the right place?"
...

"You can make something super delicious out of any kind of ingredient."
Xiangling earned the approval of a Vision by shouldering this ideal in a wholehearted and unreserved manner. Even when she would make dishes that could be called "horrifying," her desire to keep trying to match ingredients would never waver.
"Ugh... Qingxin Fried Lizard is actually kinda bad. I think lizards should just be stone-grilled in future."
"Slime fried rice is also rather ordinary. Maybe we'll try putting mushrooms in a slime jus next time."
Though her friends fell around her during the epic battles with the taste of her dishes and advised her to turn back, Xiangling never stopped thinking about how to turn these "special" ingredients into delicious food.
In Xiangling's innocent and persistent heart, as long as they were not poisonous, there were no good or bad ingredients.
Her Vision, after all, proves that even the gods approve of such thinking.

Birthday Letter: What I Want to Do on My Birthday!

I was all-prepared to hop into the kitchen, but my dad told me that I couldn't help out at the restaurant on my birthay, and insteadI should go hang out with friends... Oh, what have you been up to these days?
Picking Matsutake!? Gathering Bird Eggs!? Catching Slimes!?
... Wait, that's what I usually do. Hmm... You've been... looking for chests?
Whatever! Let's go have some food.
There's nothing more enjoyable than cooking a tasty meal for friends!
I'll make you some of Wanmin Restaurant's authentic Boiled Fish!
And then, you can tell me what you think of the flavor!

Charged Attack
Consumes a certain amount of Stamina to lunge forward, dealing damage to enemies along the way.

Guoba loves to eat spicy food. Problem is, his stomach can't handle something this spicy.

Displaying her mastery over both fire and polearms, Xiangling sends a Pyronado whirling around her.
The Pyronado will move with your character for so long as the ability persists, dealing Pyro DMG to all enemies in its path.

There will never be enough heat.
Never.

Increases the flame range of Guoba by 20%.

When Guoba Attack's effect ends, Guoba leaves a chili pepper on the spot where it disappeared. Picking up a chili pepper increases ATK by 10% for 10s.

When Xiangling cooks an ATK-boosting dish perfectly, she has a 12% chance to receive double the product.

Crispy Outside, Tender Inside

Enemies hit by Guoba's attacks have their Pyro RES reduced by 15% for 6s.

The last attack in a Normal Attack sequence applies the Implode status onto the
enemy for 2s. An explosion  will occur once this duration ends, dealing 75% of Xiangling's ATK as AoE Pyro DMG.

Increases the Level of Pyronado by 3.
Maximum upgrade level is 15.

Pyronado's duration is increased by 40%.

Increases the Level of Guoba Attack by 3.
Maximum upgrade level is 15.

For the duration of Pyronado, all party members receive a 15% Pyro DMG Bonus.