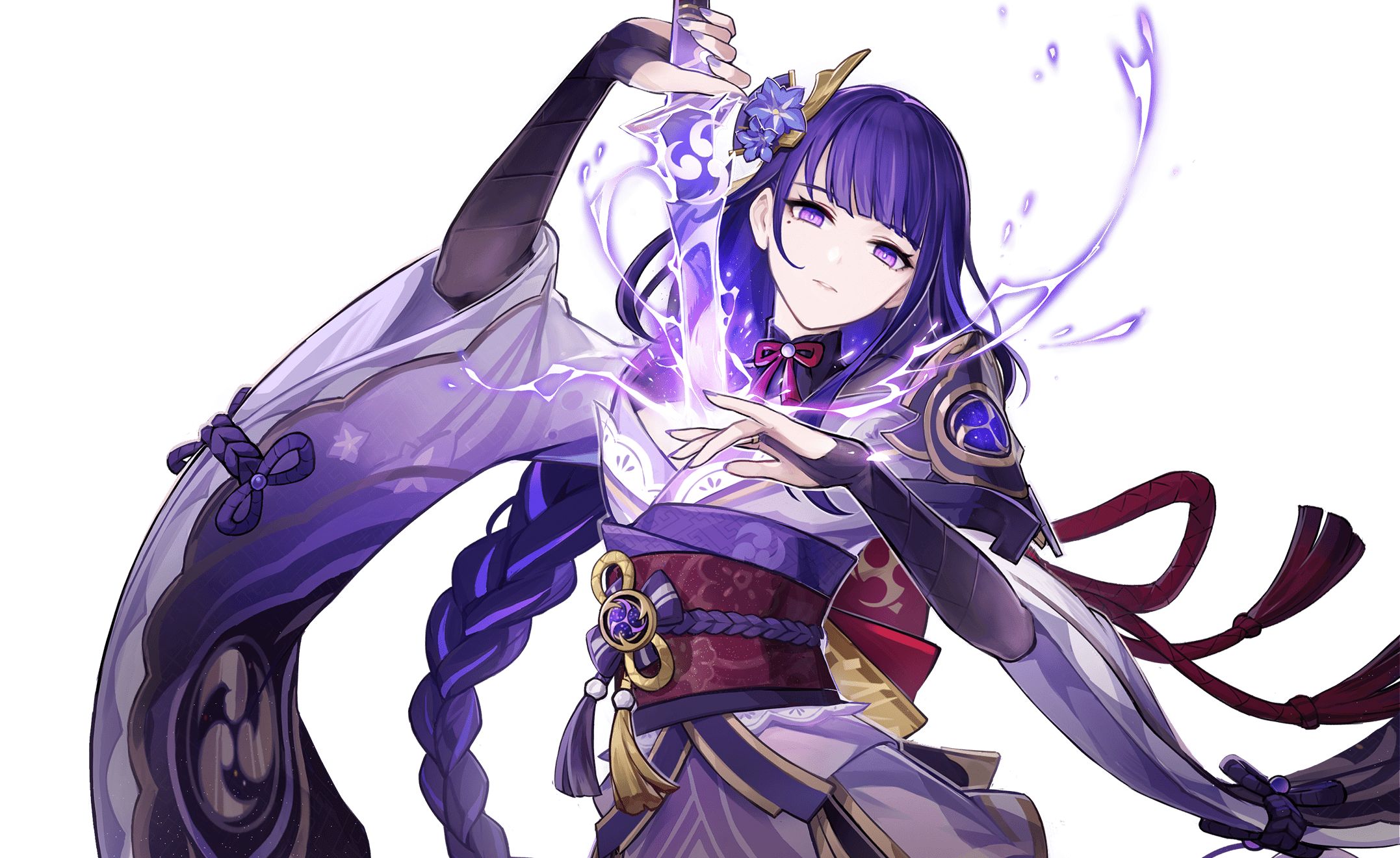 The Raiden Shogun is the awesome and terrible power of thunder incarnate, the exalted ruler of the Inazuma Shogunate.

Her Excellency, the Almighty Narukami Ogosho, who promised the people of Inazuma an unchanging Eternity.

Charged Attack
Consumes a certain amount of Stamina to perform an upward slash.

Plunging Attack
Plunges from mid-air to strike the ground below, damaging opponents along the path and dealing AoE DMG upon impact."

The Raiden Shogun unveils a shard of her Euthymia, dealing Electro DMG to nearby opponents, and granting nearby party members the Eye of Stormy Judgment.

Eye of Stormy Judgment
When characters with this buff attack and hit opponents, the Eye will unleash a coordinated attack, dealing AoE Electro DMG at the opponent's position.
The Eye can initiate one coordinated attack every 0.9s per party.

Musou Isshin
While in this state, the Raiden Shogun will wield her tachi in battle, while her Normal, Charged, and Plunging Attacks will be infused with Electro DMG, which cannot be overridden. When such attacks hit opponents, she will regenerate Energy for all nearby party members. Energy can be restored this way once every 1s, and this effect can be triggered 5 times throughout this skill's duration.
While in this state, the Raiden Shogun's resistance to interruption is increased, and she is immune to Electro-Charged reaction DMG.

Shogan Byakugen no Rin
When nearby party members use their Elemental Bursts, the Raiden Shogun will build up Resolve based on the amount of Energy they consume.
The maximum amount of Resolve stacks is 60.

When nearby party members gain Elemental Orbs or Particles, Chakra Desiderata gains 2 Resolve stacks.
This effect can occur once every 3s.

Each 1% above 100% Energy Recharge that the Raiden Shogun possesses grants her:

Mora expended when ascending Swords and Polearms is decreased by 50%.

While in the Musou Isshin state applied by Secret Art: Musou Shinsetsu, the Raiden Shogun's attacks ignore 60% of opponents' DEF.

Increases the Level of *Secret Art: Musou Shinsetsu by 3.
Maximum upgrade level is 15.

Increases the Level of Transcendence: Baleful Omen by 3.
Maximum upgrade level is 15.

While in the Musou Isshin state applied by Secret Art: Musou Shinsetsu, the Raiden Shogun's Normal, Charged, and Plunging Attacks will decrease all nearby party members' (but not including the Raiden Shogun herself) Elemental Burst CD by 1s when they hit opponents.\nThis effect can trigger once every 1s, and can trigger a total of 5 times during the state's duration.