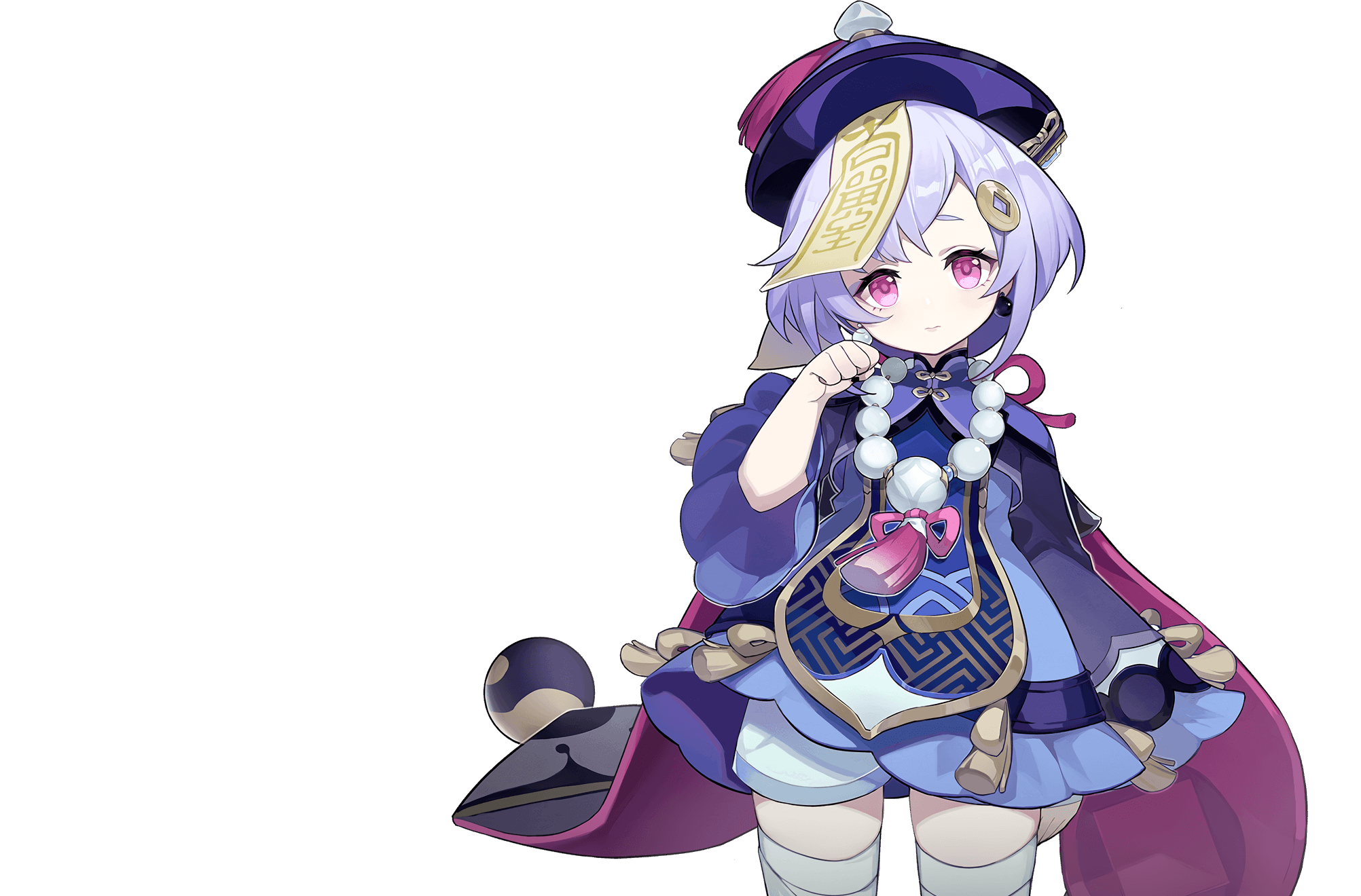 An apprentice and herb gatherer at Bubu Pharmacy.
"Blessed" by the adepti with a body that cannot die, this petite zombie cannot do anything without first giving herself orders to do it.
Qiqi‘s memory is like a sieve. Out of necessity, she always carries around a notebook in which she writes anything important that she is sure to forget later.
But on her worst days, she even forgets to look at her notebook...

Due to being a zombie, Qiqi lacks facial expression. She hopes that's okay.
She may look like a zombie, but she's surprisingly limber due to a strict calisthenics regimen.
Her memory is poor. She forgets easily, and that is partly why she can seem cold to others.
Her appearance is forever frozen at the point of her passing, so estimates of her age are not to be relied upon. Zombies requires orders to act, but due to some reason or another, Qiqi's present state is that of giving herself orders.

Due to being a zombie, Qiqi lacks facial expression. She hopes that's okay.
She may look like a zombie, but she's surprisingly limber due to a strict calisthenics regimen.
Her memory is poor. She forgets easily, and that is partly why she can seem cold to others.
Her appearance is forever frozen at the point of her passing, so estimates of her age are unreliable.
Zombies require orders to act, but due to some reason or another, Qiqi is presently giving herself orders.

Usually, zombies are cold and stiff, which forces them to locomote by hopping about.
As such, Qiqi keeps up a calisthenics regimen to retain a human-like form.
The 77th-generation Director of the Wangsheng Funeral Parlor, Hu Tao, doesn't see the point of all this. Whenever she meets Qiqi, she will say: "It would be easier if you just let me bury you."
Qiqi, of course, has no wish to be buried, and so conducts her exercises at night when no one's about.
Qiqi's memory falls far behind those of non-undead disposition.
If she does not continue to reinforce her impressions of someone, she will completely forget them in three days tops.
But who knows, this might be a good thing — for a person with painful memories, forgetting may, in fact, be a form of release.
The person Qiqi must remember most... not only does this person have a very punch-able face, but she also shows up every single day.
As such, Qiqi isn't too concerned about her poor memory.

Qiqi is very petite indeed, but is in fact a very powerful zombie. Her short stature is hardly any impediment, but is instead good for high-speed movement.
In combat, Qiqi will unleash the self-control that she usually maintains, allowing her body to return to an undead state, increasing her strength and speed.
"You're dead."
Once she has stoically defeated her enemies, Qiqi will once again get her muscles under control, returning to her normal state.
She has been threatened in the past by Treasure Hoarders while picking herbs by herself.
Now, a little girl, all by herself, seems like an easy target, no?
Who would have thought that this girl could send a whole crew flying?
This is why we should always remember never to judge a person based on appearances. Or a zombie, for that matter.

Zombies mostly require orders from the person who awakens them to move. But strictly speaking, Qiqi has never been awakened.
As such, she counts as a very rare case of a zombie that gives itself orders.
If these orders are simple ones like "defeat the enemy," Qiqi has no problem fulfilling them.
But when faced with complex instructions such as "go to Jueyun Karst, climb the sheer rock faces and pick herbs," Qiqi sometimes winds up stuck below the cliffs, unable to give up no matter how many times she tries and fails to scale the cliff.
The method to cancel her orders is very simple — hug Qiqi from behind, tell her something like "I love you the most," and the orders will dissipate, just like that.
Unfortunately, there's just no element of sincerity when Baizhu does it, leading to greatly reduced results.
Perhaps someday, someone will come along who understands that such words cannot be spoken lightly, and who slowly but carefully releases the hold that Qiqi's orders have over her...
What will Qiqi's response be then?

This ancient story has long been forgotten by mortals.
An ordinary herb-picking lass named Qiqi lost her way and trespassed the realm of the adepti. Injuring her right leg in a fall, she hurriedly hid in a cavern to rest.
Even occupied as she was in bandaging her wound, she could hear sounds that did not belong to the mortal plane. But she could have never expected that with a huge crash, she would forever be trapped between life and death.
Whether adepti or demons, just or wicked, all understood that she was an innocent mortal caught in the crossfire.
Or perhaps it was by the will of heaven that she received a Vision in her dying moments, and so ended this contention between adepti and demon.
The adepti could not bear to let her die, and each imparted to her a portion of their strength, meaning to breathe life back into her body.
Qiqi did indeed awaken and live again, but went into a berserk state, unable to control the adepti energy raging through her.
Seeking to end the disturbance, Mountain Shaper had no choice but to seal the hapless maiden in amber.

After hundreds of years, Qiqi was discovered by humans, still trapped in the amber, and was brought to Wangsheng Funeral Parlor for burial.
The mountain roads were treacherous, however, and the amber was bumped about. Coupled with the passing of many years, the seal on Qiqi was all but spent.
She awakened in the middle of the night, broke the amber in secret, and fled.
Following the herb-picking habits of her previous life, Qiqi headed right for the hills.
By chance, she met Baizhu, the boss of Bubu Pharmacy, on the way, and he took her in.
Now, Baizhu was a doctor of great skill, but he was hardly a man of high caliber or great courage.
Even so, he took her in, nevermind that her memory was so poor that she could not even sort herbs out.
It does seem that his acceptance of Qiqi has something to do with his own personal pursuits.
Qiqi is stiff, but not slow, and has long realized this. However, she does not take it to heart.
Perhaps she has seen too much, or been alone for too long... But what remains true is that she treasures his concern, even if there is some other motive behind it.

A Home-and-Away Handbook of Practical Wisdom for the Undead

Qiqi carries something with her that looks like a notebook.
Qiqi's memory is very poor, so it is an object of irreplaceable importance if she is to smoothly go about her daily life.
The words within are written in a centuries-old style, and are very elegant indeed.
The first page is an instructional on calisthenics.
Moving past that, one finds the descriptions of various herbs and some "orders."
Qiqi needs to give herself orders, so she has very precise instructions to ensure smooth transition.
She has also dutifully written down all the things she needs to do in a day.
Recently, she has also added a section on "brain training" and "mnemonic methods."
At this point, it has become a true "dummy's guide" on just about anything.
But if the day ever comes when Qiqi also forgets to look at her notebook... there would truly be nothing for it then.

Qiqi's Vision was given to her in the last moment of her life.
She wanted to stop the clock from turning. She wanted to live happily again.
She feared death. She wanted to live. She missed her family... These feelings coalesced at last into "ice."
"If only I could freeze time... How wonderful would that be?"
As she thought thus, tears fell from the moribund girl's eyes upon the Vision that had appeared before her.
The mighty and illuminated adepti all acknowledged this as a legitimate form of "illumination" — the yearning of humanity for bygone days is, after all, a desire to protect that past.

I use this to prevent warming and rot of Dr. Bai's precious ingredients. Yes.

Qiqi releases the adeptus power sealed within her body, marking nearby enemies with a Fortune-Preserving Talisman that deals Cryo DMG.

Fortune Preserverving Talisman
When enemies affected by this Talisman take DMG, the character that dealt this DMG regenerates HP.

"I am the Fortune Preserver, the Maiden of Resurrection." - Qiqi does not remember these words.

When a character under the effects of Adeptus Art: Herald of Frost triggers an Elemental Reaction, their Incoming Healing Bonus is increased by 20% for 8s.

A Glimpse into Arcanum

When Qiqi hits enemies with her Normal or Charged Attacks, she has a 50% chance to apply a Fortune-Preserving Talisman for 6s. This effect can only occur once every 30s.

Displays the location of nearby resources unique to Liyue on the mini-map.

When the Herald of Frost hits an enemy marked by a Fortune-Preserving Talisman, Qiqi regenerates 2 Energy.

Frozen to the Bone

Increases the Level of Adeptus Art: Preserver of Fortune by 3.
Maximum upgrade level is 15.

Targets marked by the Fortune-Preserving Talisman have their ATK decreased by 20%.

Increases the Level of Adeptus Art: Herald of Frost by 3.
Maximum upgrade level is 15.

Using Adeptus Art: Preserver of Fortune revives all nearby fallen characters and regenerates 50% of their HP. This effect can only occur once every 15 mins.