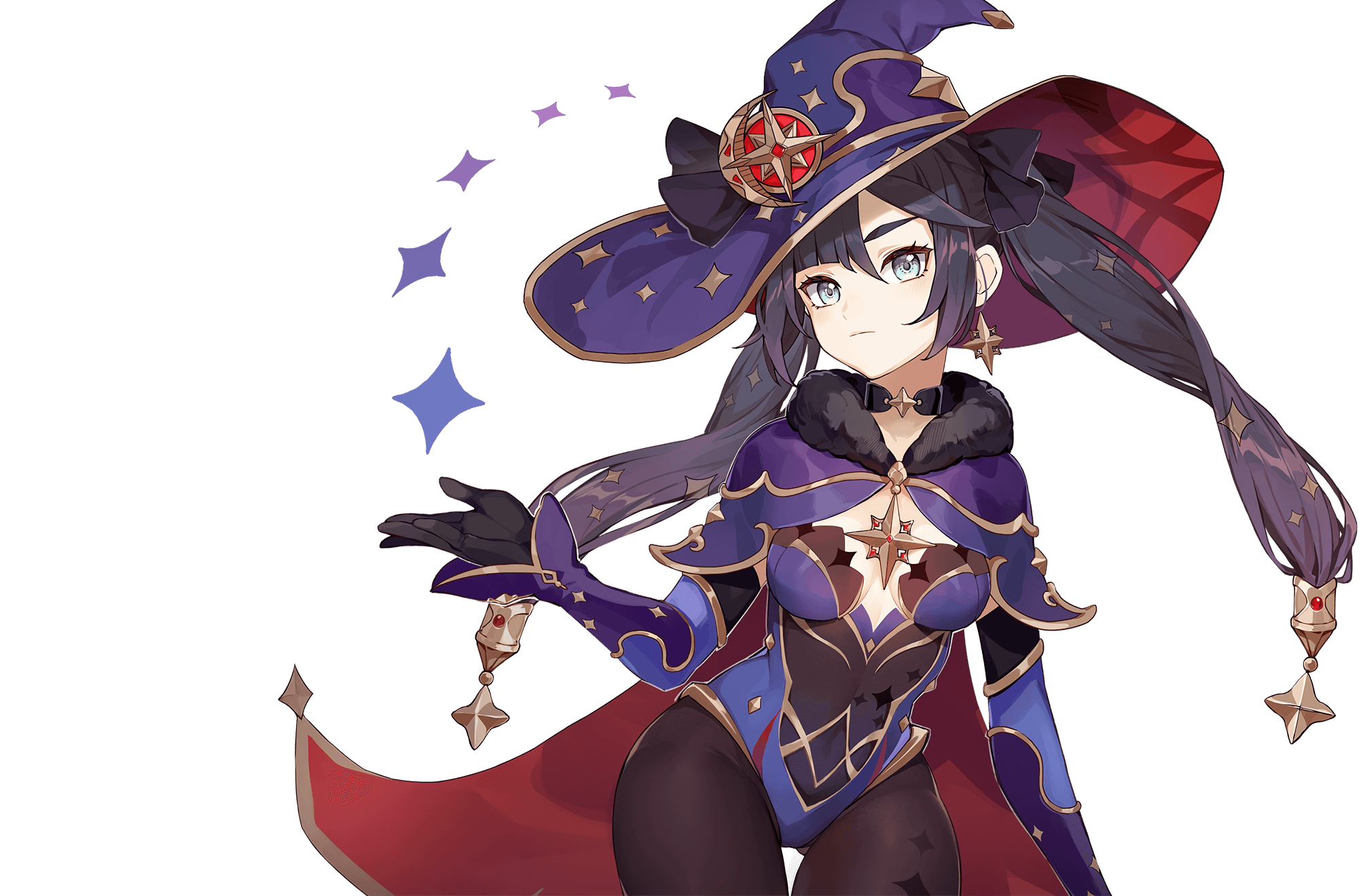 A mysterious young astrologer who proclaims herself to be "Astrologist Mona Megistus," and who possesses abilities to match the title. Erudite, but prideful.
Though she is often strapped for cash and lives a life of thrift, she is resolved to never use astrology for profit... It is this very resolution that has caused her to constantly fret about money.

A mysterious young astrologer who proclaims herself to be "Astrologist Mona Megistus," and who possesses abilities to match the title. Erutide but prideful.

Recently, Mona's teacher, an old but highly skilled female astrologist, has entrusted a very important task to her.
Her teacher has an erstwhile rival-friend in Mondstadt, and she wanted Mona to retrieve a highly confidential box from that person's successor.
"If you dare look inside that books... Well, you'll see."
That was the warning Mona received before departing.
To Mona's surprise, this successor was none other than the Spark Knight, Klee.
The box was still extant, but due to Klee's actions and a series of accidents... Mona unwittingly unraveled the enigma behind the box.
"I—I'm done for. The thing inside this was the dark history of her youth... she will kill me if I go back like this..."
Mona was thus forced to stay in Mondstadt, beginning a bitterly frugal but bountifully fulfilling existence.

Mona's astrology utilizes hydromancy, and she once explained the underlying principles thusly:
"It is people's fate that shines in the night sky, and though its reflection in water is but an illusion, it reveals the truth nonetheless."
No-one else can quite comprehend this principle, but Mona's ability convinces people to believe in it anyway.
Albeit, sometimes grudgingly...
Her astrological readings are exceptionally precise, and she will neither lie nor hold anything back when revealing the results of her readings.
"Your son says that he's made it. That's a lie."
"You've got no chance with him. In fact, he will soon leave you."
The cold, hard truth is laid bare before people' eyes, complete with all the grisly details that they would rather remained buried.
Mona will make no exceptions to this, and as such she can seem completely lacking in human emotion.
But sometimes, on a clear night, she can be seen on a high mountain slope.
There, Mona gazes up at the stars in the sky — so close, she feels, that she could almost reach out and touch them — with gentle eyes, humming an unknown tune to herself.

Having never studied the art of finance, the astrologist Mona is always hovering around the poverty line.
In order to save on food expenses, she once ate mushrooms for an entire month straight. If not for some relief funds coming from time to time, she would have had trouble eking out a living.
Mona does in fact have some money set aside. Even though she must eventually run dry without an income, she can slow the bleeding by scrimping in the food department.
So where does the rest of the Mora go? Well, if you've ever had a look inside her lab, then know that the big pile of astrology-related apparatus and tools in there didn't come out of thin air.
In fact, all of them come with a hefty price tag — books from Liyue, an astrolabe from Sumeru... The shipping fees alone are impressive.
That Mona should be in abject poverty comes, therefore, as no surprise.
In order to support herself, Mona eventually took up a commercial contract — her contributions to a column about constellation in The Steambird have become her most stable income source.
Now having a monthly income, Mona could have left her life of poverty. But how could an astrologist's pursuit of knowledge end here?
Whenever she gets paid, Mona will immediately shell out on more astrology-related resources, returning to a state of destitution once more.
This process plays out every month.
Today, too, is another day Mona worries over Mora.

Mona will sometimes meet up with Klee and Albedo, her primary reason being to eat a free meal.
Secondary to that is to exchange pointers with Albedo.
Since they are both people who seek to unveil the principles of the world, and both are students of famed masters, so aligning themselves with one another and working together is perfectly normal.
Mona strenuously defends her teacher's image in front of Albedo.
However, she also often complains about "that old hag."
"Your say that your line has a unique pedigree — but you also say that your hag of a teacher is a stubborn dimwit. Which of your descriptions of your master is accurate?"
Albedo could not help but ask this question — and indeed, Mona found that she had never given this question much thought either.
Stroking her chin, she considered this deeply for a moment.
"Hmph. The techniques passed down to me are exceptional, of course, but my teacher is not my equal.
Does she know the market rates for eggs, butter or wheat? In this regard, I have already far surpassed her."

During her apprenticeship, Mona found that the subtle abstractions of her master's teachings could explain the laws that governed the existence of all things.
Human hearts were guided by these laws, and if one had great enough powers of calculation, all the mysteries of the world could be understood.
Mona once believed this to be true.
But when she had to strike out on her own and live day-to-day, she found herself doubting.
Not everyone lived wealthy and comfortable lives. Some neither had food nor warm clothes, living no differently from beggars.
And it was just such an adventurer who, when meeting Mona while she was out looking for fruits and vegetables to fill her stomach, shared half their food with her.
"Out here, we've gotta have each other's backs."
This was not something inscribed on these so-called principles of the world. And many other such things she encountered on her journey — the honesty of a thief, a robber's change of heart, a coward's courage, the good deeds of a wicked person...
Mona began to have some doubts, but she also felt like she finally had her feet on solid ground.
When she was again alone with her thoughts under the stars, she marveled that her research had been so full of holes.
Perhaps she would have to continue researching the world's principles for the rest of her life.

The Court of Fontaine's mainline newspaper, The Steambird, has many a featured section that contains all sorts of news and gossip drawn from every corner of the seven nations.
The section Mona contributes to is known as "All Things Astrological," and it is a column specifically targeted at hobbyists and professionals. That she had this opportunity at all was pure chance.
When the previous contributing author was traveling the world, he heard tell of a strange astrologist, and his hobbyist's curiosity compelled her to seek her out.
Their correspondence left him deeply impressed.
As it happened, he was also looking to retire, and seeing that Mona was strapped for Mora, reached out to help her by recommending her to the editor-in-chief of The Steambird.
When Mona released her first column, "An Introduction to Astrology," the column, heretofore known for being easy reading, experienced a massive shift in tone.
Most of each issue was dedicated to discussing the movement of celestial bodies and other difficult (and obscure) topics. Academic quotations, dense footnotes and even the occasional hand-drawn star maps abounded in these writings.
The editor-in-chief could not help but feel worried that this approach was too academic. Would it find acceptance with long-time readers? As it turned out, there was no need to fret. The publishing house received a great many letters that read something like this:
"Wow, this is amazing. I don't really get it, but this is super interesting. Consider me a fan of Astrologist Mona Megistus."
After getting approval to continue submitting manuscripts, Mona could finally heave a sigh of relief.
Now, how best to celebrate... Ah yes. Perhaps she should use her first paycheck to purchase that latest-edition planetarium she'd had her eye on for a while now...

To Mona, that her Vision was sent to her from the gods doesn't mean a great deal.
This is not to say that possessing an external focus for elemental power is not useful.
Having power is always a good thing, but when compared to lofty "truth," "martial prowess" is such a pathetically small concept.
The gods, too, are bound by the rules of this world. Mona seeks the final truth of the world, hidden amidst the sea of stars.
As such, she does not have any reverence for her Vision, which the people of this world consider to be a sign of divine favor and the source of all power.
Nonetheless, this item that serves no practical use in her hands is something that she treasures greatly.
It was gifted to her by her teacher as a teaching aid, and it is the only evidence of their time together as master and pupil.
She preserves these distant memories with great care. This exquisitely-made teaching aid thus accompanied her everywhere, like an accessory worn by any other maiden.
Until one day, when a Vision of her very own would quietly indwell this old teaching aid...

Plunging Attack
Gathering the might of Hydro, Mona plunges towards the ground from mid-air, damaging all enemies in her path. Deals AoE Hydro DMG upon impact with the ground.

Creates an illusory Phantom of fate from coalesced waterspouts.

The Phantom has the following special properties:

Only one Phantom created by Mirror Reflection of Doom can exist at any time.

Skilled astrologers have always dreamed of using a phantom facsimile
of themselves to ward off imminent ill fate, but Mona must be the first to make such a mockery of it in all of Teyvat.

When under the effect of Illusory Torrent, Mona can move at high speed on water.
Applies the Wet status to nearby enemies when she reappears.

This is some thing that Mona can do, but her teacher cannot. Well, but it's not as if her teacher would pursue any matter concerning Hydro Visions anyway...

Mona summons the sparkling waves and creates a reflection of the starry sky, applying the Illusory Bubble status to opponents in a large AoE

Illusory Bubble
Traps opponents inside a pocket of destiny and also makes them Wet. Renders weaker opponents immobile. When an opponent affected by Illusory Bubble sustains DMG, the following effects are produced:

Omen
During its duration, increases DMG taken by enemies.

It was from the time that gods first traced the lights in the heavens with their eyes that the notion of "fate" was born.

After she has used Illusory Torrent for 2s, if there are any enemies nearby, Mona will automatically create a Phantom.
A Phantom created in this manner lasts for 2s, and its explosion DMG is equal to 50% of Mirror Reflection of Doom.

Increases Mona’s Hydro DMG Bonus by a degree equivalent to 20% of her Energy Recharge rate.

When Mona crafts Weapon Ascension Materials, she has a 25% chance to refund a portion of the crafting materials used.

The effects of Hydro-related Elemental Reactions are enhanced for 8s after a character hits an enemy affected by an Omen:

When a Normal Attack hits, there is a 20% chance that it will be automatically followed by a Charged Attack.
This effect can only occur once every 5s.

Increases the Level of Stellaris Phantasm by 3.

When a character attacks an enemy affected by the Omen status effect, their CRIT Rate is increased by 1.5%.

Increases the Level of Mirror Reflection of Doom by 3.

Upon entering Illusory Torrent, Mona gains a 60% increase to the DMG of her
next Charged Attack per second of movement.
A maximum DMG Bonus of 180% can be achieved in this manner. The effect lasts for no more than 8s.