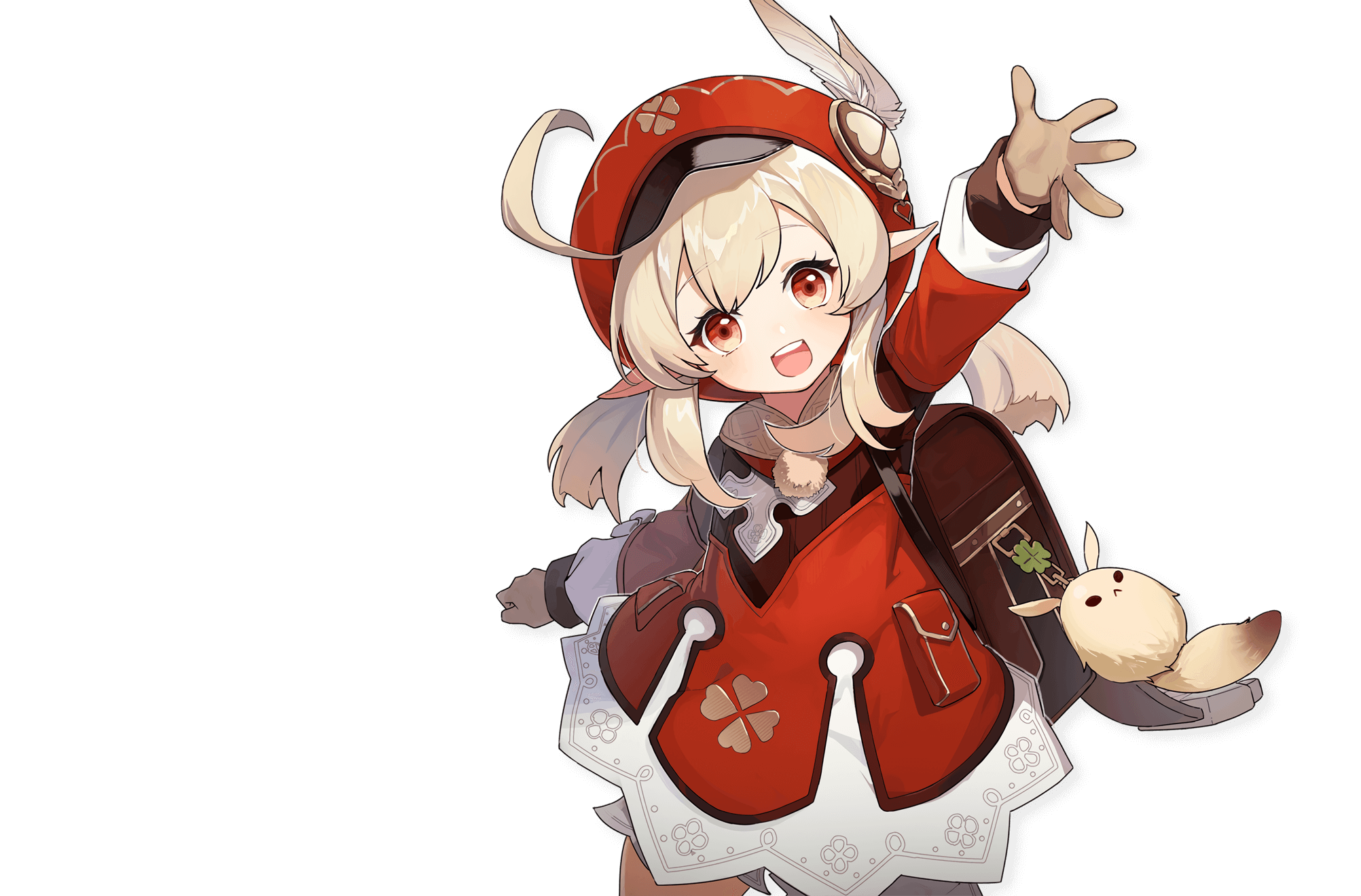 Knights of Favonius Spark Knight! Forever with a bang and a flash!
—And then disappearing from the stern gaze of Acting Grand Master Jean.
Sure, time in solitary confinement gives lots of time to think about new gunpowder formulas...
But it'd still be better to not be in solitary in the first place.

An explosives expert and regular at the Knights of Favonius' confinement room. Also known as Fleeing Sunlight.

When asked about the strongest knight of the Knights of Favonius, three names are likely to come up from the patrons in the taverns of Mondstadt:
the highly-reputable Acting Grand Master Jean, Cavalry Captain Kaeya, and the mysterious tycoon Diluc.
However, some claim to have witnessed, through drunken eyes or pale moonlight, a knight in red, leveling the entire Stormbearer Mountains.
If one wants to find this mysterious knight, then they need look no further than the solitary confinement cell inside the Knights of Favonius Headquarters.
If the cell is found vacant... then something explosively unfortunate is likely about to take place...
Klee is well known for the danger she presents. As an official member of the Knights of Favonius, her strength in combat cannot be underestimated.
But as the hyperactive child that she also is, her destructive capabilities should not be overlooked either.
While other Mondstadt children her age are still playing with regular toys, Klee's favorite toys are... live explosives.

Three years ago, Klee was entrusted to the Knights of Favonius by her parents, who were famed adventurers.
This was how the fates of Klee and "that boy in white" became intertwined with their "family" in Mondstadt.
Klee is curious about everything in the outside world. She has an innocent passion for explosives, and is incredibly enthusiastic in all that she does.
Under the protection of the Knights of Favonius, she is protected from harm and those of ill intent.
This young girl soon forged an unbreakable bond with everyone in the Knights of Favonius.
Being sent to the solitary confinement by Jean, helping Amber improving Baron Bunny, as well as developing new bombs...
These parts of Klee's life are all invaluable treasures to her.

"The apple doesn't fall far from the tree..."
Jean sighs to herself as she sits down at her desk, head in hands, faced once again with a stack of damage reports.
Carts blasted beyond repair, storage shacks burnt down, forest fires that the knights barely managed to contain...
Not to mention the suspiciously high number of deaths from unnatural causes among the fish of Starfell Lake.
There's only one potential culprit behind all of this, and she just so happens to be one of their own...
"Klee!"
Faced with Jean's stern glare, the harmless-looking Klee surrenders all her concealed explosives.
She is then escorted to solitary confinement, despite her protests amidst floods of tears.
This occurs about once or twice a week at the Knights of Favonius.

Of course, Klee always tries to help clean up the messes she's made.
However, sometimes her reckless personality makes things worse still.
For example, she once wanted to apologize to everyone by making some BBQ fish, but ended up blowing the stove sky-high.
Then there was the time she got into a fluster and tried to put the fire out... with wind — which obviously resulted in the whole plain going up in flames.
Klee is not a bad kid by nature, it's just that her curious and playful nature always results in her failing to think before she acts.
And every time she gets into trouble, she guiltily tries to make up for it.
Though once Jean lets Klee out of solitary confinement, there's usually no more than a day or two before the sound of explosions return to Mondstadt.
The "Spark Knight" always manages to live up to her title in a range of unexpected ways.

Though Klee always ends up causing trouble for the Knights of Favonius and Mondstadt, she isn't just some rookie who drags the team down.
On the contrary, her skills with explosives can be quite handy if applied correctly.
Once, Jean was able to defeat a horde of invading hilichurls utilizing Klee's special talents alone.
However, Klee also forever changed the face of Stormbearer Mountains in that same operation due to recklessly placing too many charges...
Needless to say, everyone was more than a little shocked, but at least no-one from the Knights of Favonius was injured.
Since then, the legend of the "Red Knight of the Stormbearer Mountains" began to circulate around Mondstadt.
Rumor has it that she is cloaked in red, and clutches the greatest treasure the Knights of Favonius have.
However, only Klee knows what this "treasure" truly is.

To Klee, the Knights of Favonius are family, and she can't imagine life without them. Her biggest role model, however, is still her birth mother — the avid adventurer, Alice.
A highly renowned adventurer and author of the popular Teyvat Travel Guide, in Klee's mind her incredible mother can do anything.
Whether it's the way she used to guide Klee step-by-step through the techniques for adding gunpowder and selecting fuses, or the encouragement she'd give Klee to express her creativity through ever-bolder and more beautiful fireworks...
Or that time she taught her how to identify Starsnatch Cliff's load-bearing points, then place explosive charges accordingly to bring the whole thing down...
Or that time they stuck their tongues out at each other awkwardly while being told off by Huffman of the Knights of Favonius...
Klee has many treasured memories of her mother.
This was the way things were until her parents left to travel to somewhere dangerous and far away. They entrusted Klee to the care of Albedo and the Knights of Favonius.
Though still small, Klee knew she would one day become just like her mother.
One day, her explosives would become something that her mother would be proud of.

Dodoco is Klee's first friend, and one of her best.
A very long time ago, her mother made this doll for her by hand.
Alice affixed it to Klee's four-leaf clover, and hung on her big backpack.
From that day forth, Klee and Dodoco became inseparable.
Her mother said that this would ensure that Klee would never be lonely and that she would have a friend to confide in even when she was alone.
They would also protect each other in times of danger, just like Amber and Baron Bunny.
This, however, caused the Knights no need of worry — considering the other things Alice and her daughter had invented, perhaps this, too, might explode at any time...
"Dodoco" is a name Klee picked herself.
When asked what this name meant, she flushed red for a good long while before replying: "It means... Klee's best friend!"

Asking Klee how she obtained a Vision will probably get you nowhere — she doesn't know, either.
A natural-born pyromaniac, Klee had already been acknowledged by a Vision from a very young age.
According to Klee herself, she had been creating a bomb that was "even bigger than super big!"
This was her very first solo project, but the results were far from expected—
Well, she "only" blew her small workshop sky high, leaving a mountain of smoking ash.
But rather than being disappointed, Klee was pleasantly surprised to see a flaming Vision emerge from those ashes.
How did Klee receive this divine acknowledgment?
Was it her talent and passion for explosives, the individualistic nature she got from her mother, or her shining innocence?
Regardless, Klee had already obtained such a coveted item at a tender, carefree age.
Regardless of what she faces as she grows up, she will never give this "present" up.

Charged Attack
Consumes a certain amount of Stamina and deals AoE Pyro DMG to enemies after a short casting time.

Plunging Attack
Gathering the power of Pyro, Klee plunges towards the ground from mid-air, damaging all enemies in her path. Deals AoE Pyro DMG upon impact with the ground.

On the third bounce, the bomb splits into many mines. The mines will explode upon contact with enemies, or after a short period of time, dealing AoE Pyro DMG.

Jumpy Dumpty is Klee's good friend! She can't help but introduce him to everyone

The knights all believe that Klee must have a lucky star watching over her to have never been hurt by any of her own bombs...

When Jumpy Dumpty and Normal Attack deals DMG; Klee has a 50% chance to obtain a Explosive Spark.
This Explosive Spark is consumed by the next Charged Attack, which costs no Stamina and deals 50% increased DMG.

When a Charged Attack results in a CRIT, all party members gain 2 Elemental Energy.

All Of My Treasures!

Displays the location of nearby resources unique to Mondstadt on the mini-map.

Attacks and Skills have a chance to summon a spark that bombards opponents, dealing DMG equal to 120% of Sparks 'n' Splash's DMG.

Being hit by Jumpy Dumpty's mines decreases enemy DEF by 23% for 10s.

If Klee leaves the field during the duration of Sparks 'n' Splash, her departure triggers an explosion that deals 555% of her ATK as AoE Pyro DMG.

While under the effects of Sparks 'n' Splash, other members of the party will continously regenerate energy.
When Sparks 'n' Splash is used, all party members will gain a 10% Pyro DMG Bonus for 25s.