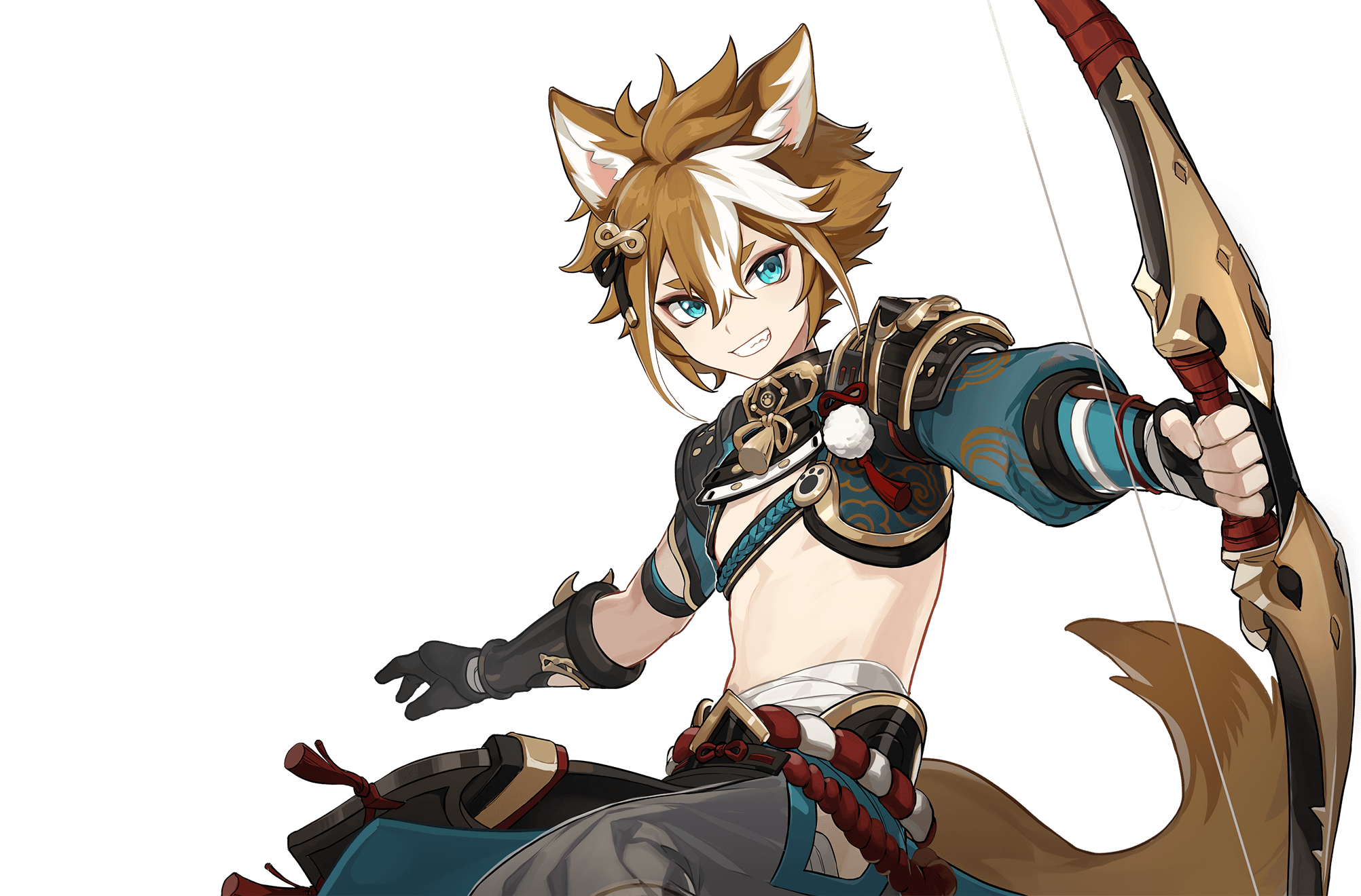 The great general of Watatsumi Island's forces. He has gained respect and prestige, but always shows himself to be a humble leader.

He is deeply trusted by his subordinates and is someone with whom you can share your feelings without shame.

The great general of Watatsumi Island's forces. He is deeply trusted by his subordinates. 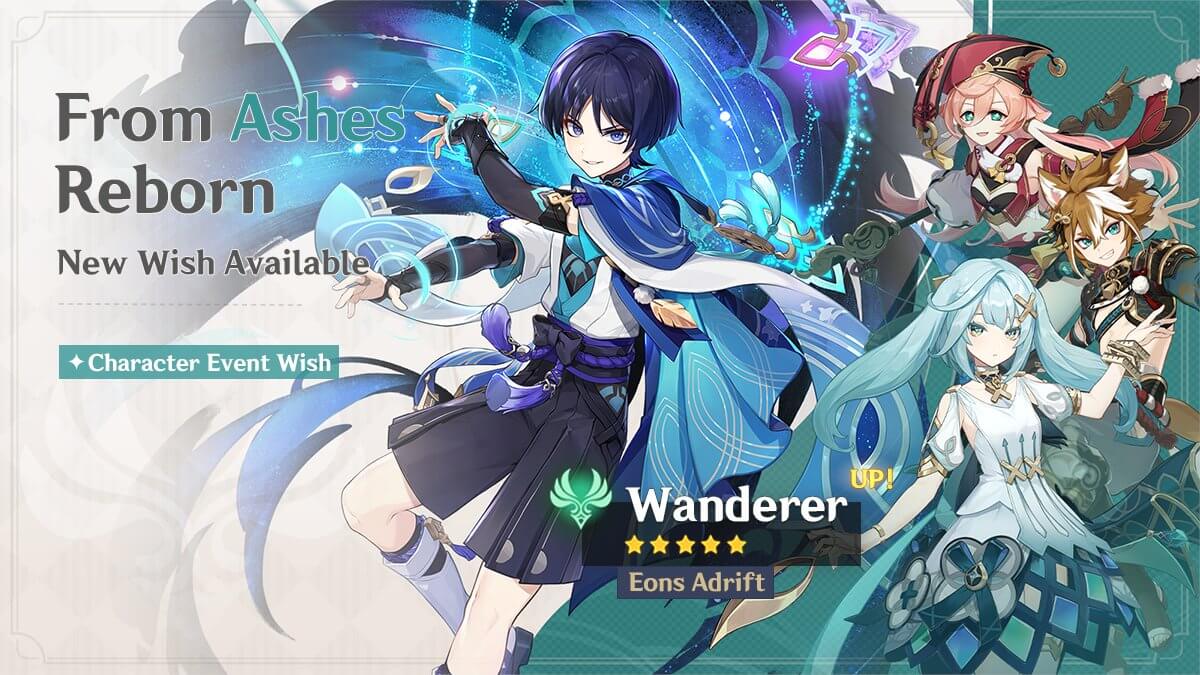 Gorou is the great general of Watatsumi Island's military, and he is deeply loved by his subordinates.
During the period of the Vision Hunt Decree, Gorou led the forces of Watatsumi against the Shogun's Army, and successfully held the line against them.
The troops call him the "ever-victorious pointy-eared general," a nickname that has also seen broad use among Shogunate warriors.
In private, however, Gorou puts on no airs and is a straightforward person, which has led him to be regarded by all as the man with the plan.
But even such an exemplary general must have his fair share of troubles...

Gorou was once an ordinary Watatsumi soldier.
During a certain special operation, Gorou's unit, Gorgasia II, faced an unprecedented crisis.
Their captain had been felled by a stray arrow, and the survivors were surrounded deep in the mountains.
To continue their mission, to ask for reinforcements, to open negotiations with the enemy... Countless choices lay before them, but the mountain was silent.
Leaderless and without any supplies, the unit was on its last legs. With their morale flagging, thoughts of surrender shrouded many minds.
At this critical moment, Gorou stood up. He rejected negotiation and surrender, and instead proposed a bold plan.
They would not hide any longer. Instead, he would lead the larger part of the platoon in a feigned attack to buy the others a chance to call for reinforcements. Once those reinforcements arrived, they could perform a pincer attack together.
When asked what they should do if they failed, Gorou replied:
"If the enemy surrounds us any further, our options will be even more limited. The way I see it, we still have a chance, so we've got to give it all we've got."
"I'll take responsibility if the plan fails."
After holding the line for several days without rest, the exhausted Gorou and his companions were finally relieved by a force led by Sangonomiya Kokomi herself.
After that, he was promoted to serve as the captain of Gorgasia II, and from there he would work his way up to the rank of General.

In the eyes of the men, Gorou is a strict but humble general.
He is straightforward and easy-going, and he treats his subordinates like his own family, sharing weal and woe with them.
Sangonomiya Kokomi once told Gorou that materiel, supplies, and salaries were the three most important things to an army.
From that day on, he would personally explain weapon maintenance to his subordinates. Every time the granaries were opened, he would supervise the process strictly to prevent any unlawful deductions.
And as General Gorou, he will always lead from the front.
The sight of him charging at the tip of the spear is like a rallying banner, encouraging the troops behind him to continue advancing.
These are all reasons why the troops greatly respect him. As with Kokomi, Gorou greatly treasures the lives of his troops, but by contrast, values his own quite little.
Some who understand little of the thought process behind this occasionally joke that Gorou is a "kid" who doesn't seem like a general at all.
But to the soldiers of Watatsumi Island, this kid is the best general they could ask for.

Gorou is valiant and decisive, often leading inferior forces to victory over superior opposition.
However, he does have a shortcoming of his own \u2014 a sometimes unstable temper.
That is to say that the blood sometimes rushes to his head at the height of a battle.
War is cruel, and Gorou does indeed lack experience compared to veterans who have been scrapping it out on battlefields for decades.
Fortunately, he learns fast and is currently trying to make up for his various small failings.
Sangonomiya Kokomi often provides her various commanders with directives, but how they are used is up to the skill of the commander in question.
For his part, Gorou is always able to execute the courses of action that best suit the present situation from the directives he has been given.
Gorou believes that over time, he will come to internalize the concepts behind them. Perhaps then, he can take the field with even more confidence than before.

At Yae Miko's request, Gorou has taken up a certain extra "job" at Yae Publishing House.
With the end of the Vision Hunt Decree, and the successful negotiations between Watatsumi Island and the Shogunate, relations between the two sides are beginning to warm.
Gorou has also visited Narukami Island quite a few times to check out the changes, buy a few popular books, and go to Yae Publishing House to complete the task he agreed to help with.
Yae Miko set up an anonymous column for Gorou in the "That's Life" magazine. Here, readers will write about the things that trouble them and send them to Yae Publishing House, upon which Gorou will give them some suggestions.
Yae Publishing House will take special care to redact any personal information revealed on the part of the write-ins or Gorou's replies, and will replace real names with pseudonyms.
According to Yae Miko, she chose him because she'd heard that he often listened to his subordinates when they chatted about personal matters.
The column proved to be very popular indeed, but for whatever reason, every time an editor delivers the royalties to Gorou, they might sheepishly ask:
"Ah, speaking of which, Gorou, have you heard of Ms. Hina?"
"I've heard that she's a rather popular columnist, and a recent one, too. Is something the matter?"
"Oh, no, no... It's nothing..."

Just as the troops don't exactly tell Gorou everything happening in their lives, Gorou, too, has some troubles that are difficult to share.
For example, how his tail fur starts to get dull and look haggard after being exposed to the elements for too long, and how he'd love to tend to it \u2014 if he could only spare the time out in the field.
Or how he sometimes feels a bit inferior about his slight physique when bathing together with his subordinates.
Or about how encountering inscrutable women like Yae Miko sends him into defense mode instantly, rendering him unable to properly interact with them...
In trying to maintain a respectable image, Gorou refrains from telling his soldiers about such troubles.
And while they have been able to guess at his troubles to some extent, the Watatsumi soldiers often just play along and pretend that they don't notice.
As such, his worries just kept piling up, until the Traveler arrived, thus granting the Watatsumi general, ever good at banishing the worries of others, someone who could help relieve him of his own woes.

Of Gorou's various hobbies, "mountaineering" is likely up there in the top three.
Sweating it out while climbing a mountain with companions before admiring the beauty all around you helps to train both the mind and body and is a great camaraderie-builder.
To better enjoy this hobby of his, Gorou bought a set of mountaineering gear from a traveling merchant.
The set is not particularly pricey, but it is both sturdy and durable and has seen Gorou through many dangerous ascents.
Just as he maintains his weapons well, Gorou has also kept this set of gear in tip-top shape. There is little doubt that it will accompany him through many future journeys as well.

There was a time when Gorou ascribed responsibility for victory or loss in battle entirely to himself.
"If only I became a little stronger, perhaps I'd be able to turn the tide."
It was in this spirit that Gorou trained his archery day and night, hoping to rely on his strength to lead his comrades to victory.
But after some time on the battlefield, Gorou saw powerful warriors being isolated and captured alive, while weak troops in inferior positions could rout their enemies through unity.
That was when Gorou realized that a single person's battlefield capabilities are limited.
Getting stronger is important, naturally, but uniting the troops to fight as one is even more crucial.
A troop can only be unbeatable if they are strong together.
Having realized this, Gorou no longer pursued the apex of excellence in archery, but instead invested time and effort in those around him, helping everyone improve together.
Thinking back on it, this may have opened the door for Gorou to obtain his Vision."

Normal Attack
Perform up to 4 consecutive shots with a bow.

General's War Banner
Provides up to 3 buffs to active characters within the skill's AoE based on the number of Geo characters in the party at the time of casting:

Hold
Adjust the location of the skill.

"Take up this formation and we'll be safe \u2014 I guarantee it!" As a general and a leader of troops, the last thing Gorou wants is to see is those who follow him getting hurt.

Displaying his valor as a general, Gorou deals AoE Geo DMG and creates a field known as General's Glory to embolden his comrades.

General's Glory
This field has the following properties:

"We have the high ground!" Gorou can ever so slightly change the terrain of the battlefield to help win victory. This technique has seen him through many battles against seemingly superior opposition.

Heedless of the Wind and Weather

After using Juuga: Forward Unto Victory, all nearby party members' DEF is increased by 25% for 12s.

Gorou receives the following DMG Bonuses to his attacks based on his DEF:

Displays the location of nearby resources unique to Inazuma on the mini-map.

Rushing Hound: Swift as the Wind

When characters (other than Gorou) within the AoE of Gorou's General's War Banner or General's Glory deal Geo DMG to opponents, the CD of Gorou's Inuzaka All-Round Defense is decreased by 2s.
This effect can occur once every 10s.

Sitting Hound: Steady as a Clock

While General's Glory is in effect, its duration is extended by 1s when a nearby active character obtains an Elemental Shard from a Crystallize reaction.
This effect can occur once every 0.1s. Max extension is 3s.

Increases the Level of Inuzaka All-Round Defense by 3.
Maximum upgrade level is 15.

When General's Glory is in the "Impregnable" or "Crunch" states, it will also heal active characters within its AoE by 50% of Gorou's own DEF every 1.5s.

Increases the Level of Juuga: Forward Unto Victory by 3.
Maximum upgrade level is 15.

For 12s after using Inuzaka All-Round Defense or Juuga: Forward Unto Victory, increases the CRIT DMG of all nearby party members' Geo DMG based on the buff level of the skill's field at the time of use:

This effect cannot stack and will take reference from the last instance of the effect that is triggered.