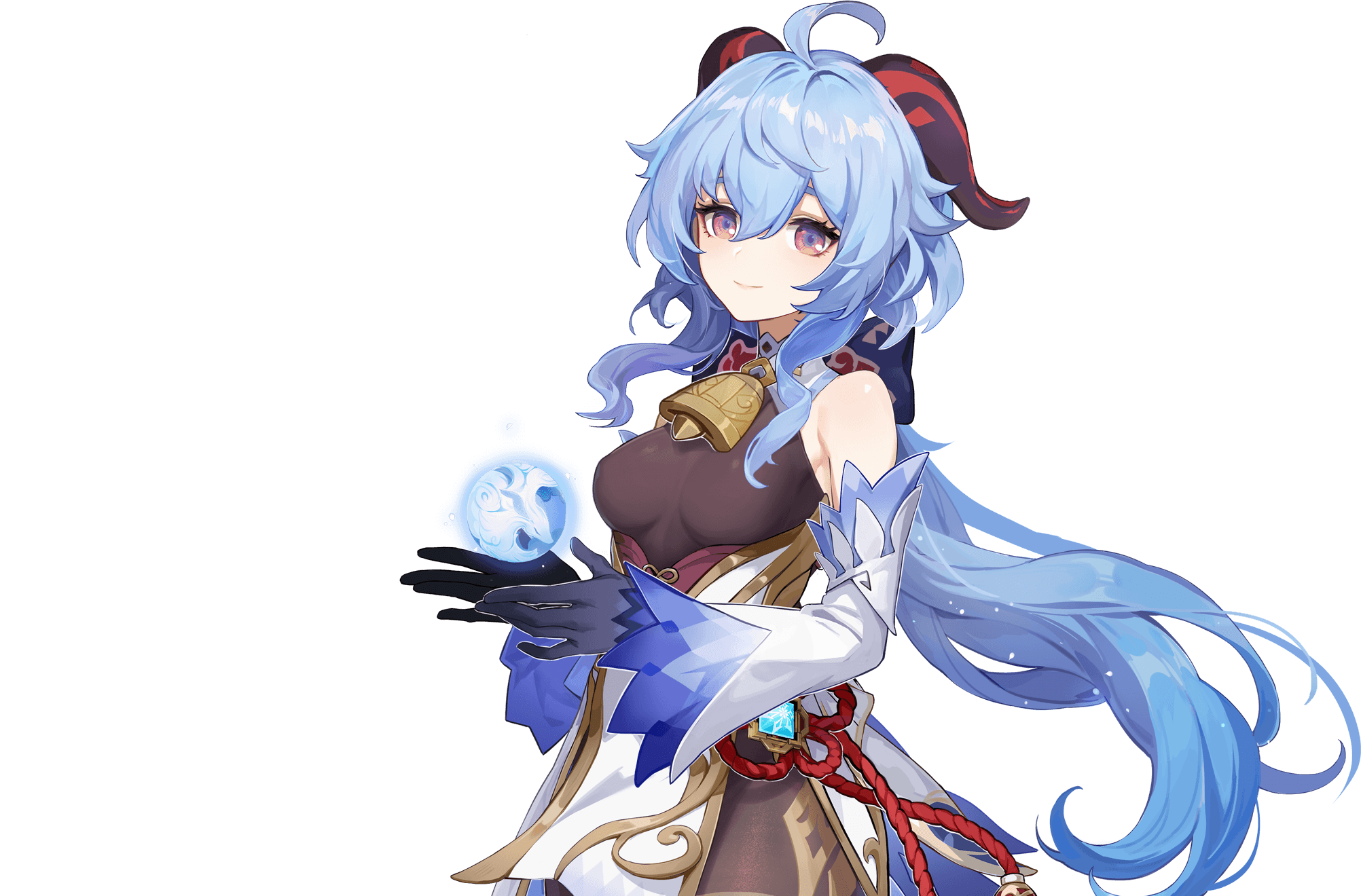 The secretary to the Liyue Qixing. The blood of both human and illuminated beast flows within her veins.
Graceful and quiet by nature, yet the gentle disposition of qilin sees not even the slightest conflict with even the most arduous of workloads.
After all, Ganyu firmly believes that all the work she does is in honor of her contract with Rex Lapis, seeking the well-being of all living things within Liyue.

The secretary at Yuehai Pavillion. The blood of the qilin, an illuminated beast, flows within her veins.

Though many in Liyue are fascinated by life in Yujing Terrace, its day-to-day operations and rules are a mystery to them.
They are aware that the Liyue Qixing are the cream of the crop who hold the fate of the city in their hands, but the calculations and data behind the Qixing's every decision are far harder to grasp.
The people understand that the new policies announced each year will change the dynamics of the market, yet none can comprehend how policy is plucked from complex meeting minutes and compiled into something easier on the human eye.
As the secretary of Yuehai Pavilion, Ganyu undertakes many tasks that ordinary folk do not see.
For those that have witnessed her standing by the dock at daybreak, enjoying her breakfast in silence, it is difficult to imagine her in such a post.
Even still, by the time the sun has fully risen, she will have returned to Yuehai Pavilion overlooking Yujing Terrace, to continue to fulfill her contract.
A contract that she signed three thousand years ago with Rex Lapis.

Ganyu is not the secretary of any one leader in the Liyue Qixing but is instead the general secretary for the entire organization. Under her gentle exterior, Ganyu is as persevering as stone itself. This was something that Rex Lapis, the leader of the adepti, noticed very early on. Thus when the Liyue Qixing first emerged ages ago, Ganyu was their secretary. Through the years and the changes in the Qixing's roster, Ganyu has remained by their side as a constant. This has also meant that the mountainous piles of paperwork from the various departments and bureaus in Liyue have fallen upon Ganyu's shoulders. But though her workload has increased seven, a hundred, or even a thousandfold, her sense of responsibility has never wavered. Someone once queried as to the source of her motivation and received an answer that was not quite congruous with the question. "What I've done... is nothing compared to what Rex Lapis has accomplished."

"I work for the well-being of all living things in Liyue."
Under almost all circumstances, Ganyu is a very trustworthy secretary.
It is hard to imagine anyone outperforming her in the face of such an enormous workload, especially given her unique and penetrating insights into all of Liyue's matters.
Nevertheless, her reliability can only be guaranteed under "almost all circumstances."
The more important the matter, the more Ganyu strives for perfection, and the more nervous she becomes. Under pressure, her nervousness does result in the occasional error.
One such incident occurred during the Rite of Descension, without doubt the most important annual event in Liyue's calendar.
Ganyu was three minutes late for the Rite and had to squeeze through the crowd in full view of all.
Later on, with a face as red as a tomato, she stammered her way through an unconvincing explanation, all the while apologizing profusely to Rex Lapis in her heart.
Her colleagues guessed that there must be some reason for the mistake.
Those who did not know her well saw that Rex Lapis did not mind, and thus paid the incident no attention.
Those closer to her worried in private, and asked if she needed a workload adjustment or a short vacation, but Ganyu refused.
"I spent two hours making sure that I wasn't wearing anything too similar to last year's Rite..."
Needless to say, Ganyu was not about to admit to this being the real reason for her tardiness!

How long is a thousand years?
Long enough for the Glaze Lilies that once teemed throughout Dihua Marsh to be wiped out by floodwaters, and long enough for the thriving settlement that sprung up upon Guili Plains to come to ruin in war.
How short is a thousand years?
To Ganyu, it has felt shorter than the blink of an eye.
Throughout a passage of time unimaginable to mortals, Ganyu has been working on all manner of things at Yujing Terrace.
She recorded the raising and demolishing of every building, and witnessed the rise to prosperity of every industry.
Ganyu's sense of objectivity towards the passage of time comes from the endless reams of data she must trawl through, and from the ever-increasing number of colors she finds that she needs to categorize it all.
All this time, her mindset has never changed — she constantly wavers between her human and adeptus halves.
On one hand, Ganyu the qilin finds it difficult to comprehend mortal squabbles.
But on the other hand, her human blood reminds her always to hold out hope that she might someday be able to fit in.

Outside the confines of her work, Ganyu very quickly shows how different she is from most other people.
She has a habit of taking afternoon naps and has a shockingly accurate internal clock. When lunch hour arrives, no matter where she is, she will simply curl up into a ball and fall asleep on the spot. Even the raucous dancing of hilichurls will fail to wake her.
These habits were at first just a running joke within the Liyue Qixing.
But once, after accompanying the then-Tianxuan to lunch outside the city, a well-fed Ganyu simply crawled into the nearest roadside haystack. She ended up being transported all the way to Dihua Marsh, awakening only after bumping her head during the unloading.
Unable to find Ganyu anywhere over the subsequent three hours, and knowing that she would not depart unannounced, the Tianxuan almost filed a missing person report.
After receiving a stern admonishment to "only take afternoon naps where it's safe," Ganyu retorted:
"Well... isn't everywhere in Liyue safe?"
Perhaps, with the mixture of human and illuminated beast blood flowing through her veins, Ganyu's understanding of the world's affairs is a little different to that of most humans.

Ganyu's qilin heritage is little-known in Liyue Harbor.
Whenever she is asked by someone walking along Feiyun Slope as to the obvious protrusions in her hair, she says that they are ornamental heirlooms.
"If I told them the truth, they would distance themselves from me..."
Despite never having been on particularly close terms with Liyue's citizens in the first place, Ganyu would still not consider distancing to be a good thing.
Her more important reason for hiding the truth is to prevent curious onlookers from touching her qilin horns.
After all, a qilin's horns are a sensitive part of their body, both physically and mentally speaking.
Another secret that Ganyu is anxious to keep hidden is the fact that she is watching her physique.
The qilin are strict vegetarians, but Liyue is a veritable powerhouse of gastronomical delights, one in which even vegetarians struggle to control their appetites.
Ganyu, who has grown accustomed to city life, is thus very vigilant in matters concerning her weight and physique.
Whenever she finds herself being drawn towards some delicious dish, she will attempt to reassert her self-control. For Ganyu, the difficulty of such a challenge is second only to finding a Flaming Flower atop Dragonspine.
But she is not one to give up half-way through the ascent.
During the Archon War, she once choked a giant monster to death with ease after getting lodged in its throat when it tried to eat her, said monster having fatally underestimated quite how wide her waistline was.
For Ganyu, avoiding any similarly embarrassing episodes in the future is an absolute must.

The Flora of Yujing Terrace

Handwritten notes detail the morphological features and behaviors of the plants in Yujing Terrace, with each beautiful stroke penned by Ganyu's own hand.
The notes are succinct, comprehensive, and well-categorized, and even offer some insights that one would be hard-pressed to find elsewhere on the market.
These include pointers on caring for Glaze Lilies and methods for grafting Silk Flowers.
In readability and scientific accessibility, they come close to the standard of official publications.
Or rather, this is the experience if one starts reading from the front.
Skip to near the end, however, and one may well be left dumbfounded.
The final few pages are a shocking rash of black ink and frantically scribbled-out text.
Reading patiently and painstakingly between the lines, one might just discover that these notes were, at one time, various methods for vegetable cultivation.
"But if I learn to grow vegetables, I'll be even less able to control my appetite."
Her hands balling into fists, it was with much difficulty that Ganyu erased the results of her research.
Later, whilst watering the plants on an empty stomach, Ganyu found herself plunging her head into a thicket of Silk Flowers, fantasizing that they were Sweet Flowers in an effort to comfort herself.
Many more fantasy Sweet Flowers followed shortly afterward during her afternoon nap...

Perform up to 6 consecutive shots with a bow.

While aiming, an icy aura will accumulate on the arrowhead before the arrow is fired. Has different effects based on how long the energy has been charged:

Fires off a shower of arrows in mid-air before falling and striking the ground, dealing AoE DMG upon impact

Trail of the Qilin

"You saw me, you say? You must be mistaken. I was working overtime then."

During its ability duration, the Ice Soul Gem will continuously rain down shards of ice, striking enemies within an AoE and dealing Cryo DMG.

Ganyu can bring down sweet rains as a matter of course. But against demons and heretics, they become bitter, freezing snow.

Harmony between Heaven and Earth

Preserved for the Hunt

Refunds 15% of the ores used when crafting Bow-type weapons.

A hit regenerates 2 Energy for Ganyu. This effect can only occur once per Charge Level 2 Frostflake Arrow. regardless if Frostflake Arrow itself or its Bloom hit the target.

Increases the Level of Celestial Shower by 3.

Enemies standing within the AoE of Celestial Shower take increased DMG. This effect stengthens over time.

The effect lingers for 3s after the enemy leaves the AoE.

Increases the Level of Trail of the Qilin by 3.

Using Trail of the Qilin causes the next Frostflake Arrow shot within 30s to not require charging.