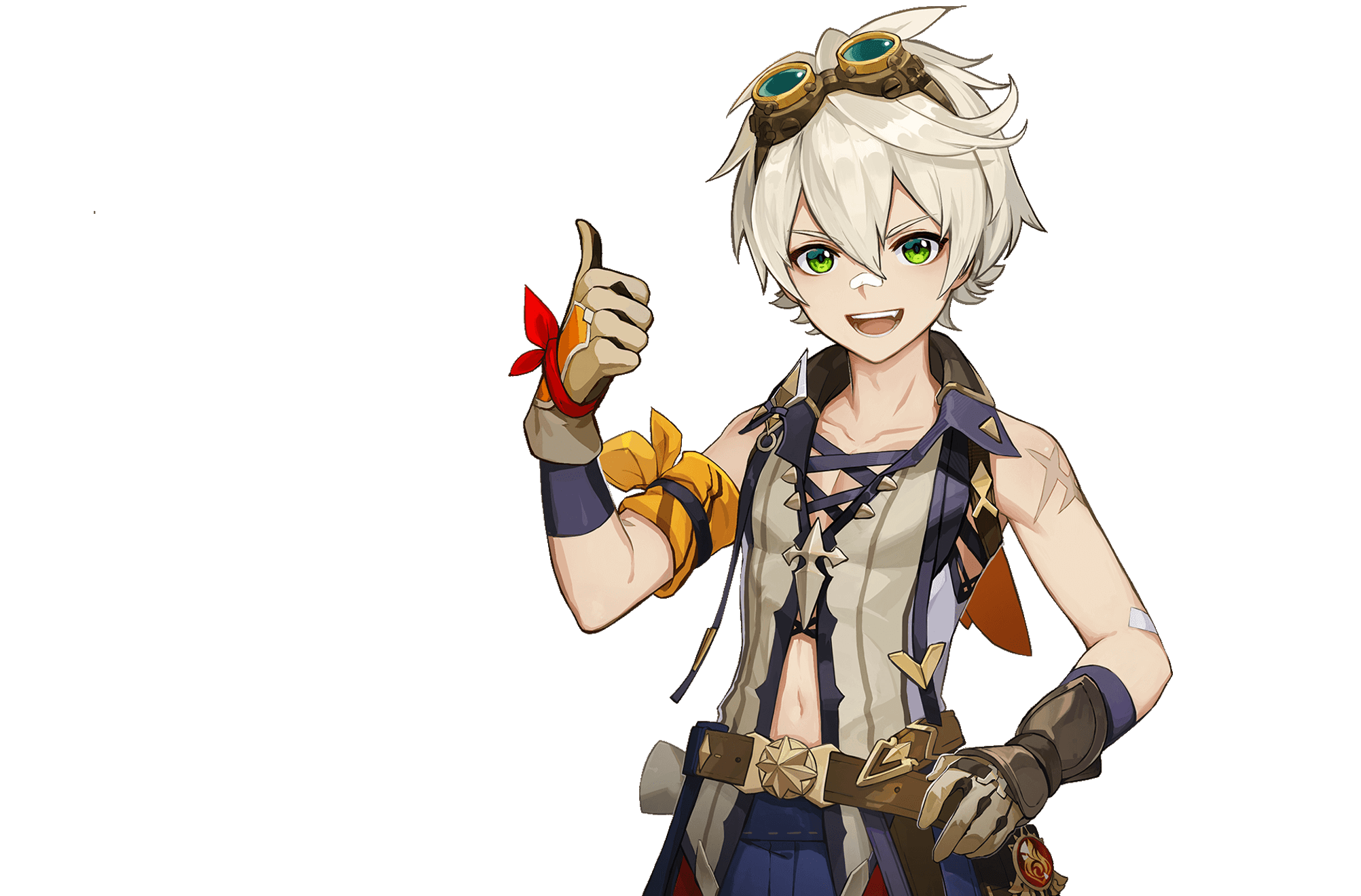 The few young adventurers that the Mondstadt Adventurers' Guild has always find themselves tangled up in baffling bouts of bad luck.
He is the only active member of his own adventure group, known as "Benny's Adventure Team," after all the other members decided to "take leave" following a series of unfortunate incidents. As a result, the team is currently on the verge of being dissolved.
Being unable to break the poor boy's heart, Katheryne of the Adventurers' Guild has kept ”Benny's Adventure Team" on the books, whilst also hiding from him the fact that all the other members have long since officially left the team.

A righteous and good-natured adventurer from Mondstadt who's unfortunately extremly unlucky.

Benny's Adventure Team is an exception to the norm in the Adventurer's Guild, Mondstadt Branch.
Initially, the team mechanism requiring at least 3 or 4 regulars in each team was set up to promote mutual support and prevent accidents.
As for Benny's Adventure Team, however, its only regular member has been Bennett himself.
The lack of team members essentially has everything to do with Bennett's infamous bad luck.
However, being the passionate adventurer he is, Bennett never feels lonely.
Well, maybe once or twice, sometimes...

The adventurer Jack was the first victim of Benny's Adventure Team.
Just a few feet away from the treasure, an extremely rare Geo Turbulence occurred, tearing the ground apart and opening a bottomless chasm right before everyone's eyes.
"So close, yet so far... like love."
Jack only suffered minor injuries, but he was never the same as an adventurer thereafter; the event seemed to have left him with a broken heart.
Another member, Royce, heard someone shout "heyo!" before losing consciousness in a huge explosion. The culprit, Klee, was sent to the confinement room for seven days for mistaking the cave the adventurers were still exploring in for a giant rabbit hole and blowing it up.
Heckler suffered from a severe bout of diarrhea for a week after joining the team. Although it turned out to be food poisoning, he insisted it was because of Bennett's bad luck.
"They'll be back! They're just... on leave. Please don't invalidate my team's registration with the Guild..."
Seeing Bennett beg and plead before her eyes, Katheryne sighed and decided to spare him the truth that his "teammates" had long jumped ship.

There was once a predicament of incomparable despair.
A predicament that had all but swallowed an old adventurer.
The scorching flames scalded his skin, the deafening thunder almost ruptured his eardrums, and the hollering winds threatened to rip his soul from him.
At the end of his hellish journey, what awaited him at the end was... a baby.
The old adventurer thought he was the first living thing to pass through this hell on earth. But how could he explain that which lay before him?
In that moment, it hit him, and he believed it to be true.
"This baby must be... a child abandoned by the world itself."
Though there were no mighty artifacts, jewelry, or gold, the old man's face did not seem disappointed in the slightest, for he regarded this baby, whose life hung by a mere thread, to be his treasure.
"This child is what I was meant to find on this journey," he thought as he took the baby into his arms.
Even if what he was about to do opposed the will of the world itself, he was unafraid.

The old adventurer died from severe injuries before being able to tell this story, leaving only the child he had saved.
On his deathbed, he only managed four final words: "will," "adventure," and "final treasure."
Several single, childless, old adventurers in the Adventurers' Guild in Mondstadt raised the child as their own and named him Bennett.
Being raised by the Guild, Bennett referred to everyone as "Dad."
"Dad, your dentures fell into the bowl!", "Dad, you should stop wearing that old leather armor. Where are the undergarments I bought you?", "Dad, it's raining, better keep your distance from me so you don't get struck by lightning!"
Taking care of all his aging dads who have no family has taken up most of his time outside of adventuring.
"The dads certainly have found a treasure, haha!"
Cyrus, the current Guild Master, laughed, giving Bennett a pat on the back.
Though he is unlucky himself, he can at least try to bring luck to those he cares about. At least, that's how Bennett feels.
Bennett the Unlucky still strives to find his own lucky treasure through his series of unfortunate events.

Oz the Raven, Fischl's familiar, said Bennett is "the most tenacious young man in the world."
Indeed, Bennett's share of bad luck throughout his life can be seen from his scars, old and new.
Attacked by monsters, buried in collapsed ruins, falling from cliffs... A wealth of "unfortunate events" has taught Bennett how to deal with more of them in the future.
Barbara, the Deaconess at the Church of Favonius, was once surprised by how skilled Bennett is at treating dislocated joints.
Another gift from his ordeals is his jaw-dropping talent for combat.
"Look at his moves... Doesn't that hurt?" Grand Master Varka of the Knights was extremely intrigued after seeing Bennett in combat.
It's not that Bennett doesn't feel pain, he has simply gotten used to it. He adapted to the pain as others would to pungent smells or blinding light.
Therefore, the way Bennett dives into battles head-on without reservation has become something of a signature of his.

What does death mean, exactly? Always walking the thin line between life and death, Bennett can't help but wonder.
Bennett knows that the old adventurer who saved him has left many praiseworthy stories and legends after his death.
He knows that an adventurer will not have weeping at their funerals, only toasts made in their names by old comrades.
He knows, to the adventurers of Mondstadt, a "good death" comes at the end of a life given to the pursuit of treasure and the secrets of the world. Once over, their souls are brought back to their homeland by Barbatos.
He once feared death.
However, after pondering on this matter some more, he now feels death may be something fortunate for an adventurer...
Not that fortune has anything to do with him.
"Onto the next treasure!" And with that, Bennett puts this thinking business behind him.

Whenever he suffers severe injuries such as fractures or excessive loss of blood, Bennett will go to the Cathedral to seek treatment from Deaconess Barbara.
"Sorry, it's me again..." Bennett will say, scratching the back of his head.
Barbara, however, will just shake her head, and with a "let's deal with those scratches as well," she will toss him some adhesive bandages.
Such displays of concern may be inadvertent, but they have a special place in Bennett's heart. He sticks those bandages on his wounds with the care of one pinning medals to their chests, before thanking her wholeheartedly.
Bennett keeps many such bandages in his utility pouch when he goes on adventures. Ones he gets from his Dads, from Barbara, from Katheryne... and from adventurers he sometimes meets by chance after getting injured.
These tiny tokens of goodwill form a tangible collection of fair fortune unique to Bennett.
"Well, since everyone's by my side, I guess I'm not that unlucky after all."

Bennett's passion for adventure is unstoppable.
He wants to constantly explore, challenge, sweat it out, and eventually grow old on the adventurer's path.
But there was once when he met with a true crisis.
Just as that old adventurer had so long ago, Bennett was in a predicament that would cause any other person to despair.
"Losing this much blood... Not good."
But Bennett did not stop. "There's no reason to turn back," he thought.
Somehow, he just knew that all the agonizing misfortune he had suffered up till this point was for the sake of overcoming this precarious position.
But at the end of his hellish journey, what he found at the end was — nothing at all.
"Ha, returning empty-handed is... part of an adventure. I... don't mind..."
At last, his tightly-wound emotions came loose, allowing his many injuries to rob him of his consciousness, and he collapsed.
When he reawakened, he found that his wounds had been cauterized by a mysterious flame, stopping both the bleeding and the pain.
A jewel pulsed warmly in the palm of his hand, its rhythm in time with the heartbeat in his chest — the beating heart of an adventurer.
This was not the mercy of the world, or that fate took pity on him. Rather, this was his "final reward," one befitting a person with Bennett's burning passion.

Bennett puts all his fire and passion for adventuring into his sword. Results may vary based on how fired up he is...

Hold (Short)
Charges up, resulting in different effects when unleashed based on the
Charge Level.

Bennett takes no damage from being launched.

An attack that combines Bennett's dreams and passion with Pyro. But passion is sometimes overblown, and Pyro sometimes blows over.

Benny's Adventure Team's adventures are always fraught with unexpected danger. However, Bennett is more inclined to call them "journeys full of wonder, excitement, and beauty."

Within the area created by Fantastic Voyage, Passion Overload takes on the following effects:

It Should Be Safe...

When dispatched on an expedition in Mondstadt, time consumed is reduced by 25%.

Fantastic Voyage's ATK increase no longer has an HP restriction, and gains an additional 20% Base ATK.

When Bennett's HP falls below 70%, his Energy Recharge is increased by 30%.

Increases the Level of Passion Overload by 3.
Maximum upgrade level is 15.

Increases the Level of Fantastic Voyage by 3.
Maximum upgrade level is 15.

Fire Ventures with Me

Sword, Claymore, or Polearm-wielding characters inside Fantastic Voyage's radius gain a 15% Pyro DMG Bonus and their weapons are infused with Pyro.