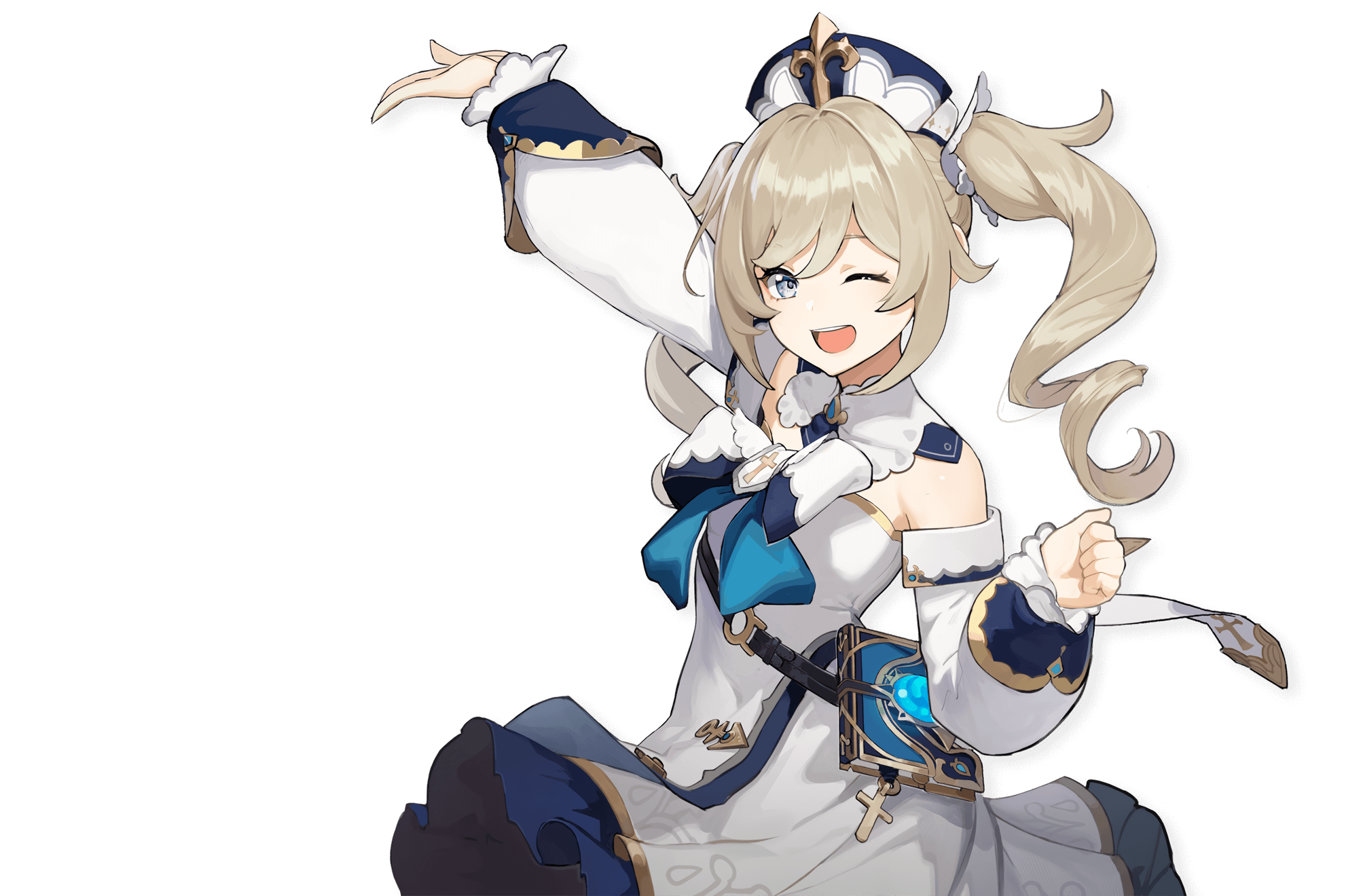 "The Deaconess of the Favonius Church and a shining starlet adored by all."
Although the concept of a starlet is rather novel in a city of bards, the people of Mondstadt love Barbara nonetheless.
"I owe everything to the city's spirit of freedom." — Barbara, regarding her popularity.

Every denizen of Mondstadt adores Barbara. However, she learned the word "idol" from a magazine.

As a currently obtainable healer from AR20, Barbara is a good addition to the team as a healer support.

Barbara is the Deaconess of the Church of Favonius, as well as the shining idol of Mondstadt.
"The sight of Barbara makes all my problems disappear." This is quite a common saying among the citizens of Mondstadt.
In fact, Barbara can do much more than just put people in a better mood: Her healing powers extend to flesh wounds and other physical ailments.
Barbara is known to have access to miraculous healing powers through her Hydro Vision.
However, Barbara herself knows that hard work is the most miraculous magic of all.

Every citizen of Mondstadt adores Barbara.
However, this has not always been the case. At first, Barbara's songs sounded strange to the citizens of Mondstadt, and many struggled to see the appeal.
This was because for the longest time, the folk songs of bards were the only popular songs known in Mondstadt.
Fortunately, Mondstadt stayed true to its reputation as the City of Freedom, and the people ultimately embraced the new while continuing to cherish the old.
People accepted Barbara's songs, and over time her positive energy rubbed off on them. Soon, they could be heard humming her tunes all around Mondstadt.
"Albert, would you stop please! You're completely out of tune!"

Barbara's feelings on her own success are mixed.
To the extent that an idol's duty is to make everyone adore her, she has done a fantastic job.
There is no doubting that she has made the right choice.
However, an idol is also expected to spread joy and relieve people's spiritual fatigue... Has she really accomplished that?
She sang for blind Glory, encouraging her to believe that her lover would one day return. She sang, too, for sick Anna, promising her that her illness would one day be cured.
Yet, the smiles on their faces never last long after the songs end.
This has led Barbara to become somewhat disillusioned and doubtful.

Barbara has always been a bright and optimistic girl since she was young. Though at times she can be a bit clumsy and mess things up, she always bounces right back and has another go.
Barbara is the complete opposite of her sister, who is seen by all as the pride of her family.
Unlike Barbara, her sister has always been the very definition of success in all aspects.
Initially, all Barbara had ever wanted was to surpass her sister in at least one thing, even if only once.
However, be it swordplay, her grades, or anything else, she was never able to compare.
Even for someone as optimistic as her, she found herself to be upset and down.
"Hard work is the most miraculous magic. But when even that doesn't work... what then?"

Barbara has never once considered giving up.
Her determination and resilience even surprised her father, Simon Page, the Cardinal of Daybreak.
Barbara only allows herself to be depressed for 30 seconds.
After that, she forces herself to brighten up, no matter what.
"I'm not so good in combat, so I'll be sure to support those who are."
Under her father's counsel, Barbara became a healer.
She is as radiant as the sick and injured are pained.
Her desire to be recognized gradually transformed into a simple desire to help others.

"Thank you" are the two words that Barbara hears most often.
When she feels lost, she will suddenly find that there is someone wanting to hold her hand.
"Thanks for being here with me. I feel so much better."
To Barbara, the greatest reward is seeing the smiles on people's faces.
Therefore, whenever she is massaging her swollen calves or drinking tea to care for her sore throat, Barbara recalls all those who have been kind to her.
"It's the encouragement I receive from others that keeps me going."
Just maybe, the smiles she receives are proof that her songs really can heal people.
Her ambition to surpass her sister and become the most popular person in all of Mondstadt hasn't been abandoned by Barbara, it is simply buried deep inside her heart.
"If only I excelled more, perhaps I could be of help to Jean."
This is what she believes.
"Okay... Barbara, go!"

"...Idol?"
The first time that Barbara heard this strange word, she was visibly confused.
"But... aren't The Seven the ones that people are supposed to worship?"
"Yes, but not exclusively..." replied Alice, an elder of the Hexenzirkel, as she groomed the young girl for stardom. "Read this, it contains everything you will need to know."
"Idol Magazine" was the name of the assigned reading material. Barbara had no idea what world this magazine had come from, but by reading it she found out that there was indeed such thing as an "idol," and that it mainly involved working hard at getting everyone to like you.
She also discovered that an outstanding idol is capable of not just bringing joy to themselves, but also bringing spiritual healing to others through the power of song and dance.
Barbara set about learning one new song after another, dancing to the beat as she went. Finally, she found happiness, and she found it in the smiling faces of others.
Some time later, when Alice anxiously relayed to Barbara that plans for "Teyvat Idols!" were falling through, Barbara was starting to make a name for herself through her performances in Mondstadt.
"Hmm... Well, if I'm the only one left... I guess you can leave it to me to define what it really means to be an idol!"
Driven by this ever so slightly selfish ambition to spread joy and healing to others, Barbara is slyly swotting up on new tunes behind the scenes to this very day.

The story of how Barbara obtained her Vision is hardly the typical tale of high-stakes heroism.
She had just joined the church and was looking after a little boy with a high and persisting fever.
Nothing Barbara could think of would console the boy and bring an end to his relentless tears.
Someone remarked that while the boy had already taken his medicine, there was no way to cure the pain of missing one's family.
Another suggested that Barbara sing a song for the boy to raise his spirits.
Barbara had never sung a song in her life up until this point, but how could she shy away from it in a moment like this?
"Never having sung before is no reason to abandon a child in their time of need," Barbara thought to herself.
And so, Barbara took the boy in her arms and sang him a song: a lullaby, the only song she knew.
It was an unceremonious beginning to her singing career. After quickly realizing that she barely knew any of the words, she had to resort to humming the tune instead.
Nevertheless, her voice began to soothe the child, and so she kept singing. She sang the same song, over and over again, until her throat was dry and her voice was hoarse. Finally, the boy fell asleep. Exhausted, Barbara lay down by the wall and fell straight asleep herself.
Early the next morning, Barbara awoke to discover that the boy's fever had come down. Perhaps it was because she had sung for him, or perhaps it had something to do with the Vision which had mysteriously appeared next to her hand at some point during the night.
Barbara was not preoccupied with the Vision, however. It was the sight of the boy smiling once again that filled her heart with joy.
Barbara received her Vision for the simple but beautiful wish that took hold in her heart that night: A dream of healing the sick through the power of song.

Normal Attack: Whisper of the Water

Plunging Attack
Gathering the might of Hydro, Barbara plunges towards the ground from mid-air, damaging all enemies in her path. Deals AoE Hydro DMG upon impact with the ground.

Barbara's music is the magic that heals her companions.

Heals friendly forces and all parties for a large amount of HP that scales with Barbara's Max HP.

Barbara's desire to heal strengthens her will to fight and sing.

The Stamina Consumption of characters with Let the Show Begin♪'s Melody Loop is reduced by 12%.

When a character gains an Elemental Orb/Particle, the duration of Let the Show Begin♪'s Melody Loop is extended by 1s.
The maximum extension is 5s.

When a Perfect Cooking is achieved on a dish with restorative effects, there is a 12% chance to obtain double the product.

Decreases the cooldown of Let the Show Begin by 15%.
During ability's duration, the current character gains 15% Hydro DMG Bonus.

Increases the Level of Shining Miracle by 3.
Maximum upgrade level is 15.

Attentiveness be My Power

Increases the Level of Let the Show Begin by 3.
Maximum upgrade level is 15.

Dedicating Everything to You

When Barbara is not on the field, and one of her party members falls:

This effect can only occur once every 15 mins.