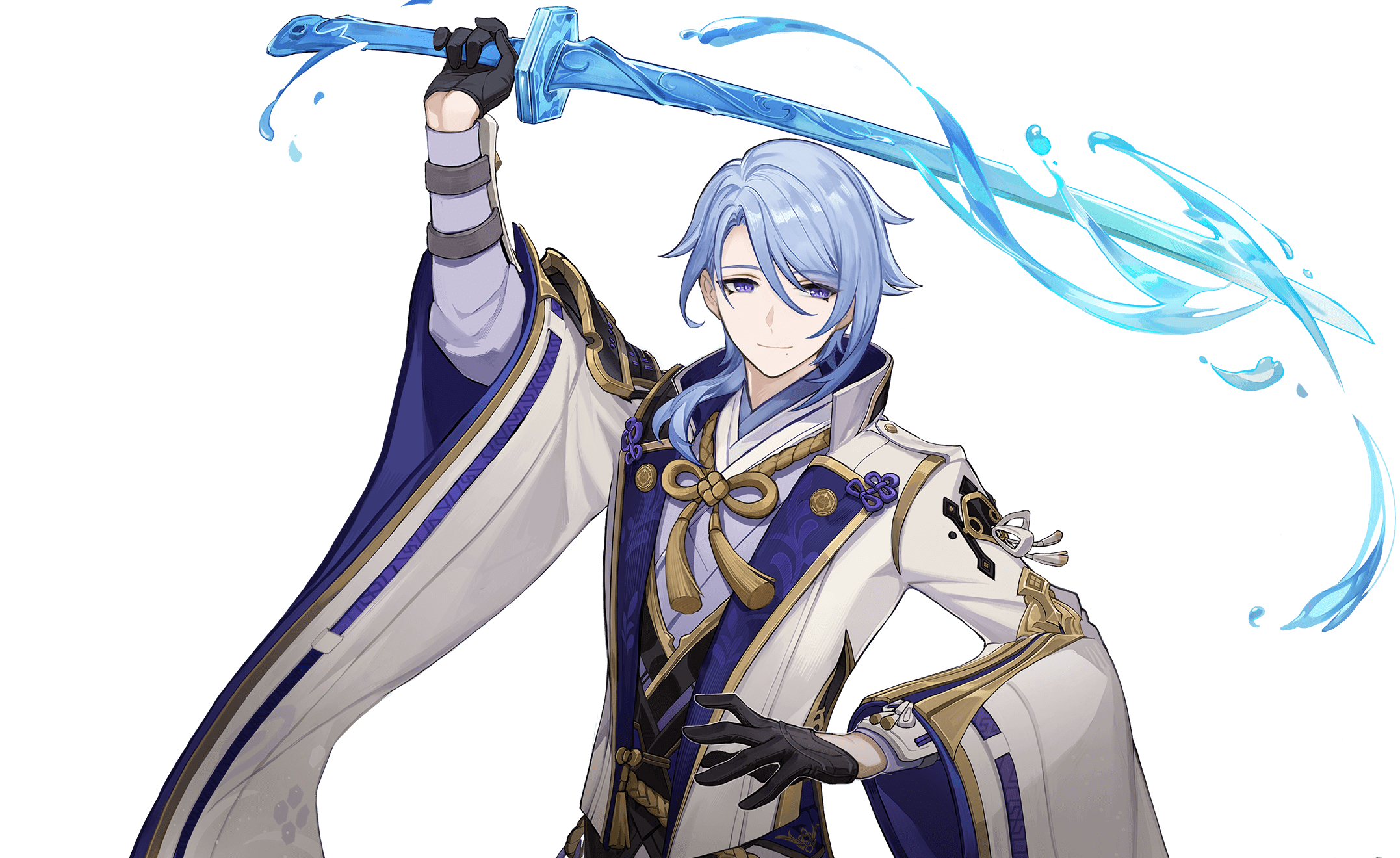 Current head of the Kamisato Clan and, accordingly, the Yashiro Commissioner. He always has a way of attaining his purpose in a well-thought-out manner. However, few people understand what that "goal" he holds most dear is.

The young but highly accomplished head of the Yashiro Commission's Kamisato Clan. Cultured and polite, he is a man of many ways and means.

As the head of the Yashiro Commission, Kamisato Ayato is committed to maintaining the prosperity and stability of the region.

At a glance, he is low-profile and graceful. He is not a fan of public appearances and does not seek to show his skills overtly.

But those who do know him understand that he is not to be underestimated. Long ago, when the Yashiro Commission fell on hard times, and when the Kamisato Clan was on the verge of crumbling, it was this young man who rose to the occasion and stabilized the situation.

He could not have achieved his position without extraordinary resourcefulness and cunning. But perhaps, that impenetrable smile belies darker waves.

However, the most intriguing thing is that in most of these negotiations in which he participates, he is not ruthless nor competitive, and is even willing to share the benefits so that everyone can get a relatively satisfactory piece of the pie.

"What exactly is he up to?" is usually what people are thinking after all is said and done.

However, now that everyone has a piece of that pie, perhaps what is on Kamisato Ayato's mind isn't so important.

Charged Attack
Consumes a certain amount of Stamina to dash forward and perform an iai.

Plunging Attack
Plunges from mid-air to strike the ground below, damaging opponents along the path and dealing AoE DMG upon impact.

Kamisato Ayato shifts positions and enters the Takimeguri Kanka state.
After this shift, he will leave a watery illusion at his original location. After it is formed, the watery illusion will explode if opponents are nearby or after its duration ends, dealing AoE Hydro DMG.

Takimeguri Kanka
In this state, Kamisato Ayato uses his Shunsuiken to engage in blindingly fast attacks, causing DMG from his Normal Attacks to be converted into AoE Hydro DMG. This cannot be overridden.
It also has the following properties:
\t-After a Shunsuiken attack hits an opponent, it will grant Ayato the Namisen effect, increasing the DMG dealt by Shunsuiken based on Ayato's current Max HP. The initial maximum number of Namisen stacks is 4, and 1 stack can be gained through Shunsuiken every 0.1s. This effect will be dispelled when Takimeguri Kanka ends.

Takimeguri Kanka will be cleared when Ayato leaves the field. Using Kamisato Art: Kyouka again while in the Takimeguri Kanka state will reset and replace the pre-existing state.

"When, I wonder, did you come under the illusion that you were winning?"
\u2014 Ayato is like this in both matter of martial prowess and political intrigue, but to preserve the dignity of his fellow Commissioners, he does not say such things to them. As such, only Thoma, Itto, and Ayaka have ever heard this line

Unveils a garden of purity that silences the cacophony within.
While this space exists, Bloomwater Blades will constantly rain down and attack opponents within its AoE, dealing Hydro DMG and increasing the Normal Attack DMG of characters within.

"I can see them, you know. The ripples of your beating heart within this realm of still waters."

Kamisato Art: Mine Wo Matoishi Kiyotaki

If Kamisato Ayato is not on the field and his Energy is less than 40, he will regenerate 2 Energy for himself every second.

When Ayato cooks a dish perfectly, he has a 18% chance to receive an additional "Suspicious" dish of the same type.

Shunsuiken DMG is increased by 40% against opponents with 50% HP or less.

Namisen's maximum stack count is increased to 5. When Kamisato Ayato has at least 3 Namisen stacks, his Max HP is increased by 50%.

To Admire the Flowers

Increases the Level of Kamisato Art: Kyouka by 3.
Maximum upgrade level is 15.

After using Kamisato Art: Suiyuu, all nearby party members will have 15% increased Normal Attack SPD for 15s.

Increases the Level of Kamisato Art: Suiyuu by 3.
Maximum upgrade level is 15.

After using Kamisato Art: Kyouka, Ayato's next Shunsuiken attack will create 2 extra Shunsuiken strikes when they hit opponents, each one dealing 450% of Ayato's ATK as DMG.
Both these Shunsuiken attacks will not be affected by Namisen.