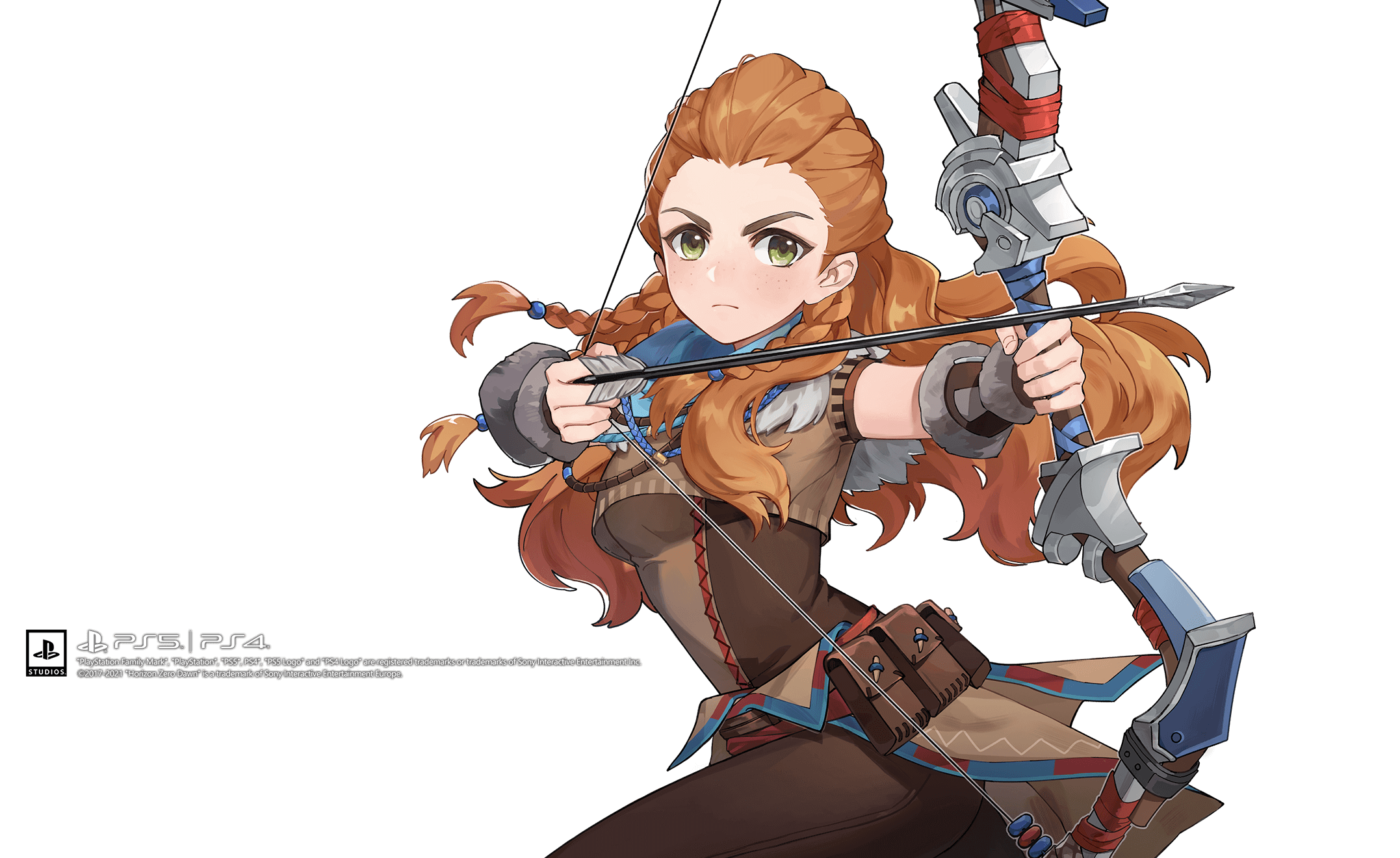 Formerly an outcast, now a hunter of unparalleled keenness. Ready to do the right thing with her bow at any given time.

Free character on PlayStation™ on version 2.1 or 2.3 for all other platforms.

Outcast, hunter of machines, Seeker, Anointed, Savior... Aloy had many identities in her original world, and she was destined on account of her genetics to be the heroine who would heal it.

Now, she has arrived in a new world, full of never-before-seen challenges, and once again, she throws herself gladly into the hunt.­­­­

Aloy was born an outcast, deeply rejected and feared by her tribe. She was raised in the rugged mountains near their tribal dwellings by the experienced Hunter, Rost.

He taught her how to hunt: to have cat-like form and deadly accuracy. And yet, he could not pass the most important thing onto her — the truth of her birth. Who were her parents? Why had she been cast out?

Unfortunately, the reasons for this were known only to the very High Matriarchs of the tribe who had exiled her.

There was only one way to discover the identity of Aloy's parents — victory at the Proving, the tribe's annual hunting contest, in which the victor would be free to ask for a reward.

She would train hard all her life for that event, but when the moment of trial came, the ritual would end in tragedy.

Mysterious assassins slew the participating Hunters, and it was only through Rost's sacrifice that Aloy was able to escape.

Later, Aloy would learn that she was the true target of the attack, for she had almost exactly the same face as an enigmatic, ancient woman.

Aloy knew that she had to find these killers to understand her origins.

Her pursuit brought her into a wild and dangerous world far beyond her imagination, bringing strange and powerful tribes, mysterious ancient ruins, and terrifying enemies — whether human or machine — before her.

In the end, the true enemy, HADES, appeared before her. It was an artificial intelligence filled with malice, bent on cleansing the world of all life.

There was only one way to defeat HADES: investigate her link with that ancient woman, that "Aloy from the past"... Or could she have been her mother?

Hot on HADES' trail, Aloy traversed a great many ruins from the distant past, and ultimately discovered her origin: she was not born of human flesh and blood but was the result of cloning.

The genetics of the woman who had saved all life 1,000 years ago had been the basis for her creation.

This had not only granted her the abilities she had possessed since birth, but had also guided her destiny, for this genetic material was the key to preventing the second coming of the apocalypse.

Armed with this knowledge, and with the help of allies from many tribes, Aloy was finally able to defeat HADES and its human and machine minions in a decisive battle in the shining city of Meridian.

After defeating HADES, Aloy embarked on a new journey, pursuing ancient technologies and cleansing the land that HADES had trampled underfoot.

In her long journey, she found every Old World Ruin that there was to be found in search of the Old Ones' lost secrets.

In one ancient, dilapidated laboratory, she found something she had never seen before — a gleaming portal. As she drew close, she was enveloped by powerful energies, and she saw her own image within the portal as one looking into a mirror, feeling as if she were in two places at once.

With a flash of light, the "world" that Aloy knew completely disappeared from her sight, and she now found herself in a strange, beautiful new world just waiting to be explored.

Normal Attack
Perform up to 4 consecutive shots with a bow.

While in the Rushing Ice state, Aloy cannot obtain new Coil stacks.
Coil effects will be cleared 30s after Aloy leaves the field.

You think that's cold? Guess you've never been to The Cut.

Aloy throws a Power Cell filled with Cryo in the targeted direction, then detonates it with an arrow, dealing AoE Cryo DMG.

Whether "Zero Dawn" referred to hope or extinction no longer matters. Aloy has already saved her world, and the fate of this one is still being forged by its own heroes.

When Aloy is in the party, animals who produce Fowl, Raw Meat, or Chilled Meat will not be startled when party members approach them.

Star of Another World

The time has not yet come for this person's corner of the night sky to light up.