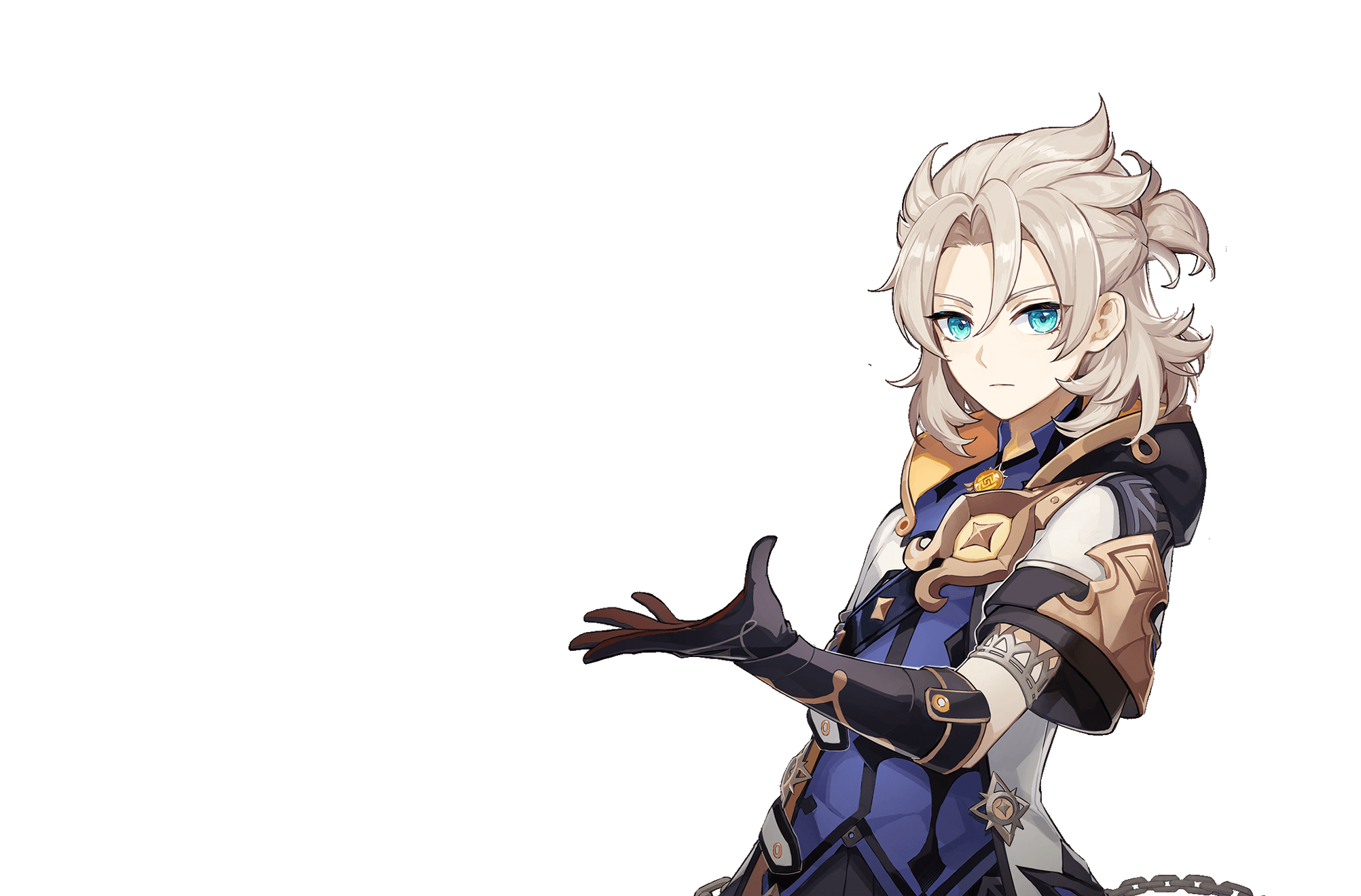 A genius known as the Kreideprinz, he is the Chief Alchemist and Captain of the Investigation Team of the Knights of Favonius. He is master of both of Sucrose and Timaeus.

A genius known as the Kreideprinz, he is the Chief Alchemist and Captain of the Investigation Team of the Knights of Favonius.

Alchemy is an ancient art, and many of its secrets have been lost to history.
The few commonly known alchemy techniques of today are but enough to put some broken odds and ends together, saving you the money you would have otherwise spent on glue.
"Nay, alchemy is not so ignoble an art!" Or so most alchemists would protest. But as far as the average citizen of Mondstadt was concerned, that was alchemy.
At least until the day Atbedo suddenly appeared and decided to stay in Mondstadt. This young man displayed the true prowess of alchemy to all, bringing with him a massive corpus of wisdom that even the Sumeru Academia did not possess. "The universe is heaven reversed, and the earth is a dream lost-to time. This is dust, the most basic form of complex life." As if to provide evidence for this claim, Albedo lifted the burnt ash of the flower that once grew atop a Dendro Slime's head. Seconds later, a Cecilia sprouted forth from the ash in his hand. "And this... is new birth."

Albedo has a very important job within the Knights of Favonius but does not often appear in public.
Still, he does not have the strange and eccentric temper that people tend to assume of academics. In fact, he is earnest in all his dealings.
He is, however, of the persuasion that it requires more energy to maintain relationships established on excessive enthusiasm.
As a result, Albedo's equivalent of friendship involves maintaining an appropriate degree of distance.
Whether shutting himself away to work or traveling and gathering materials, no one in Mondstadt knows how to find him.
Albedo's tendency to avoid social interactions does not make him a cold-hearted person.
He is sincere and contented when instructing his assistants, Timaeus and Sucrose.
He finds pleasure in giving his sketches to the citizens of Mondstadt.
Yet he cannot help but feel sincere disappointment that Lisa, for all her great talents, has chosen to remain a mere Librarian.

"Albedo only got into Mondstadt because of his master's recommendation letter."
On some level, this statement is true. Nevertheless, Monstadt's gates are ever open to all, and a recommendation letter is not strictly necessary.
Indeed, it could be argued that Albedo's life would have been far more comfortable without the letter.
This is because the recipient of the letter was the famed travel writer Alice, an old friend of Albedo's master Rhinedottir.
After receiving the letter, Alice considered its requests.
"So Rhine said that you'll need a laboratory... And not one of a size that a civilian could build, either. Hmm... I know!"
And just like that, she threw him into the Knights of Favonius.
The work of the Knights is actually quite easy for Albedo — requiring only five percent of his energy.
Albedo had imagined that the rest of his energy could be spent on experiments, with the Knights' full range of apparatus at his disposal.
And yet...
Alice had a daughter, named Klee.
Yes, "that" Klee.
"We'll be a family from now on, treat her like a real younger sister!"
From that day forth, remedying Klee's disasters would come to take up most of Albedo's remaining energy...

Albedo has no memory of any blood relations. From birth, he was already adventuring deep within domains with his master.
Of course, Miss Alice, the Knights of Favonius, and that traveler who had a sense of the stellar depths about them... They are all important. And yet his master is unquestionably the most special to him.
For Albedo, she is his only kin.
She was a cold and strict woman who raised him and taught him the secrets of alchemy.
"The universe is the dark essence of the true starry sky, and the earth is the accumulated memories of time and lives.
The chalk: that is you. The earth is where alchemy gets its name, and is the basis of all life. And this..."
She demonstrated her technique before him as a huge life form burst from its culture tank in a shower of shattered fragments.
"...This is new birth."

Albedo once led a simple and contented existence.
It was a life free of considerations, but dull in its monotony. His purpose centered on accompanying his teacher, executing her orders, and meeting her expectations.
But one day, deep in the heart of a dungeon, teacher and apprentice discovered an artifact known as The Heart of Naberius. From then on, his teacher disappeared, leaving naught but a single note, a recommendation letter, and a classical text.
Upon the note was written: Albedo, go to Mondstadt. Find my old friend, Alice, and give her the recommendation letter. Complete your final assignment.
The classical text was one of the last extant manuscripts of the Opus Magnum, which his teacher had kept with her.
If one were to push the definition a little, she had left him another gift — the title of Kreideprinz, and with it, the acknowledgment that she had nothing further to teach him.
In the past, Albedo's assignments had always been very difficult.
He had always believed wholeheartedly that his teacher would make good on her threat to leave him, should he fail.
But this assignment she had left to him was far too hard, far beyond the limit of his abilities.
Did this mean, then, that he was fated to never complete it, and thus never see his teacher again?
"Your final assignment: show me the truth and the meaning of this world."

The alchemy that Albedo commands is wholly different from any of the arts practiced in the Seven Nations of Teyvat.
Its lineage can be traced back to the nation of Khaenri'ah.
Khaenri'ah was an underground realm, and its natural fauna were few indeed. As such, its alchemy focused more heavily on the creation of life.
This art of creation was known as "The Art of Khemia."
Albedo had learned of this in his youth from reading his master's notes.
The next stage after "soil" is "chalk", which was also something his master had mentioned.
"Chalk is the spotless soil, and was used to make primordial man."
Now, Albedo understands alchemy in far greater depth than he did in the beginning, having also consolidated his understanding of knowledge.
"From soil was birthed chalk."
The profundity of this statement is well understood by Albedo.
Such incomprehensible statements are bound up in the memories of his master.
His master was not his birth mother, but Albedo has no doubt that his life stems from her nonetheless.
"I hope I'm not overthinking things. When parents tell their children of 'the meaning of this world...' They must mean living a happy life, right?"
From time to time, Albedo finds himself musing on this sentiment.

Albedo developed his drawing habit while traveling with his master.
At first, he would simply illustrate his notes. But eventually, he would discover that drawing the details helped him to understand the physical makeup of the objects he examined, being of great utility to his alchemical studies.
Indeed, drawing allowed him to enter a pleasant state of clarity — one in which the only things on his mind were his observations and the work in front of him.
Thus, Albedo became a master artist without ever having received formal training.
When strolling through Mondstadt, he enjoys capturing still life, particularly people in moments of joy.
Sometimes, he even gives his artwork to his unsuspecting "models," believing that such transient enjoyment, crystallized in a single moment, is something to treasure.
Albedo continued to refine his skills in this manner — until one day when he was taken aback by illustrations from Inazuma.
How was it that drawings of such generality could possess such narrative power?
Amazed, he decided to give it a go himself.
...Eventually, after collaborating with a certain novelist by the name of Xingqiu, "A Legend of Sword" was printed and published.
Unfortunately, it received middling reviews, being lambasted as "a dictionary with divine illustrations."

Gaining a Vision came as little surprise to Albedo. Indeed, when he received it, he gave it a single glance before carrying on with what he was doing before. He barely felt any wave of emotion at all, as if this was something to be taken for granted. As far as he is concerned, his Vision is merely a tool with which he can more conveniently conduct his research. That which truly sparks joy within him is turning the unknown into the known. One day, he will understand all there is to know about this world — and Visions themselves are no exception.

Solar Isotoma
Has the following properties:

Hold to designate the location of the skill.

This Geo bloom has an unusual property mirrored in the aim of alchemy. To rise from the earth, soar into the sky, and become the sun.

Under the Kreideprinz's command, the tectonic tide of creation seethes into life.

Transient Blossom generated by Abiogenesis: Solar Isotoma deal 25% more DMG to enemies whose HP is below 50%.

Using Rite of Progeniture: Tectonic Tide increases the Elemental Mastery of nearby party members by 125 for 10s.

When Albedo crafts Weapon Ascension Materials, he has a 10% chance to recieve double the product.

Increases the Level of Abiogenesis: Solar Isotoma by 3.
Maximum upgrade level is 15.

Active party members within the Solar Isotoma field have their Plunging Attack DMG increased by 30%.

Increases the Level of Rite of Progeniture: Tectonic Tide by 3.
Maximum upgrade level is 15.

Active party members within the Solar Isotoma field who are protected by a shield created by Crystallize have their DMG increased by 17%.