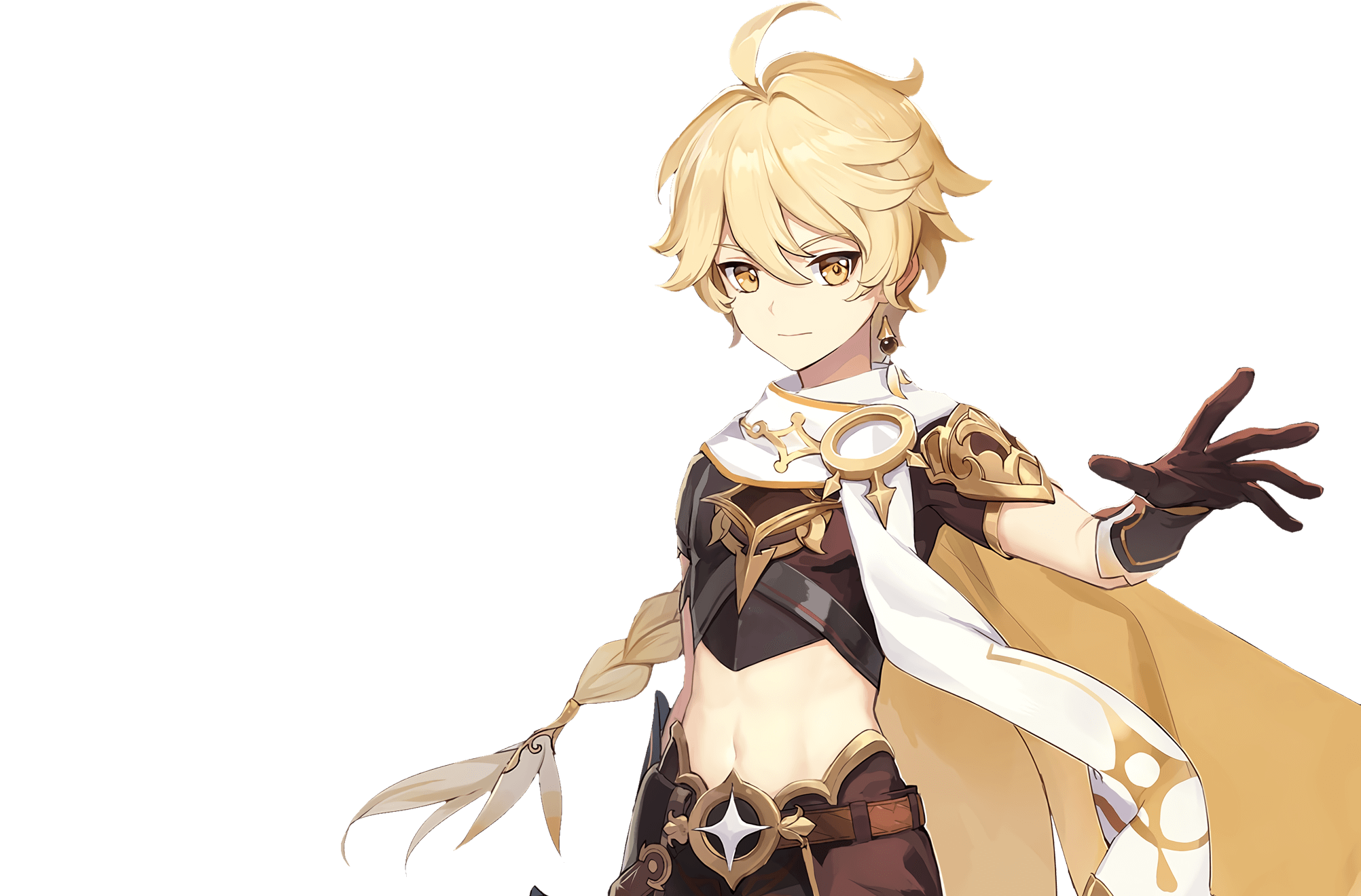 Aether used to be a world traveler with his sister, Lumine, until the day of their unfortunate encounter with the unknown goddess on Teyvat. Robbed of his powers, the surviving sibling starts his journey to find his lost sister.

A traveler from another world who had their only kin taken away, forcing them to embark on a journey to find the Seven.

Starting character at the beginning of the game if you choose to be male.

The keeper is fading away; the creator has not yet come.
But the world shall burn no more, for you shall ascend.

A boy and a girl stood amidst the tumult, under an unfamiliar sky.
You were a pair of traveling twins, passing through countless worlds during your journey.
Descending upon a continent named Teyvat, you hoped that you would be able to enjoy your time here.
But as you awoke among the falling stars, you saw the world in turmoil, a cataclysm raging across the land...
You sought to leave this place and move on to the next world, but then an unknown god stood before you, barring the way.
This deity was spotless, floating over a world of chaos.
Looking down on you.
The god took your only kin away, and you were sealed and cast into a deep slumber filled with nightmares...
When you reawakened, the world was changed.
The flames of war raged no longer, and nothing was left that looked familiar.
How long have you been asleep?
You had no answers.
Thus, you began a lonely journey, seeking the deity that you had once laid eyes upon...

After that, you met Paimon, and wandered together for some time.
You learned that this world has seven deities who rule the seven nations as the Seven Archons.
Your first stop was the free city of wine and song, Mondstadt, a city built by the Anemo Archon.
As you stepped into Mondstadt as an outlander, it was, as the other nations were, beset on both sides by non-human and human threats.
The non-human threat was comprised of the confederacy known as the Abyss Order.
The human threat, on the other hand stemmed, from the ambition of the Tsaritsa, god of Snezhnaya.
The Abyss Order had corrupted an ally of the Anemo Archon, the Dragon of the East of the Four Winds of Mondstadt.
The envoys of Snezhnaya, for their part, used this opposition to the Abyss as an excuse to put pressure on Mondstadt.
These threats from without and within caused the return of the Anemo Archon, who took on the form of a bard and joined you in your journey to save the dragon.
Yet there was something then that you did not see — for as the dragon fell to the Abyss, a certain figure had been reflected in its eyes...
The one who rules the Abyss.
He had once traveled with you, and you had once crossed many worlds together.

When faced with circumstances that they cannot control, humans often bemoan their  powerlessness.
But if a person is found to have surpassing ambition even as their life reaches such a desperate turning point, then the gods would look upon them with favor.
This favor is the Vision, an external magical focus given to those who have been  acknowledged by the gods which they can use to channel elemental power.
Celestia is the realm of the gods, and the wielders of visions walk the earth below. When they depart from this world, the chosen will ascend.
After coming to this world, you often hear people speak of such things.
You, for your part, can never receive a Vision, for an alien lifeform does not belong...
Is it wise to allow a moment's ambition to dominate one's entire life?
You have needed to consider many such thought-provoking questions, ones that require lengthy consideration, during your journey through many
worlds...

Info: To switch between the elements, you have to resonate with the regional statue and the main character selected as the current character. Go to a statue and select "Resonate".

Grasping the wind's might, you form a vortex of vacuum in your palm, causing continuous Anemo DMG to enemies in front of you.
The vacuum vortex explodes when the skill duration ends, causing a greater amount of Anemo DMG over a larger area.

You discuss the way to grasp the formless wind with Paimon.

Guiding the path of the wind currents, you summon a forward-moving tornado that pulls objects and opponents towards itself, dealing continuous Anemo DMG.

You and Paimon studied the flapping of a butterfly’s wings.

The last hit of a Normal Attack combo unleashes a wind blade, dealing 60% of ATK as Anemo DMG to all opponents in its path.

Palm Vortex kills regenerate 2% HP for 5s. This effect can only occur once every 5s.

You disgorge a meteorite from the depths of the earth, dealing AoE Geo DMG.
The meteorite is considered a Geo Construct, and can be climbed or used to block attacks.

Hold
This skill's positioning may be adjusted.

You spoke with Paimon about the final destination of falling stars.

Energizing the Geo elements deep underground, you set off expanding shockwaves.
Launches surrounding enemies back and deals AoE Geo DMG.
A stone wall is erected at the edges of the shockwave.
The stone wall is considered a Geo Construct, and may be used to block attacks.

You and Paimon debated the pulse of the mountains.

The final hit of a Normal Attack combo triggers a collapse, dealing 60% of ATK as AoE Geo DMG.

Plunging Attack
Plunges from mid-air to strike the ground below, damaging opponents along the path and dealing AoE DMG upon impact.

You and Paimon discuss the paths by which electricity might flow.

You call upon the protection of lightning, knocking nearby opponents back and dealing Electro DMG to them.

You and Paimon studied the light that flashes through the clouds.

Palm Vortex pulls in enemies within a 5m radius.

Increases the Level of Gust Surge by 3.

Increases the Level of Palm Vortex by 3.

Targets who take DMG from Gust Surge have their Anemo RES decreased by 20%.

If an Elemental Absorption occurred, then their RES towards the corresponding Element is also decreased by 20%.

Allies within the radius of Wake of Earth have their CRIT Rate increased by 10% and have increased resistance against interruption.

Will of the Rock

Increases the level of Wake of Earth by 3.

The shockwave triggered by Wake of Earth regenerates 5 Energy for every enemy hit. A maximum of 25 Energy can be regenerated in this manner at any one time.

Increases the Level of Starfell Sword by 3.

The barrier created by Wake of Earth lasts 5s longer.

The number of Abundance Amulets that can be generated using Lightning Blade is increased to 3.

When Falling Thunder created by Bellowing Thunder hits an opponent, it will decrease their Electro RES by 15% for 8s.

Increases the Level of Bellowing Thunder by 3.
Maximum upgrade level is 15.

Clamor in the Wilds

Increases the Level of Lightning Blade by 3.
Maximum upgrade level is 15.

Every 2 Falling Thunder attacks triggered by Bellowing Thunder will greatly increase the DMG dealt by the next Falling Thunder, which will deal 200% of its original DMG and will restore an additional 1 Energy to the current character.